Cavs vs Warriors: Who wins and how many games?

The Cleveland Cavaliers and the Golden State Warriors meet yet again in the NBA Finals. Each year, some change happened, but this year, more change happened on the Cleveland side than anything. Roster upheaval all season left their championship aspirations up in the air, but then the postseason happened and LeBron James took it to another level. Through the playoffs so far, James has averaged 34 points, 9.2 rebounds and 8.8 assists while playing over 41 minutes a game. He has been the driving force behind them making this year despite all the upheaval around him. As far as the Warriors, they were challenged just a little bit more this season. The Warriors were not the first seed and sometimes felt like they were disinterested in the regular season. They would look off some games and others be focused and ready to play. In the postseason, some of that has lingered, but they have always come up big in the moments they needed to show up. The latest moment they shined bright was in Game 7 versus the Houston Rockets in the Western Conference Finals. They went on one of their third quarter runs that have become synonymous for and totally took the Rockets out of the game. Kevin Durant and Steph Curry were the catalysts, as they were seemingly unstoppable. With Durant averaging 29 points per game and Curry averaging 24.8 points per game, the Warriors have two players that are hard to deal with and shut down. So with that being said, the fourth edition of the Warriors and Cavs is upon us and there has to be a winner and that winner is going to be the Golden State Warriors in five games.

Now let me be clear. I have been wrong before and probably will be wrong other times in my life on predictions. The Cavs do have a chance to win this series. Plenty have already written them off, but they do have a chance. Unfortunately, that chance is miniscule and they would have to have plenty of things go their way. First, they have to slow down the tempo of the game. Second, LeBron has to be otherworldly in this series, but he has to have others around him contribute more consistently. Third, their defense has to be better and more consistent than it has ever been. The list could go on and on with the things that have to go right for them. Now, it could go right for maybe one win, but the chances of it going right for four wins in this series are not very good. The Warriors simply have too many weapons and the Cavs are betting on one weapon going nuclear and others getting in on the action. While the postseason has shown us that LeBron can carry the lion's share of the work, it has also shown us that his supporting cast is as inconsistent as can be.

The Warriors, on the other side, have more of a margin of error in this series. They have been missing pieces and had players go absent in games and they still have won big games handily. The Warriors biggest enemy in this series is not LeBron James or the Cleveland Cavaliers. Their biggest enemy is themselves. The Warriors, when they are clicking on all cylinders, are very tough to stop. With that being said, they can be unfocused at times, undisciplined and downright sloppy on the court at times. We have seen that throughout the regular season and the playoffs. The key element for them in this series is to stay focused and stay on task with the mission: winning another title. With limiting the turnovers, defending to their maximum ability and moving the basketball, they should eventually be able to take down Cleveland. It will only be a matter or time.

The battle of East versus West will not be as captivating as it was the past three seasons. One reason is because people are not as captivated as they once were with this matchup. The second reason is this Cleveland team is not as good as ones in year's past, while the Warriors are every bit as good as they were last year when they want to be. They still have to play the games, but the task is daunting for the Cavs while the Warriors have plenty of margin for error. To the victor goes the spoils and to the best team goes the title. The Warriors will be celebrating back-to-back titles pretty soon. 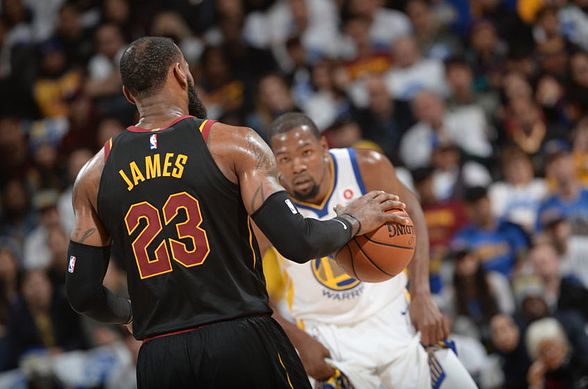