The Cleveland Cavaliers versus the Golden State Warriors was the matchup that everyone looked forward to at the beginning of the NBA season. Everyone thought they would meet in the NBA Finals for the Rubber Match between the teams and it was finally here. The Cavs powered through the Eastern Conference and the Warriors destroyed all competition in the Western Conference.  The anticipation and energy in the arena was bananas and the Golden State Warriors and their energy on the floor consumed the Cavs as Kevin Durant led them with 38 points on an efficient 14-26 shooting. Everyone will definitely talk about this game and what Cleveland had done to them. Golden State is a very difficult team to keep up with offensively and defensively. But when you don't help yourself in the game, it makes things even more difficult. The Cavs got beat and you cannot take that away from the Warriors at all. However, what you can take away from this game is the Cavs definitely did not help themselves out at all. That type of lackluster play on both ends of the court will not serve them well in this series and if it continues, they will be sitting at home in four games straight. Looking at the game, there is plenty that needs to be cleaned up.

The first thing that has to be better next game is the rebounding. The Cavs have been solid on the glass throughout their entire playoff run. They have benefited by getting extra possessions and easy offense from defensive rebounds. This series was especially important in the rebounding department. Cleveland being able to rebound would slow down the game a little more to the pace that they would have to play to win as well as slowing down the pace of the game. At the end of the game, the Cavs may have had more rebounds than the Warriors, but there was no way they were good enough on the boards. The Cavs seemed to be a step slow defensively to rebounds. One key sequence of the game that says it all about their rebounding effort was when there was a missed shot and LeBron James had a chance to get the rebound. He did not get the rebound and that was because Steph Curry outworked him for the rebound. That is not supposed to happen, but that was indicative of how they did defensively on the boards. On the offensive end, Cleveland usually gets a great effort from Tristian Thompson. The physical force for the Cavs usually gets offensive rebounds that breaks a team's back. In this game, he was as silent as a church mouse on the offensive boards. He had three offensive rebounds, but they were not nearly as impactful as they usually are and it seemed like he was just absent there. If he is going to have that type of performance, then the Cavs may as well take him out and put more offense on the court. His job is to muck it up and be a force on the boards and he certainly was not that on Thursday night.

Along with the offensive and defensive boards being awful for the Cavaliers, they certainly were not good on defense in terms of protecting the paint. Now we all know the Cavaliers were not the greatest team defensively all year long, but they had been very solid on that end of the court in the playoffs. In just one game, it seemed like they forgot all that worked for them to make it to the NBA Finals. The Cavs were so worried about the three-point line that they practically parted the Red Sea for Kevin Durant to attack the rim for easy dunks multiple times. Now we all know that Steph Curry can shoot threes and get on a role and we know Cleveland does not want to leave him open. But for Cleveland to not stop the basketball on numerous occasions is just inexcusable. Stop the basketball. It is a simple basketball thing that plenty basketball players learn at a young age. When you start giving the Warriors easy attempts like that, then of course you won't be able to stop them and with a guy like Durant, easy dunks get his confidence going even more than before. Coach Lue will probably be showing all those missed assignments over and over to his Cavaliers team to get them to get the point about the importance of defense and stopping the basketball. The Warriors don't need any help winning a game, so why help them? Giving up 56 points in the paint cannot happen when you're trying to win a game.

Valuing the basketball is something that is always a winning thing to do. The Warriors played well defensive during the entire game. They were switching defenders and made LeBron James work for every point he got tonight. Along with that, the Warriors were good on the defensive boards. But one thing that helped them beat down the Cavs in Game 1 was the turnovers. The Cleveland Cavaliers had 20 turnovers for the game, including eight by LeBron James. The Cavs were careless with the basketball and against the Warriors, that is like throwing gasoline on a fire. But along with the turnovers, the long missed shots were like turnovers as well. The Cavs shot 35% for the game and were missing a lot of long jump shots. On that type of miss, the Cavs should have some floor balance to combat the Warriors coming right back at them. But instead of having that, the Cavs were stuck in quicksand, forgetting to get back and allowing easy baskets and dunks. For the Cavs to have a chance next game, there cannot be that level of turnovers. LeBron James is a great player, but he was not great in that aspect.

Another issue offensively was the contributions of everyone around LeBron and Kyrie. LeBron may have had a rough turnover game, but he still had 28 points. Kyrie may have had 24 points for the game, but he did not have the type of impact on the game that many expected. Other than these two, there was no one really effective on that end. Guys like JR Smith and Kyle Korver are supposed to be shooters. Both went a combined 1/7, including 1/5 from three-point range. That cannot happen at all for the Cavs. Along with that, Kevin Love has to also be better for the Cavs. He started off pretty solid and he was solid on the boards in the absence of Tristian Thompson. But on the offensive end, he just could not get it going consistently, as he finished with 15 points on only 4-13 shooting. That may get it done in other games for the Cavaliers, but in this type of matchup, they need more from him. Others players did not show up tonight as well, but these three along with Kyrie did not really show up consistently in this game. That production is going to have to be there if they are going to win Game 2.

With all that went wrong from the Cavaliers prospective, it was only one game and the Cavs can come back and win Game 2. But one thing is very clear: they have to be better. This type of performance will get them swept if it continues. 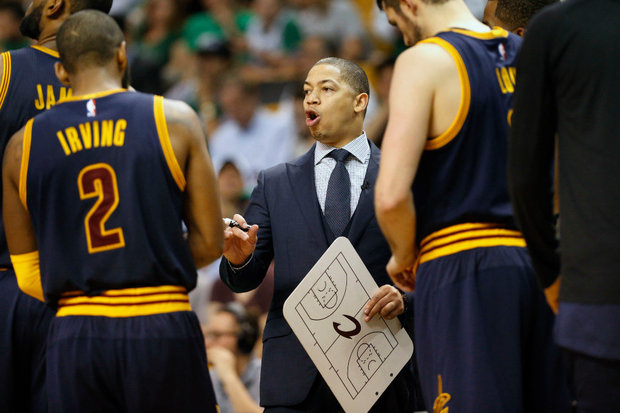