A change of scenery does not guarantee a Cavs win

The Cleveland Cavaliers had some good feelings and some awfully bad ones after Game 1. They stuck in the game all night in Game 1 only to see their chance to win crumble in between their fingers due to mistakes and missed opportunities. So going into Game 2, the Cavs felt they had a chance to get at least one game out in Oakland. That optimism lasted all but a quarter and a half, as the Warriors made some adjustments and took control of the game on their way to blowing out the Cavs. The feelings of potentially being able to be in this series seemed to transition to looks of frustration. So now the series switches to Cleveland and the Cavs could get some home-cooking. While some may think it's just as simple as returning home, the Cavs have to do much more than just show up to win what would be their ninth in a row at home in the playoffs.

One thing Ty Lue may want to look at is his subs he is playing. He is getting energy from Larry Nance and Jeff Green has given them some scoring off the bench so far, but the Cavs are getting hurt by two subs they continue to play. Jordan Clarkson is a talented player, but right now he cannot find the basket. He is 3-13 from the field so far in this series and although he has been scrappy on the defensive end and made a few plays there, he is still not giving the Cavs what they need. Clarkson is struggling, but he's not the only one struggling off the bench. Kyle Korver is one of the best shooters in the NBA, but right now he cannot buy a basket. He is currently averaging two points per game in this series, cannot get open for shots and he is a liability on the court. Both have been bad in this series and yet, Lue has stuck with them. In this case, Lue has only two option. He can stick with Clarkson and Korver, hoping they can break out at home in the friendly confines of Quicken Loans Arena. Of the other option is two guys that are on his bench replacing them in the rotation: Cedi Osman and Rodney Hood.

Both Osman and Hood have been getting garbage minutes in the playoffs for a couple series now. Hood has the ability to produce, but he has admittedly struggled playing next to LeBron James. With him being a restricted free agent this summer, he could look at a chance to play in the rotation as a chance to make a difference for Cleveland on the comeback trail. His athleticism, size and ability could help the Cavs match up more with Golden State and give them problems. The only question is can he make a shot, because he has struggled to find the rim himself down the stretch of the season and has looked to be lacking confidence. As far as Osman, the international rookie has had his ups and downs this season. He could not get playing time and then jumped into the starting lineup, helping the Cavs get wins. Cedi may not be the best when it comes to shooting, but he provides energy and he seems to make plays whenever his number is called. Neither Hood or Osman could play point guard, so LeBron could slide to the point guard spot and allow them to do what they do. Both of them may not get some action, but one of them could potentially make a difference if given an opportunity.

Other than personnel, another issue the Cavs have to get a handle on is their defensive rotations. In Game 1, they closed out to shooters very good and they also were communicating when in helpside position and also when switching defensively pretty consistently. In Game 2, it seems like Cleveland forgot all those defensive principles the used in Game 1. While people were focusing on Steph Curry hitting incredible three-pointers, they may have missed the horrible closeouts, closed mouths on defense and the pointing that was going on between Cavs defenders. Lue has to get them all in the film room and remind them of what they were able to do for most of Game 1 when it came to rotations and contesting shots. Then maybe they will give themselves a better chance to win Game 3.

Potential changes in the rotation and defense could be something to jumpstart the Cavs and get that first win in the NBA Finals. Essentially, it is not only on LeBron and the players but Lue to make those adjustments to get the most out of his team. Hood did quit on the team earlier and he has been struggling, but we have seen postseason heroes come out of nowhere and just maybe he or Osman could be lightning in a bottle if Lue calls their number. The other extreme could be Hood being who he was towards the end of the year and not giving them anything at all along with Cedi being ineffective. The chess match has been dominated by Steve Kerr an the Warriors so far, but now is the perfect opportunity for Lue and the Cavs to strike back. We shall see what changes he does or does not make. 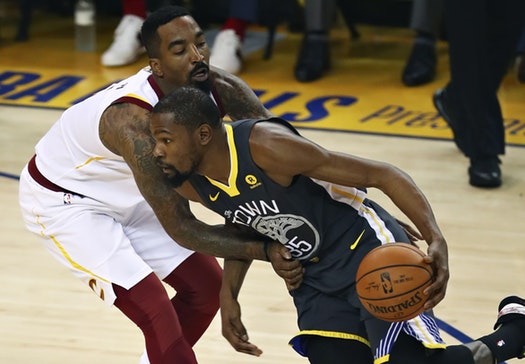