An Unexpected Lineup Change Makes A Big Difference For Cleveland

Heading into Game 3, the prevailing thoughts were not about Golden State winning but how many games they would win the series in. They dominated the Cavaliers in Oakland, making quick work of them in Games 1 and 2. And in Game 3, there were many wondering if the Cavaliers would even show a pulse. They definitely seemed to be playing dead in the first two games. But along with the Cavs trying to figure it out against Golden State, they had a situation going into Game 3. Starting power forward Kevin Love was going up for a rebound in the second quarter of Game 2. While he was going up for the rebound, Warriors forward Harrison Barnes inadvertently caught an elbow the back of his head. The blow sent him to the ground. He got up eventually but exited the game in the third quarter. And during the game, he was entered into the concussion protocol. Would he or wouldn't he play was the question leading into Game 3 and we finally got that answer Wednesday, confirming that he had not yet passed concusion protocol. Of course, there was some wonder as to who will replace him, but the decision ended up being an easy one for Cleveland.

Richard Jefferson has had a pretty successful career. But after being on four teams in the last four years, many thought it was over for his time in the NBA. But the Cavaliers thought otherwise and signed the veteran forward to a one-year deal to be a part of their team. When he was signed, many did not even think of him as an asset to the team. And for much of the season, Jefferson was pretty quiet and there was not much heard from him. But as the Cavs got deeper in the playoffs, the appearances of the veteran got more and more frequent. And in the NBA Finals, he had essentially been the only guy that has played well off their bench. But with Love out, Tyronn Lue made the move to start him to replace a concussed Kevin Love. And that move provided a dynamic that Cleveland had been missing. Offensively, Jefferson was active. He was attacking the rim and he was also active on the boards, collecting eight rebounds in 33 minutes. His activity in there helped Tristian Thompson on the offensive boards because even though he did not grab all rebounds in there, he occupied more people to help free up Thompson. But even more than his offensive effect, his defensive effect was felt across the board. Jefferson is a better defender than Love is and that allows the Cavs to not have to overcompensate for the effect of having Love out there. They could essentially switch almost everything because everyone was playing solid defense, including Kyrie Irving. The Cavaliers would go on to win Game 3 120-90 in front of their home crowd. The synergy seemed to be right for the Cavs with Jefferson joining the starting lineup. But what happens when or if Kevin Love comes back Friday night?

Kevin Love still has to get out of concussion protocol first and foremost. And that protocol could still be going on until Friday at the latest. But say that he is available, some may say he has to get his starting spot back. And that very well could happen. But if Tyronn Lue is in tune with how his team played tonight, then he will bring Love in off the bench. The team got off to a better start on both ends with Jefferson in there. The energy was better, the defense was better and the offense had more pace and flow to it. With Love in there, the Cavs have been stagnant and the defensive end has been lacking because Love has been taken advantage of. With Jefferson starting and Love coming in off the bench, the Cavs get something they have not had all series long: bench scoring. Love against backup players could come out and give them double-figures off the bench. And that production could be huge for the Cavs off the bench. Cleveland needs something off their bench eventually because the Golden State Warriors have outscored them each game off their bench and it has not even been close. Love gives them that shot in the arm they would need off the bench. Now this all sounds like a good idea, but it all depends on Love how this works. Love has to accept this as a chance to have a better effect on the series and a better way to help his team win the series. If he views the change that way, then the change should go smooth. If he causes a stir if he has to come in off the bench, then that is where the issue may arise.

Last year the Warriors were down 2-1 in the playoffs last season when they made the adjustment to go even smaller and put Andre Iguodala in the starting lineup and take center Andrew Bogut out. That change led them to winning the series versus the Cleveland Cavaliers last year. Could the change to Richard Jefferson starting help make a championship push for Cleveland? Maybe or maybe not but we will see what happens. The Cavs are still down 2-1 even with the big win, so there is still work for them to do. We shall definitely see what happens. 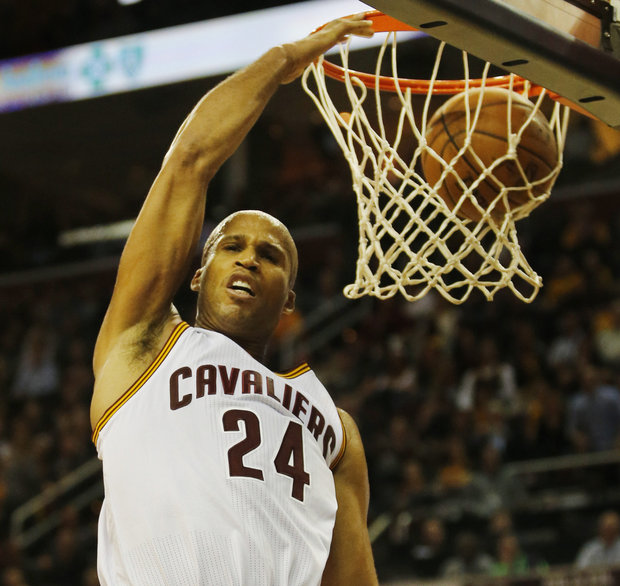