The Houston Rockets were one win away from defeating the Golden State Warriors. Then, Chris Paul gets hurt and the Warriors come out fighting for their playoff lives, leading to the Rockets eventually falling to the Warriors in seven games in the Western Conference Finals. The Rockets/Warriors series had a lot of "what ifs" attached to it in regards to the health of Golden State's Andre Iguodala and Houston's Chris Paul, but the fact remains that Houston had their chances and could not pull it off. Heading into this offseason, the Rockets are trying to get better with one goal in mind: winning the NBA title. That goal became a little harder with the salary cap and the questions they faced this offseason. A couple of those questions have been answered in good and bad ways, but now another one arises in the potential acquisition of Carmelo Anthony. The veteran forward has been rumored to the Houston Rockets when it was first announced that he and the Oklahoma City Thunder were going to part ways this offseason. With him landing there potentially, how does he fit?

Offensively, we know that Melo is still a talented player. He had a down year last season, but even with that, he averaged 16.2 points per game. Compare that amount of scoring Houston got from their starting small forwards over last season of 17 points per game and he meets exactly what they do on that end of the court easily. Add in the fact that he shot almost 36% from the three-point line and that could make him even more dangerous on the Rockets team. The spacing that is created by the pick-and-roll and the philosophy of Mike D'Antoni of either getting a layup or a three-pointer would allow Melo to have more open shots than he has had in a long time. He could essentially play just like he does when he plays in the Olympics, not having to work as hard offensively to get good shots while catching passes in rhythm to shoot the basketball. His presence as the third option could make the Rockets even more explosive.

While the offensive imagination could run wild with Carmelo on the team, there are some issues that have to be ironed out. One of those issues is Melo likes to hold the basketball. Isolation basketball works for Houston, but only when quick decisions are made. As we all saw, when the Rockets started moving the basketball and making quick decisions offensively, they put pressure on the Warriors in the Western Conference Finals. Melo can be a ball-stopper and that can be detrimental to the offense, especially if he is not getting others shots off his isolations. Melo has to focus on making a quick move or getting rid of the basketball. Along with the quick decisions, he has to mold himself into what D'Antoni wants. Both have a bad past with each other and obviously he would have to get over that with D'Antoni to play there, but along with that, he also has to become the player D'Antoni wants him to be in the Houston offense.

Defensively, the prospects of Carmelo are not good. Over his career, Carmelo has never been known for defense. He has always been able to score, but he has never really been able to keep others from lighting it up on the other end of the court. With Capela back behind him (assuming he re-signs with the Houston Rockets), that presence will help cover up his defensive shortcomings. Ultimately, the Rockets will need him to play better defensively or at least show more effort. If he is able to show the type of effort he showed in Oklahoma City at times, then he will be able to stay on the floor longer. If not, then he will be right back to giving up what he gets on the offensive end of the court.

The reality in bringing in Melo is the Rockets will be getting worse defensively. Melo does try, but he is just not a great defender like what Houston had last season. Guys like Trevor Ariza or Luc Mbah A Moute are not names that many people bring up a lot, but they were invaluable to the Rockets defense last season. They dug in and took the best perimeter defender more times than naught. As a result, the Rockets got better defensively last season and that propelled them to be as good as they were. With Melo, they take a step back in the defensive department and that gives them two defenders to worry about in James Harden and Anthony.

The gift and the curse of Carmelo Anthony is essentially his offense and his defense. With the Rockets wanting him so bad, they will have to take the good with the ugly from him. The question is will his addition help them get closer to defeating the Warriors? As of right now, they still have some work to do, but you never know what could happen. One thing you do know is they will love the Melo addition offensively but miss Trevor Ariza and Luc Mbah A Moute on the defensive end of the court. 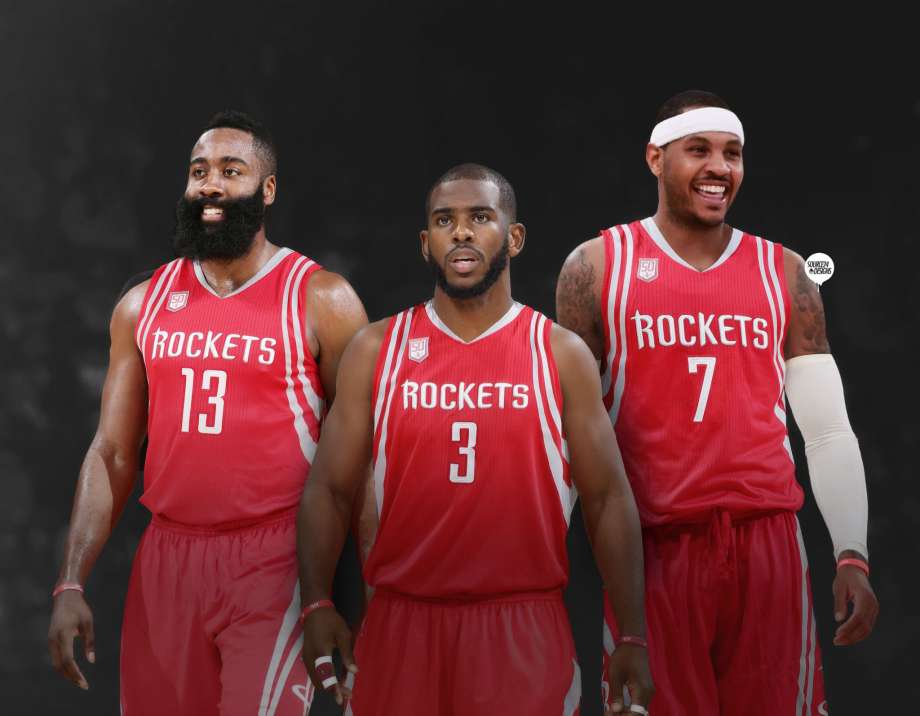