The Oklahoma City Thunder got some good news going into next week. At a concert especially for him, Paul George announced he will be re-signing with the Thunder for multiple years, spurning the Los Angeles Lakers. The deal was music to the ears of Russell Westbrook as well as the Thunder fans. While that moment was very happy, there was another one that left Thunder fans a little frustrated prior to George's decision. Veteran forward Carmelo Anthony had the option to leave Oklahoma City and be a free agent. With $28 million on the table that he probably was not going to find this offseason, Melo decided to opt in to that last year of his contract. And with that and the return of Andre Roberson, the Thunder return their starting five from last season. The continuity on the lineup is a good thing, but what isn't good is Carmelo Anthony did not really fulfill his role. Plenty were not sure what his role was and how he would fit there when he got to Oklahoma City. Well, after a season of seeing things, it was obvious he was the third option offensively on this team. Carmelo and the crew are about to go at it again next season, but for them to take it to another level, Anthony is going to have to do better work as the third option.

Over the years, third options on talented teams have had to do the little things. One memorable third option is Chris Bosh. He was a talented scorer, but he focused on the little things and did other things like rebounded the basketball and he also sacrificed shots to Dwyane Wade and LeBron James. Carmelo Anthony has never had to sacrifice shots until last season where he did so for Westbrook and George. While he did not complain about sacrificing shots, what Carmelo did not do is find other ways to affect the game besides scoring. Carmelo gave more effort defensively, but in his case, it was just not enough. He has to get on the same page as George, Westbrook and Steven Adams. Too many times there were defensive breakdowns while he was on the court. More than getting on the same page, Melo has to get in position to make more plays, whether it's denying someone the basketball, taking a charge, blocking a shot or rebounding even more than he did last year (which 5.8 rebounds a game is one of his worst seasons rebounding in his career). Offensively, Melo has to be more efficient with the shots he gets. He will have his nights where he gets a ton of shots, but it will not be that way all the time for him. So why not allow Westbrook and George to get him easier shots? And when he does not have shots, he can help move the basketball along with giving Adams some assistance on the offensive boards.

The little things is what Melo is going to have to do if he is the stay in the starting lineup and help the Thunder win games. Another option he actually may want to consider is being a Sixth man for Oklahoma City. Last season, the Thunder got nothing in terms of scoring off their bench. They were at the bottom of the NBA in bench scoring. With Melo going up against second-stringers, it would allow him to be the main focus of the offense while he is on the court, giving him shots and allowing him to zone in on what he does best: get buckets. Of course him being the Sixth man would mean he would lose his starting job to a guy like Jerami Grant. The Thunder signed him this summer to a three-year, $27 million deal and with him in the starting lineup, you get a player that will be good defensively and is active around the rim and on the offensive and defensive boards. Sure, you lose some shooting, but with George and Westbrook, things could work out there with him starting.

Carmelo Anthony has some thinking to do on what he needs to do with Oklahoma City or if he wants to be there or if he wants to accept a buyout (that thought is there now since LeBron James is in Los Angeles). The Thunder could use him but he also has to realize that third options have to do more than score buckets. The little things that mean wins have to happen. We shall see if he understands his role more this year or if we see more of the same in OKC from Melo. 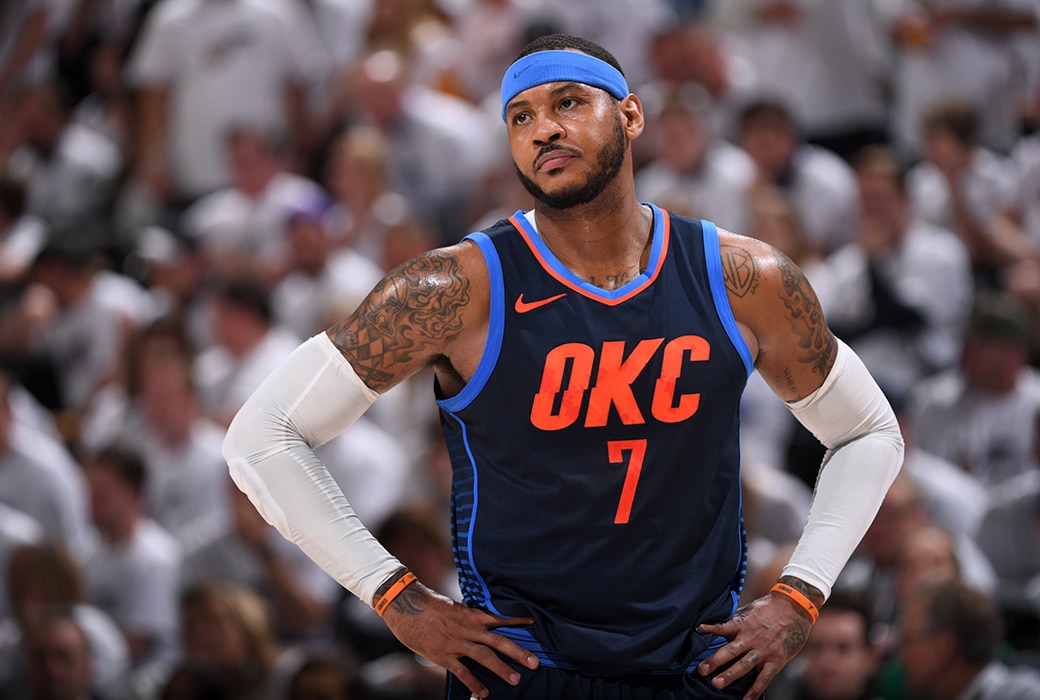