A Messy Situation Between Eric Bledsoe And Phoenix

The NBA is just getting started this year and already there is a team that people are talking about. No, the team isn't the Cleveland Cavaliers or the Golden State Warriors. The team some are talking about is the Phoenix Suns. In a league where some wondered who was the worst team in the NBA, the Suns started out the season trying to lay claim to that title. They have been blown out in their first three games and those loses have been by an average of thirty points a game. To say that they have been absent of defense is an understatement. The Suns have been escorting players to the rim every chance they have gotten and apparently one player has had enough of the culture that is there. Eric Bledsoe, veteran point guard of the Suns, put out a Tweet on Twitter stating the following: "I don't want to be here." Once he put that out there, the prevailing thought is that he was asking out of Phoenix. Well, not too long after that Tweet was put out there, Suns head coach Earl Watson was fired. So if Bledsoe does want out, does he really have a beef?

Back when Bledsoe was a free agent in 2014, he had his choice of places he wanted to sign. Instead of leaving Phoenix though, he signed back with the Suns. At that point, he was probably hoping the team would show some upward progress and eventually become a playoff team. Well instead of becoming a playoff team, this team has progressively gotten worse. Bledsoe, who is now 27 years old, knows that they are going nowhere this season, especially after what the first three games have shown him. The team is even younger and more inexperienced than when he signed to stay there. The leadership seems to be leading the team nowhere fast and he seems to be wasting away there. If I were Bledsoe, I would be ready to go as well. Phoenix has proven that they are following the process the Philadelphia 76ers followed and that is something that he does not want to be a part of. The only mistake he made in communicating the desire to be traded (if that is what his Tweet meant), is he put it out on social media. Now teams know that he wants to be traded and Phoenix will more than likely not get the haul back that they would like.

Bledsoe has every right to want to get out of there, but if I am the Phoenix Suns, I would have a gripe as well. Bledsoe is very talented, but he also is very injury-prone. Going back to the 2014-2015 season, he had one season where he played over 70 games, including one season where he only played 31 games. Injuries are unpredictable, but when you are paying someone to be the star of a team and that player cannot stay healthy, that has to be disappointing. Being that Bledsoe is one of your best players and one of your more experienced ones too, his history of missing games has to be worrisome and it had to be hard to get a look at him and how he was helping progress that team because of that. Along with that, it seems like Bledsoe should be a leader of this team. Well if he is a leader of this team, where has he led them? Not to say that Bledsoe is not a talented player. We all know that he can make some amazing things happen on the court. As far as leadership though, he, along with veteran center Tyson Chandler, just seemingly could not get this young group of players pulling in the right direction and thus the lackluster performance over the last few seasons.

The Phoenix Suns and Eric Bledsoe both share some blame in this situation. The Suns management has mismanaged their evaluations of talent to bring in over the last three seasons. As far as Bledsoe, his inability to stay healthy and his lack of leadership have not helped the situation either. The best scenario for both will be to get rid of Bledsoe even if it means not getting a great package for him. If the Suns want to rebuild, then they may as well go full-tilt on it and stop wasting the time of Bledsoe along with Tyson Chandler. 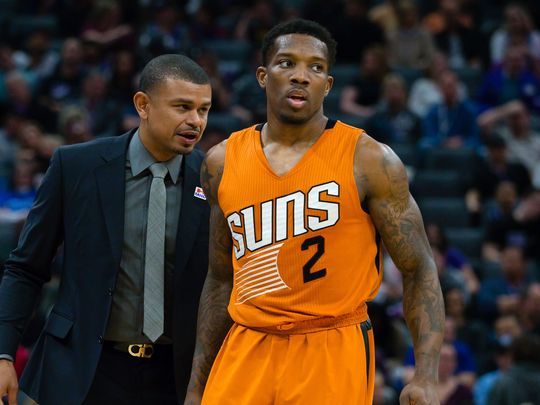