There Is Truly Strength In Numbers

When the NBA Finals began, all the talk was about the stars of each team. Golden State had the Steph Curry, Klay Thompson and to a lesser extent, Draymond Green. And as for the Cleveland, they had LeBron James, Kyrie Irving and to a lesser extent Kevin Love. Plenty hyped up the return of Love and Irving to help the Cavs win this series and thought that it would help the Cavs have a chance to win this series. And while some were thinking about the Cavs and what they had, there were others that were thinking of the duo the Warriors could throw out there. Thompson and Curry, known as the Splash Brothers, were expected by many to light up the Cavaliers. But surprisingly to everyone, they both have not gone off in this series toghether yet. In fact, neither has scored over 20 points in this series. That would spell doom for other teams in the NBA. But other teams don't have the same personnel the Warriors have. They have taken the first two games of the series from the Cavaliers without the bigtime presence of Steph and Klay. But who has been stepping up to make it happen? It has been the bench and one of the less heraled stars of Golden State.

The bench of the Golden State Warriors were having issues last series. They were matched by the Oklahoma City bench when they got down three games to one versus the Thunder. But from that point forward, the bench of the Warriors has been present and effective. In this series, the bench has been dominant for the Warriors. In Game 1, they outscored the Cavaliers bench 45-10, led by backup point guard Shuan Livingston. And in Game 2, the Warriors bench once again had the advantage, outscoring the Cavaliers bench 40-30 and being led by Leandro Barbosa this game around. They are outscoring the bench of the Cavs easily, but they are also coming in and staying within their roles. For example, when Andre Iguodala comes in, the Warriors have been able to use him to be defacto point guard when he is on the floor with Steph Curry and Klay Thompson. All the guys know their role when they come in and play it to perfection. And with the defensive miscues of the Cavaliers, the Warriors have made Cleveland pay time and time again.

But along with the Warriors bench, the less heralded of their three stars has stepped up and played well. Draymond Green had his struggles in the last series as well like the bench did. But he came out of his funk a little towards the end of the series as they advanced to the NBA Finals. In the NBA Finals last season, he had struggled against the Cavaliers in the first three games, averaging a little under ten points per game. After that and the smaller lineup the Warriors went with, his scoring picked up and they went on to win the title. But in this season's NBA Finals, Green has had no such struggles. He is shooting 51.6% from the field, including 50% from three-point range. And he is averaging 22 points per game in this series after his 28 point outburst in Game 2. It seems the matchup he has with Kevin Love is easily in his favor. And he has taken advantage of the switching that Cleveland has done every single time. At this rate, he is scoring more than Curry and Thompson this series and having more of an effect on both ends of the court.

The Warriors are in supreme control of this series right now and the Cavaliers are reeling. But the domination of the Warriors doesn't have much to do with Klay Thompson and Steph Curry. It has everything to do with their bench and their third star, Draymond Green. Now they head to Cleveland for Game 3. And if their bench and Green show up like they have so far, then it could be an ugly scene for the Cavaliers back home in Cleveland. So much for the series being better for them this year around with Kevin Love and Kyrie Irving fully healthy to help Cleveland. Seems like the Warriors aren't the same team they were last year either. They are better. 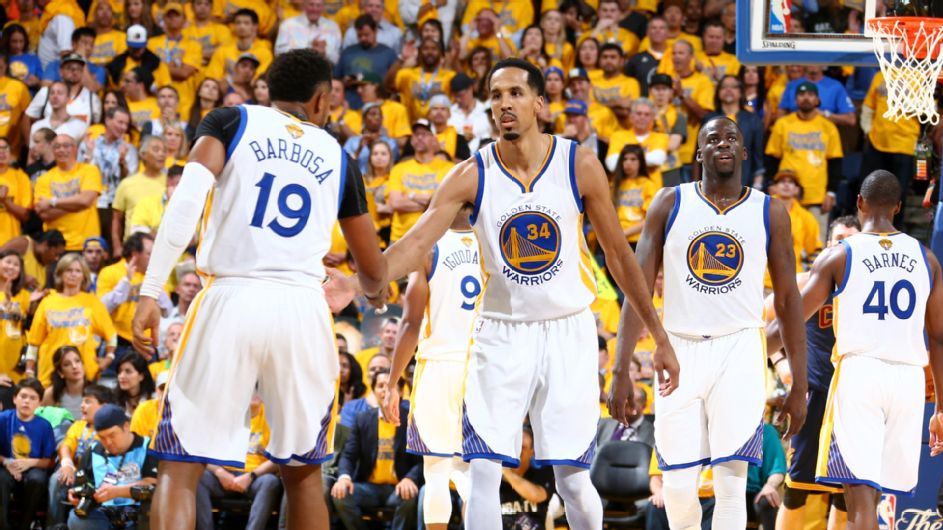