The Warriors Lose Andrew Bogut For The Rest Of The Series

The Golden State Warriors entered Game 5 with a chance to close out the Cleveland Cavaliers. They had the momentum all on their side as they headed home. And despite the suspension of forward Draymond Green, the Warriors were still favored to win. But not only did they lose the game, they lost a starter to injury as well. In the third quarter, JR Smith attacked the basket and got his shot blocked by Golden State center Andrew Bogut. The veteran center got every piece of that basketball while helping protect the rim. But unfortunately, he also got his knee caught up under JR Smith when he fell to the ground. The result was an bruising and swelling to his knee. And an MRI confirmed that he will be out for the rest of the series. The veteran center has not been playing big minutes for the Warriors. In fact, he was often seen down the stretch of games sitting on the bench while Golden State goes small. But no matter how small a role some may think he plays, he is an important piece to this team that they will miss.

Offensively, Bogut is not a great finisher. In fact, over his time in the NBA and after suffering multiple injuries, the former number one overall pick has struggled to find any consistency scoring at all. He may not be the guy that can finish inside consistently, but he sure can add the intangibles on the offensive end. Everyone always sees Steph Curry and Klay Thompson hitting wide-open shots off screens. But no one pays attention to the guy that is setting the screens for them. Draymond Green is one guy that sets screens to free Steph and Klay, but Bogut has become known for doing so. Often times, you can hear opponents complain about the screens he sets, saying he is moving on them. But whether he is moving or not, you cannot deny what he is able to do for Steph Curry and Klay Thompson with his screens. But this is not the only intangible he has on the offensive end of the court.

The Golden State Warriors are a team that is at the top in assists per game. They move the ball so beautifully around the court and that along with their cuts and movement make them one of the best offenses in the NBA. Bogut fits this offense so well because of his ability to see the court. Most centers in the NBA don't have vision that allows them to see a guy open off a cut and actually get him the ball in position to score. Bogut has that type of ability and he shows it when given the opportunity, as he can be seen hitting Klay Thompson, Harrison Barnes or Draymond Green when they make random cuts in the offense. And also when he sets on-ball screens, he can be trusted to receive the pass while rolling and make the correct decision. And that correct decision often leads to a hockey assist or an actual basket for the Warriors most of the time.

But along with his presence offensively, he is definitely going to be missed on the defensive end. We all know that he is not their best defender out there. In fact, Klay Thompson, Andre Iguodala and Draymond Green are the guys that are looked at to set the tone there. But Bogut is still a very solid defender. He can defend his position very well, frustrating opposing big men with his gritty defense and getting under their skin with his edgy play. But he also contributes defensively by being able to block shots at the rim. Draymond Green is Golden State's best shot-blocker. But when Bogut is really playing well, Bogut can have a block party, as evident in Game 2 of the NBA Finals. He is not exactly the quarterback of their defense, but his role is definitely important because of the cleanup he provides at the rim and his positioning defensively.

Bogut, despite playing a smaller role, will be missed. Now the Warriors could combat his absence one of two ways. They could start Andre Iguodala and go small, with Draymond Green starting at the center position. That would put them at a huge disadvantage on the boards but would make then a quick team that is hard to defend. The other option to start for Bogut is Festus Ezeli. The young backup center gives them size to replace Bogut, but he is not the defender, passer and screener that Bogut is for the Warriors offensively. Ultimately, the small ball approach will more than likely help the Warriors the most versus Cleveland in Game 6. And if the Warriors don't start with small ball, they will certainly end up with that sort of lineup on the floor at one point or another. Bogut may not have given the Warriors a ton of minutes, but he is a player that many will not understand until they see the Warriors without him. 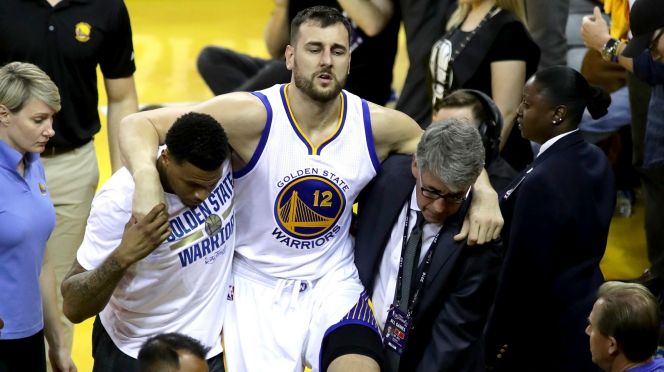