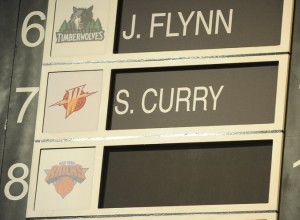 Steph Curry is on top of the basketball world right now. He led his team to a title in the 2014-2015 season and this year they are looking to make history. But back in 2009, he was not the main attraction going into the NBA Draft. In fact, forward Blake Griffin was the undisputed number one pick in the draft. At that time when it came to Steph, there were some questions about him. Some wondered if he was a factor of the level of competition he played against. After all, he did play against guys that could only dream of playing in the NBA in the conference Davidson College was in. Others wondered about him being able to play the point guard position. Curry shot the ball well, but he was not big enough to play the shooting guard position and many wondered if he would be able to play point guard in the NBA. Those questions about Curry ended up pushing him to the 7th pick in the NBA Draft that year. And as they say, the rest is history. Curry is easily the most accomplished player that came out of the 2009 Draft. But what can be said about the other guys that were picked ahead of him? Let’s take a look at the first six picks of the 2009 NBA Draft. 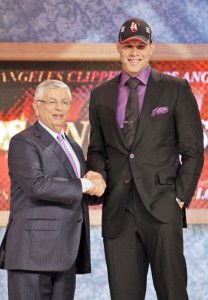 Blake Griffin was looked at as a franchise-changing big man at that time coming out of the University of Oklahoma. And for the most part, he has had a hand in changing the fortunes of the Clippers. The team before him had not done very much winning. But since he has been there, they have made the playoffs consistently since the 2001-2012 season. But after a while, making the playoffs just is not enough. The Clippers still have not made a conference finals appearance and after last year’s debacle in the Western Conference Finals versus the Houston Rockets (surrendered a 3-1 lead to the Houston Rockets and lost the series), there are many that think they never will. Blake has played a huge part in making the Clippers a consistent winner and has averaged a double-double for his career (24 points and 10 rebounds a game). But he also has played a hand in them not winning anything of consequence once in the playoffs. 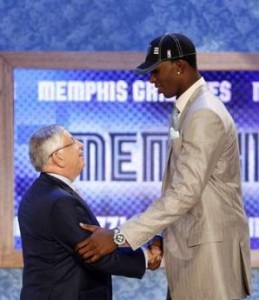 Everyone was speaking of Thabeet when he entered the NBA Draft. He was a 7’3” big man that many thought would be a huge force in the NBA on the defensive side of the ball. The Grizzlies, then needing a big man, took a chance on him and thought he would be a cornerstone for their franchise. Well, Thabeet never really panned out as much as the Grizzlies thought he would. He became the highest drafted player to be sent to the NBA’s D-League after not being able to get playing time for the Grizzlies his rookie season. After a year and a half with the Grizzlies, they traded his services to the Houston Rockets to get the services of forward Shane Battier. Thabeet would go on to be traded to the Portland Trailblazers (2012), signed by the Oklahoma City Thunder in the summer of 2012 (played there for two seasons) and was traded to the Philadelphia 76ers in 2014, where he was cut almost immediately. His career never met the hype that came along with him, as he never averaged more than 3.1 points per game and 3.6 rebounds a game (which those were his averages his rookie year in Memphis). The Grizzlies definitely made the wrong pick in Thabeet, who is not even anywhere near the NBA now. 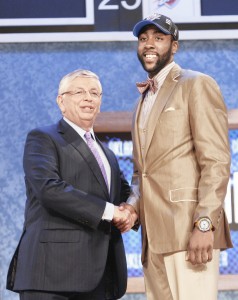 Harden was the team when he was at Arizona State. He facilitated their offense and he did pretty much all the scoring. When the Thunder drafted him third overall, they pulled off the best three-year run of 1st round draft picks in recent NBA Draft history (Kevin Durant in 2007 and Russell Westbrook in 2008). When they added Harden to the team, that gave them someone they could bring off their bench and give them some punch. He also played their de facto backup point guard as well, allowing Westbrook to move off the ball and be a scorer. But his time in Oklahoma City ended right before the 2012-2013 season was about to start. Harden had just helped the Oklahoma City Thunder make the NBA Finals the previous year and he also won the NBA’s Sixth Man Award as well. He and forward Serge Ibaka were both pending free agents in the summer of 2013 and the Thunder had to make a choice. Were they going to pay Harden or Ibaka? Well, Harden wanted to be paid a max-player contract and the Thunder were not equipped to do so (already were paying Westbrook and Durant max contracts), so the Thunder had to make a tough decision. They signed Ibaka to a long-term deal and dealt Harden, along with guard Daequan Cook, center Cole Aldrich, and forward Lazar Hayward to the Houston Rockets for guards Kevin Martin and Jeremy Lamb, two first-round picks and a second-round pick. The move allowed Harden to grow into the best offensive shooting guard in the NBA. And although he has made one conference finals appearance (they lost to the Golden State Warriors in the 2015 Western Conference Finals). Other than that breakthrough for Harden and Houston in the playoffs, the Rockets have been a team that has lost in the first round every year Harden has been there. And looking at this season, it looks like that team is falling apart and may not make the playoffs. Harden may be one of the best shooting guards in the game, but he is not leading the Rockets anywhere, especially with his atrocious defense. 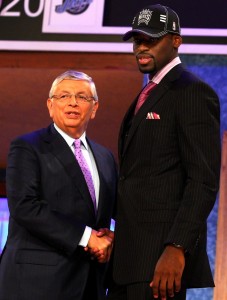 Tyreke Evans was a tremendously talented player at the University of Memphis. After coach John Calipari moved him to point guard, Memphis seemed to really take off. And with the Kings taking him, they expected him to continue to grow as he had in college. But unfortunately, the situation between he and the Kings just did not work out. He averaged 20.1 points his rookie season and was named the 2010 Rookie of the Year. But that was the highest he would average for the Kings in his time there. Sacramento never could decide what position they would play him in. They tried him at point guard, shooting guard and small forward and it seemed to just make Evans less effective overall. In the offseason of 2014, Evans was allowed to check out the free agent market. The thinking from the Kings was that he was a restricted free agent and they could match any offer he was going to receive. The Kings were not expecting the offer he got from the New Orleans Hornets (now New Orleans Pelicans) of four years and $40 million. The Kings decided not to match the offer and he became a teammate to Anthony Davis in New Orleans. So far, he has not been healthy the entire time in New Orleans. He has been solid when playing for them though. 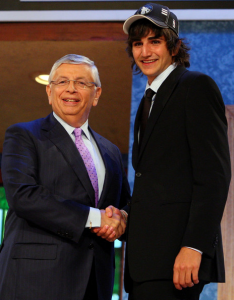 At this point in time, we had been hearing so much about Rubio. He was a wizard with the basketball by all accounts and he was going to come into the NBA and tear it apart. The Timberwolves bought the hype and took him with the fifth pick in the draft. They wanted to pair him up with forward Kevin Love and make things easier for their team. Well, things have not exactly worked out with Rubio in Minnesota. First, he did not arrive in Minnesota until the 2011-2012 season because he could not get out of his contract overseas. That stunted his growth in the NBA. But once he got here, the pass-first point guard immediately showed his acumen for dishing the basketball, averaging 8.2 points per game his rookie season. It was noticeable that he could not shoot the basketball, but it was thought that his shot would improve over time. Well, it has not improved the way some thought it might and the result is teams sagging off him and helping off him in games. That causes the offense to be harder for the Timberwolves sometimes. Although Rubio has not lived up to the hype he had coming into the NBA, he has not been the entire reason the Timberwolves have not been successful since he was drafted. The organization just can never seem to put it together and get back in the playoffs. And it also seems that not many want to be there in the first place. They have some young talent on the team currently right now with big man Karl-Anthony Towns and wings Andrew Wiggins and Zach Levine. But they made the mistake and signed Rubio to a four-year, $56 million extension to stick around with this team. He has yet to average more than 11 points per game and he still cannot make teams honor his jump shot. When the Timberwolves are in halfcourt, he does not help them score easier because teams play them four-on-five. And he does not exactly defend his position well either, which further hurts the Timberwolves. 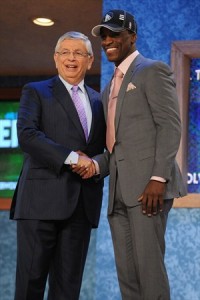 The Timberwolves traded up to get the 5th pick and draft Rubio. You would have thought they were done drafting point guards. Well, the Timberwolves were destined to prove us all wrong. They saw Flynn in college and saw the effort he played with along with the shooting and leadership. And they could not help themselves at all. Flynn was good in college at Syracuse and it was thought he would be a solid pro. That proved not to happen at all. As a rookie, it seemed like his career was going to be solid. He averaged 13.5 points and 4.4 assists. But the following year, he had an eight-point drop in his average and he averaged an assist less as well while returning from offseason hip surgery. All this was happening while he was not the starting point guard like in the previous season. And Flynn also had an issue with turnovers as well, not even averaging a two-to-one assist-to-turnover ratio. At that point, Minnesota lost faith in him. And during the time of the 2011 NBA Draft, the Timberwolves decided to trade him along with big man Donatas Motiejunas to Houston for the services of center Brad Miller, the 23rd and 38th picks in the 2011 Draft and a future first-round pick. Flynn did not make it long with the Rockets, as he was traded along with Hasheem Thabeet and a future second-round pick to Portland for veteran big man Marcus Camby in March 2012.. Flynn played 18 games for Portland in 2012 and that was the last time he would ever be in the NBA. He tried out for the Indiana Pacers, Detroit Pistons and Los Angeles Clippers before heading overseas to try and play, with no great results. And now his name is never really uttered in NBA circles unless they are talking about busts in the NBA.

To give you a quick rundown, Curry had two guys not in the NBA currently selected ahead of him. He also had two point guards selected ahead of him that were nowhere near as good as he was. If they had to do it all over knowing what they know now, the Timberwolves would have probably never drafted Rubio and Flynn over Curry. And as far as the Grizzlies, they would have definitely selected Harden over Thabeet. But what cannot be overstated is the confidence the Warriors had in making that pick and selecting Curry to be a part of their team. And with his selection, the building of the Warriors into a championship team began.