The Perfect Dream For A Cubs Fan Like Me

Summertime in Nashville, Tennessee. Those were the times that I would sit around my house and watch television. And during that time, that is when I would discover baseball. I would often find myself watching things like tennis, ESPN and reruns of old 80's shows, but then I would wander to WGN to watch a team that I just could not turn my head away from. That's where I would watch my favorite player, second baseman Ryne Sandberg, slug out homeruns and play Gold Glove defense in the infield. And while watching him, you saw guys like Mark Grace, Andre Dawson, Greg Maddux and Shawon Dunston grace the blue pinstriped uniforms with the blue cap with the C on it. And although the Cubs were not winning, the joy that some of the players had trying to help the Cubs win was amazing to watch. So at that point in my young life, I became a Cubs fan. And although they were not winning, I always held out hope that it would happen one day.

Over time, the Cubs have had some bad seasons. There have been some 100 loss seasons that have made me even wonder if this team would ever become a World Series champion. And then there was 2003, when the Cubs looked to be ready to cruise into the World Series and the Bartman incident happened and the Cubs would lose their focus versus the Florida Marlins in Game 6. Chicago would go on to lose the National League Championship Series. And from there, the Cubs would go back in their hole and give me a ton of disappointment.  But I am not  the only fan that has experienced this type of hurt. There were millions of fans that were there in the same hole with me, looking at a team that was without a World Series win since 1908.  At some points in time, I wondered why I would even be a Cubs fan. Was it that I was used to seeing them try and fail and had become a brainwashed Cub fan used to being called the Loveable Losers? Or was it that I still had that flicker of hope left inside of me that one day the Cubs would win a World Series? Well, whatever it was inside of me, I just could not give up on the team I rooted for. Through all the loses, I still wore my jerseys, shirts and hats proudly even though fans of other successful teams looked at me like I was a loser and enjoyed inflicting pain on myself by believing the Cubs could win it. Each season I would get so frustrated, but I would believe that one day I would get to see them win big.

I honestly thought that day was last year when the Cubs were playing great and had again made it to the National League Championship Series. But again, the pressure of the moment got the Cubs, as the Mets shut their powerful lineup down. But this year, the feeling that this team gave off was one that would not be denied. At the beginning of the season, the Cubs were picked to win the title. And when that happened, I probably became one of the most worried Cubs fans. Plenty times the Cubs have not met my expectations, especially when they were picked to win something. But there was something different about this team. They knew the expectation and played up to them. The Cubs ended the season with the best record in baseball and plenty Cubs fans like me felt this was our time. But our time would not come without any bumps in the road. The Dodgers series was a little stressful because the bats went silent. But the Cubs fought through and made it. And against the Cleveland Indians in the World Series, the bats would go silent as well at times, helping the team fall to a 3-1 deficit. The team would fight back from that deficit and tie the series. Heck, when the Cubs lost the lead in the bottom of the eight courtesy a Rajai Davis two-run homerun, serious doubts began to creep back in my and some other Cubs fans as well. Would our past become our reality again? This Cubs team said no. And in extra innings, this Cubs team did what they usually do and fought back.

Kyle Schwarber would lead off the tenth inning after a short rain delay with a single (replaced by Albert Almora Jr.). And after a sacrifice fly to move up Almora Jr. to second base, the Indians intentionally walked Anthony Rizzo instead of giving him a chance to knock in Almora Jr., putting the pressure on Ben Zobrist to get it done. And with the clutch moment arriving, Zobrist came through, doubling down the left field line and driving in Almora Jr. Miguel Montero would follow with a single to drive in Rizzo and the Cubs went from the bring of despair on giving up the lead to back in the driver's seat again. All the while, I am sitting in my house a nervous wreck. Could it be that the team I never saw win anything finally became winners? In the top of the tenth, they tried to give me another scare. Rajai Davis struck again and knocked in a run after the Indians got someone on base. But the Cubs were able to come through, forcing a grounder to Kris Bryant, who through a perfect strike to Rizzo at first base. And then the celebration was on.

The Cubs rushed the field, joy in their faces. And while they were celebrating in Cleveland, I was running around my living room losing my mind. Of course I could not yell like I wanted to because my family was asleep. But I was definitely extremely emotional about the win. Hearing about the 108 years of winless teams all during that time of us losing was over. And now I could tout my Cubs as World Series champions. The moment I was never sure I would see with my own two eyes happened. And just like that, those moments of me watching the Cubs lose over 100 games when I was a kid felt worth it. I was there through all the struggles. I was there through all the disappointments. And now I can say that I am a fan of the World Series-winning Chicago Cubs.

The only bad thing about this is those that have gone on before the championship season: Ron Santo, Ernie Banks and most of all, Harry Caray. I'm sure Ron Santo is still playing the hot corner in heaven while Ernie Banks is waiting two play two games and Harry Caray is yelling "Holy Cow". Truly an exciting experience and one that I will never forget. The Luvable Losers, as many in baseball have called them, have become the Wonderful Winners. 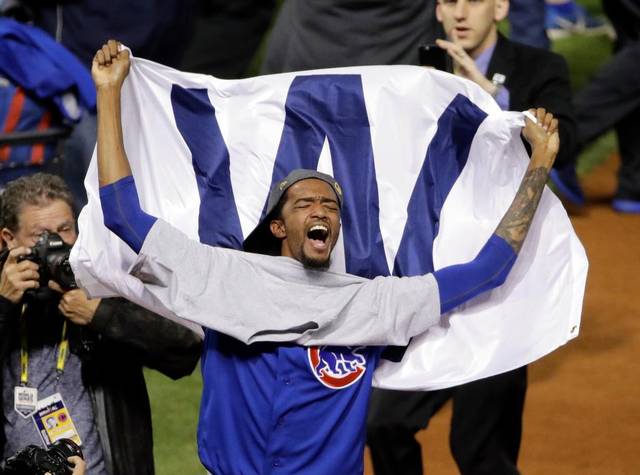