Bryce Harper will never live up to his new contract

The Bryce Harper sweepstakes went into overtime this baseball offseason. While teams were going into spring training, Harper was still waiting on a deal to get done. There were plenty of teams that were interested in his services, including the team he played for last season, the Washington Nationals. The big thing Harper  and his agent Scott Boras wanted was a contract over $300 and with as many years as he could get. Well, Harper may have waited a long time, but the contract talk can be laid to rest because of the Philadelphia Phillies. Harper and the Phillies agreed to a 13 year, $330 million deal, complete with a no-trade clause. The deal instantly becomes the largest deal in Major League Baseball history. Along with these riches come expectations though. And that is why Bryce Harper will never live up to this contract.

When a player signs for this type of money, expectations rise. Fans are going to expect 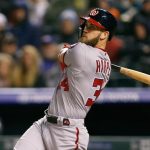 Harper to make every big hit, hit a ton of homeruns, throw people out from in the outfield and generally be the best baseball player in Major League Baseball. While he may try his best, Harper isn't Mike Trout, who is the best position player in baseball. Harper will make some plays offensively, but he will be inconsistent in how he comes through. Last season, he hit .249 with 34 homeruns and 100 RBIs. His hitting was subpar, but the homeruns were good. Unfortunately, the numbers he put up last year would still end up having fans thinking he was not doing enough. And as a result, there will be people wondering about the deal instantly. Even if he were to have some career numbers next season in Philly, which is a hitters ballpark, there will still be someone question his contract. 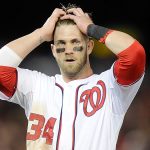 How the newly-paid Harper responds to the new pressure he has will be something to watch. The Phillies played well last season and were a young team on the rise. He is expected to be the superstar to take them over the top. The biggest thing he has to do is just play his game and not press or do things out of the ordinary. If he starts trying to live up to his contract and do extraordinary things, then he will end up slumping and the pressure on him will get even worse. At that point, the game will become even more mental than it already is and that isn't a good thing.

No matter what Harper does though, just remember he will never live up to the contract he just got when it comes to those who watch the game. The Phillies offered him the money and you're always worth what a team wants to pay you, but there will never really be a justification of this deal, especially with no opt-out clauses during the entire thirteen years of the deal. The only way he leaves Philly at this point is if he heads to the Yankees or the Red Sox and that would only happen if he decides he wants to be traded after some time in Philly.