The Lasting Impact Of Pat Summitt

Legends are made over time. There have been many legends in basketball that have graced us with their presence. In the NBA, there are living legends like Michael Jordan, Magic Johnson, Larry Bird, Oscar Robertson and yes Bill Russell. And in college basketball, there were legends like the Wizard of Westwood, John Wooden, and North Carolina's Dean Smith. Currently on the women's side of college basketball, there is one name that dominates most of the headlines. His name is Geno Auriemma and he is the head coach of the University of Connecticut Huskies. Right now, they are dominating women's basketball. running off championship after championship during their reign of terror over the game. But with his emergence, many seem to have not remembered that there was another coach that was before him in setting up this dominating path. Her name was Pat Summitt. On early Tuesday morning, the former University of Tennessee coach lost her battle with early onset dementia at the age of 64. And with that, one of the greatest coaches of all-time has passed away. But even though she has passed away, her spirit will live on.

The funniest thing about Pat Summitt is she actually was not the first choice to be the head coach at the University of Tennessee when she arrived. She was hired as a graduate assistant for the Lady Vols back before the 1974-1975 season when the coach abruptly quit and she was then named head coach. Who would have known that someone that was viewed as a stand in would become one of the greatest coaches of all-time. She started off coaching the team and was also the bus driver. She got paid only $250 a month and was also in charge of washing the team's uniforms after the games. Meager beginnings for a woman that many still look at as the best to ever coach in college basketball. The money got better over time for Summitt, but so did the appreciation she received. Summitt began to build a program that would be highly competitive year end and year out. And with that, she built a program that dominated the college basketball for a long stretch of time. As she coached year after year, she began to raise the bar more and more for the women's game. Other coaches and programs began to pay attention to the success that Summitt was having and what she was doing to obtain it. Eventually, everyone caught up to Pat, but not before she won eight championships. Connecticut would eventually overtake Summitt and the Lady Vols as the top program in the country. But if there was no bar to reach for the Huskies, then they could have possibly never reached the heights to where they are.

Not only will Summitt live on through what all she did to elevate the game, but through the players that she coached. If you listen to many of the players and their words in regards to Summitt, almost none of them have mentioned anything about her being a coach. One of her former star players, Chamique Holdsclaw, spoke of how Summitt put the importance on getting her degree when recruiting her to come play at Tennessee. And other former players like Candace Parker spoke of her not as a coach but a role model. The truth of the matter is that she was more than just a coach. She wanted the best for her players not only on the court but off of it too. And with that, she made sure that every player that finished their eligibility at the University of Tennessee got their degree. And with the way she attacked and lived her life, she inspired some so much that they even became coaches themselves. Her spirit will live on vicariously through the players she touched and inspired along with the people that she touched throughout her coaching career.

Pat Summitt may be gone, but she will never be forgotten. There will never be another one of her and women's basketball would not be what it is now if she had never been given the opportunity she was given back in the 1974-1975 season. Geno Auriemma and the University of Connecticut, Baylor and Brittney Griner and other special teams, coaches and players in the women's game would never have been heard of if Summitt had not raised the bar and became the torch bearer for women's college basketball. And for that, she was more than just a coach, mentor, mother and friend. She was a pioneer. And that is something that will never be taken away from her even in death. Rest In Peace Pat. You lived a great life. 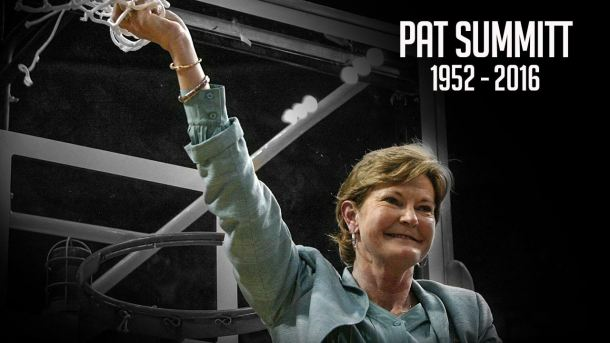