Candace Parker A Glaring Omission From The Women’s Olympic Team

The Summer Olympics are right around the corner. And like usual, there are selections made for the teams that go. The selections that seem to get the most attention are the people that make the men’s and women’s basketball teams. The men’s team is yet to be determined, as there are some that are pulling out of the Olympics and they still have camp to go through. But the women’s team was recently announced. Guard Sue Bird, forward Tamika Catchings and guard Diana Taurasi are the captains of this team and are going for their fourth gold medals. Forward Seimone Augustus and center Sylvia Fowles return trying to get their third gold medal. Center Tina Charles, forward Angel McCoughtry, forward Maya Moore and guard Lindsay Whalen return trying to get their second gold medals. Along with the veterans of Olympic play, guard/forward Elena Delle Donne, center Brittney Griner and forward Breana Stewart will get to have their first Olympic experience. The collection of talent is one that is unmatched across the world. And unless something unexpected happens, they will raise the American flag as they win the gold medal in Rio De Janierio, Brazil. But there is one noticeable absence on this team.

Candace Parker is one of the most dominant basketball players in the WNBA. She averaged roughly 19.4 points and 10.1 rebounds this past season, although she only played in 16 games for the Los Angeles Sparks due to rest for the first half of the season. She came back just in time for them because she took them from one of the worst teams at 3-15 to a fourth seed in the playoffs with a record of 14-20. And she was a stat-sheet stuffer, leading her team in rebounding and assists while scoring 18 points per game. Parker is a positionless player. So she could have essentially played any position while leaving someone off. But instead of bringing her back to allow her to potentially go out with her third gold medal in a row, she is now sitting at home. The team instead decided to go with Stewart, who was the National Player of the Year, four-time NCAA Champion and 1st overall pick in the WNBA Draft this year. Her list of accomplishments is great and she definitely deserves her spot on the team. She may not be the fastest player on the team, but she can do some of everything and is deadly from three-point range. Other than take her off, there is a one player that could have been left off in order to have Parker on the team.

Point guard Lindsay Whalen has is special with the basketball. And when she is on the court with Moore and Augustus, her professional teammates, the magic is definitely flowing. But when matching up her against Parker, then Parker would be the obvious choice. Some bring up that Whalen is a point guard and they need another one, but they have at least three players that can play the point guard spot on this team without Whalen (Sue Bird, Diana Taurasi and Maya Moore). Parker would be another addition that could initiate the offense, but she could also fill in at other positions on this team. With her addition, the USA women’s basketball team would be extremely versatile and could essentially put out lineups of players all taller than six foot tall if they wanted to. And if some are worried about Parker and her shooting in comparison to Whalen, then there is not much difference at all. Parker is a career 32% three-point shooter compared to Whalen’s career percentage of 28%. The choice is pretty obvious there.

The omission of Parker on this team is definitely glaring. And there will more than likely be many follow up questions in regards to why she did not make the team. Assuming that she wanted to be on the team, there should have been some way to make it work. Olympic team head coach (and current University of Connecticut women's head coach) Geno Auriemma will no doubt get some criticism being that he has five of his former players on the team and a former UCONN commitment in Della Donne. But even in reviewing the team and trying to select who could replace her, it does not take away that one of the best women’s basketball players out there is sitting this one out and not because she wants to either. 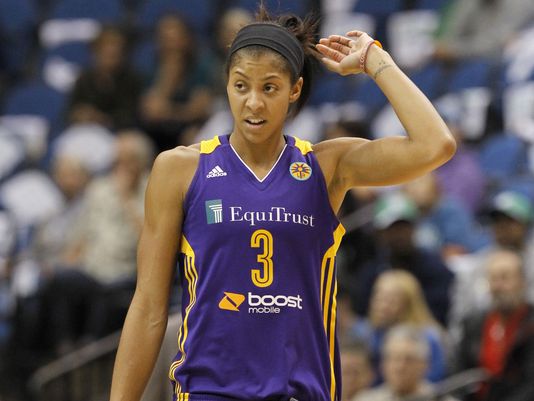