The Win Streak Goes On For The Belmont Women

The Belmont women took on Morehead State in a battle of one versus two in the Ohio Valley Conference. And as they have done all season, the Lady Bruins were locked in and ready as they won going away 96-76.

The Lady Eagles, who were playing without their leading scorer, guard Brianna McQueen, were obviously adjusting early without here. And in the first quarter, the Bruins took advantage of them on that end of the floor, holding the Eagles to four points within the first four minutes. Belmont offensively opened the game on fire, as they hit five three-pointers in the opening quarter, including two from point guard sophomore Darby Maggard.  As a result of the early struggles, the Lady Eagles were down 27-13 after the first.

In the second quarter, the Lady Bruins continued their impressive play behind the combination of senior forwards Lauren Thompson and Kylee Smith. Thompson was attacking the Lady Eagles inside with her wide array of skills while Smith was 3/6 from the three-point line. Both women had 14 points in the first half apiece. For the Lady Eagles, they continued to fight but just could not get anything going. "The first half was just a no-contest. They came out hot and just beat us in about every area of the game, "said Morehead State head coach Greg Todd. The Lady Bruins would go in to halftime with a 54-32 lead after going 9/17 (52.9%) from the three-point line and shooting 55.6% overall in the first half. The 54 points for Belmont was a season-high for points in a half and Maggard racked up eleven assists with no turnovers in the first half.

As the second half started, the Lady Bruins picked up right where they left off, scoring another 27 points in a quarter. This time it was Sally McCabe's turn to carry the offense. The junior scored seven points in the third quarter, including her second three of the game, as the Lady Bruins continued to keep the tempo and the pressure on Morehead State. The Eagles continued to fight in the third quarter, getting scoring from guard Darianne Seward and forward Shay Steele as Morehead State tried to fight to get back in the game.

But in the end, the Lady Bruins were just too much, as they finished the game scoring 96 points. The Lady Eagles, for their part, did continue to fight and that was something coach Todd talked about: "We would have liked to have played better, but we were pleased we were able to outscore them in the second half."

The Lady Bruins were led in scoring by McCabe with 18 points along with 10 rebounds, followed by Thompson and Jenny Roy with 16 points apiece and Kylee Smith with 14 points. The Lady Eagles were led by Darianne Seward with 25 points, Aaliyah Wells with 15 points and Shay Steele with 14 points. The Lady Bruins improved to 22-5 including 15-0 in the Ohio Valley Conference. The Lady Eagles fell to 19-8 and 9-5 in the conference with the loss.

When talking about the lead and how they continued to stay focused, Sally McCabe had this to say: "We don't like to let up on the gas pedal. We just want to keep going and keep playing hard and that is definitely what we did."

Coach Cameron Newbauer was definitely happy with the outcome for his team. "We have the second-longest winning streak in the country right now." But even in that and know that they have the regular season conference title all wrapped up, he knows that his kids want more: "We are just at a point where some people are asking what are we playing for at this point since we have already clinched conference. But our kids just want to get better and they have a strong desire to keep competing and keep getting better." As far as the talk about the undefeated record in the OVC, Newbauer takes the focus to another place. "We never talk about goals. We just talk about one day at a time, staying focused with the best attitude and effort. We try to let go of the outcomes and results and control what we can and that is what effort and what attitude we bring."

The Lady Bruins have one more game left in conference versus Tennessee State on next Saturday, February 25th. As for the Lady Eagles, they take on Tennessee Tech on Monday night. 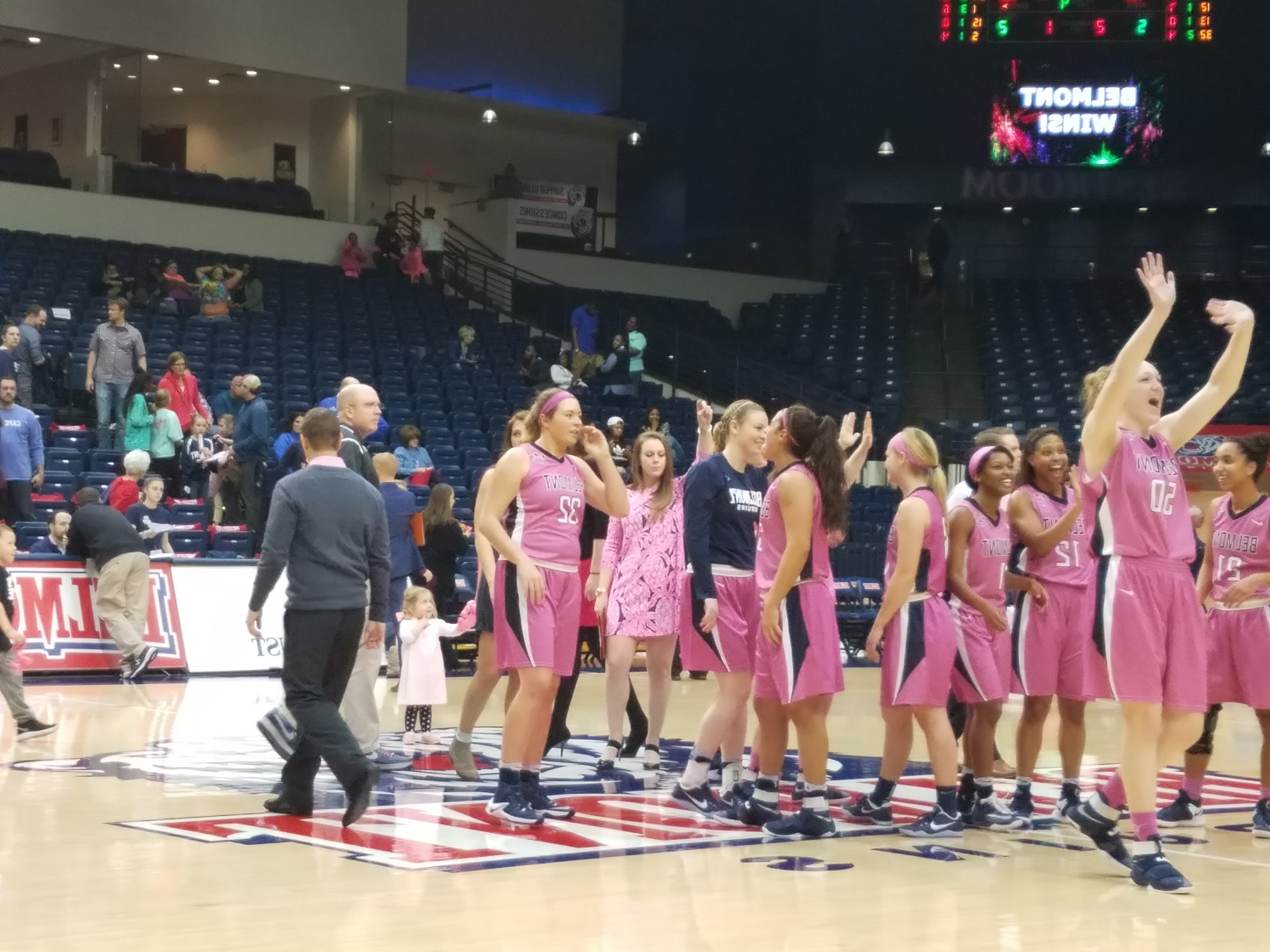 (Belmont women waiting to the crowd after the game)