Rick "Wild Thing" Vaughn was only one of the characters in this movie about a baseball team that was put together with the intention of being so bad the owner could move the team out of Cleveland. But unfortunately, the team overcame the bad start and the discord in their locker room to become closer than what they were. (Warning! Some language used in this clip)

This moment here was awesome to watch and it was just one of the moments this movie had. Very enjoyable.

Many of us all can talk about Rocky until we are blew in the face. The fight scenes, Rocky (Sylvester Stallone) yelling for Adrian in the ring and the battles he had in the ring over the series of movies that were to follow this original. But without the original Rocky, there would be none of the others. And in this one, it was not just about the boxing, but about the fight to become something he had as well:

Rocky was the guy that stood for the everyday man and no matter how hard Apollo Creed (Carl Weathers) came at him, he continued to fight and take shots. Another underdog story.

Who loves an underdog story? I know that plenty do. This one has Rudy Ruettiger (Sean Austin) as an undersized kid who has dreams of playing for Notre Dame. And as he starts his journey, he goes through all kinds of lengths to get there, even working at the stadium. Here is a scene from the movie:

The jubilation of all he built up to all exhibited in one play. Got to love the underdog.

Coach Norman Dale(Gene Hackman) heads to Hickory high school in Indiana to take over a program looking for success. And within that, he has a strict way of running things. Some love it, some hate it, but eventually all get that he plays no games. And once he is able to get the best basketball player in the school, Jimmy Chitwood (Maris Valainis), to play for him. Once that happens, magic happens too.

This basketball movie is one that is a true story of an underdog. They were never supposed to get to where they did and they banded together to do something special.

Pro sports is not just what happens on the field, but what happens when all the players are off it and in the locker room as well. Quarterback Jack Rooney (Dennis Quaid) is injured and replaced by hotshot Willie Beamen (Jamie Foxx). The movie follows this team as they go through their ups and downs, led by head coach Tony D'Amato (Al Pacino) and how players get used to the new style of the team led by Beamen. Truly great action in this movie like this right here:

The movie has all you want and then some. Truly and excellent watch.

This movie featured childhood friends who grew to lovers with basketball being the backdrop. Both Monica Wright (Sanaa Lathan) and Quincy McCall (Omar Epps) have dreams of playing bigtime basketball. But neither really looked at each other as more than friends, that is until life happens. But life happens in quarters for both as they figure out who they are together and apart. And in the end, the battle lines are drawn in this scene as Monica finally lets Quincy know that she needs him:

Great movie, great storyline and great acting. One of those movies you could watch over and over again.

Another movie that shows the good, bad and the ugly of college sports as Pete Bell (Nick Nolte) is under pressure to win and he surely finds out what he is or is not willing to do to put a winning product on the court at Western University. Neon Boudeaux (Shaquille O'Neal) and Butch McRae (Penny Hardaway) are star talents played by then NBA players, so their roles were not a stretch, but what makes this movie is the role that Nolte plays (Warning! Some curse words used in this scene):

This type of passion is shown throughout the movie by Nolte and is one of his best performances in the estimation of our site. Blue Chips is a good one.

As you can see, the action along with the acting and basketball intertwine perfectly to give you a classic film that can be watched over and over again.

The Program is a movie that has always been one of my favorites. It talks about the good, bad and ugly of college football from all angles and is in its rawest form long with the issues of each player that is featured in the movie. You got the highly-recruited freshman, the Heisman candidate quarterback, the linebacker that is working towards an NFL dream and the nobody that became a workout warrior and star in his senior year. This movie is a wild ride but of course when it is good, it is good. Like this scene here (Warning! Some curse words are in this clip)

Joe Kane (Craig Sheffer) made this pass to Darnell Jefferson (look outstanding as he bumbled, stumbled and found a way to make the winning play. And there are many more memorable scenes both on and off the field in this one which makes for a good movie of lessons learned.

This movie was more than just a movie. Denzel Washington plays head coach Herman Boone to perfection. The swagger and command he had of the team in the film was very realistic and he helped carry this movie along with the cast. But of course, these two characters were the more memorable characters of the entire movie:

The passion that Wood Harris (Julius Campbell) and Ryan Hurst (Gerry Bertier) displayed in this scene was awesome. And in a time (in this movie) where desegregation was brand new, this team bonded together as one team despite their differences. Excellent movie.

This concludes The Sports Awakening's Top Ten sports movies of all-time. Let us know your thoughts. 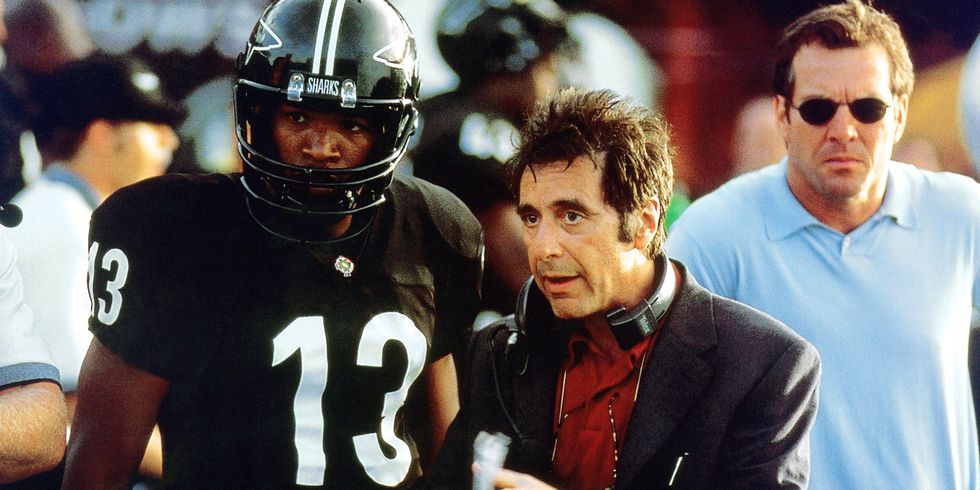