Enough With The Gabby Bashing

Gabby Douglas has been an amazing gymnast. She took over the television screen in 2012 with her graceful performances time and time again on the Olympic stage. And with the background of all her hard work that she did, she truly deserved all the success she had. This time around in Rio, Douglas was not the headliner of the team. The team this year was incredibly deep and led by a new African-American gymnastics sensation, Simone Biles. Douglas had to work harder to even make this team, as the talent level was through the roof, but she made it. And with her teammates, she was able to achieve another gold medal. But despite all those achievements, it seems like people just want to be distracted by all the others things that don't even really matter. Douglas has been the target of social media folks with the constant talk about her and her actions. And quite frankly, it has been hurtful and unfounded by many who want to hide behind the computer screen. But enough is enough and this needs to stop right now.

Douglas is a talented gymnast and has been one for some time now. She is the first black woman in Olympic history to win an all-around gold medal. But instead of focusing on that, social media has become focused on her hair. The hairstyle that all team members of the US gymnastics team are wearing is for them to all pull their hair back in a bun. But instead of noticing that, there are those that are ripping her on social media for wearing her hair like she has. Here are a few examples of folks going in on Gabby: 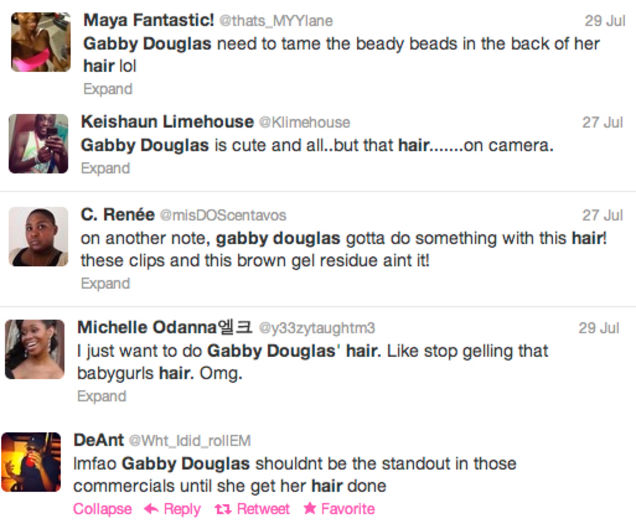 All these people may want to understand that Gabby is competing. Her hair is not going to look outstanding while she is in the heat of competition. And the disappointing thing is that most of the people that are commenting on her hair are Black people and mostly black women. In a world where black women are disrespected a lot by racism and sexism, to see some black women going off on Gabby Douglas was truly sad.

But Gabby's hair is not the only thing that is drawing the ire of people. When the team won their gold medal and the National Anthem was playing, that is when the judgement of her began yet again. She did not put her hand across her heart like the other gymnasts that were up there and that began another firestorm of people posting on social media. They claimed Gabby to be disrespectful and were posting things like this: 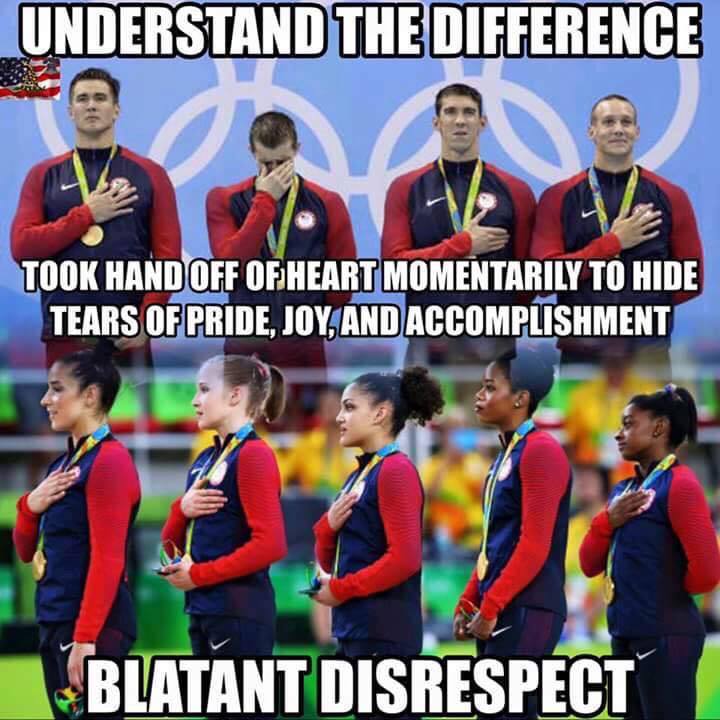 After seeing some of these completely frustrating pictures floating around, I did a little homework as to the positioning of people when the National Anthem is being played. Check out these photos: 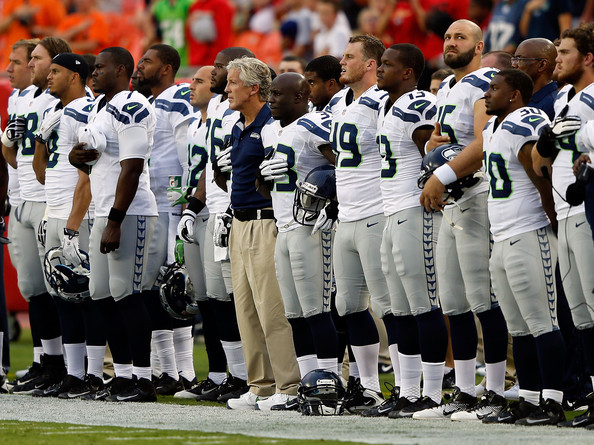 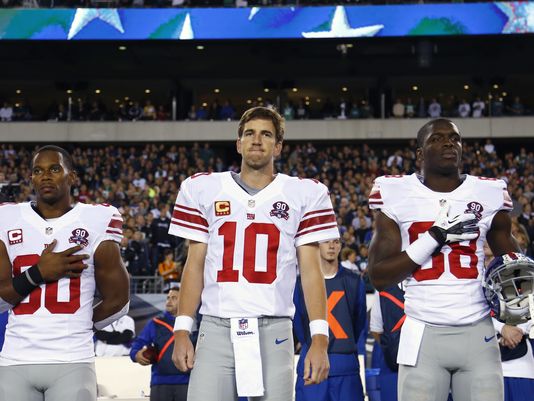 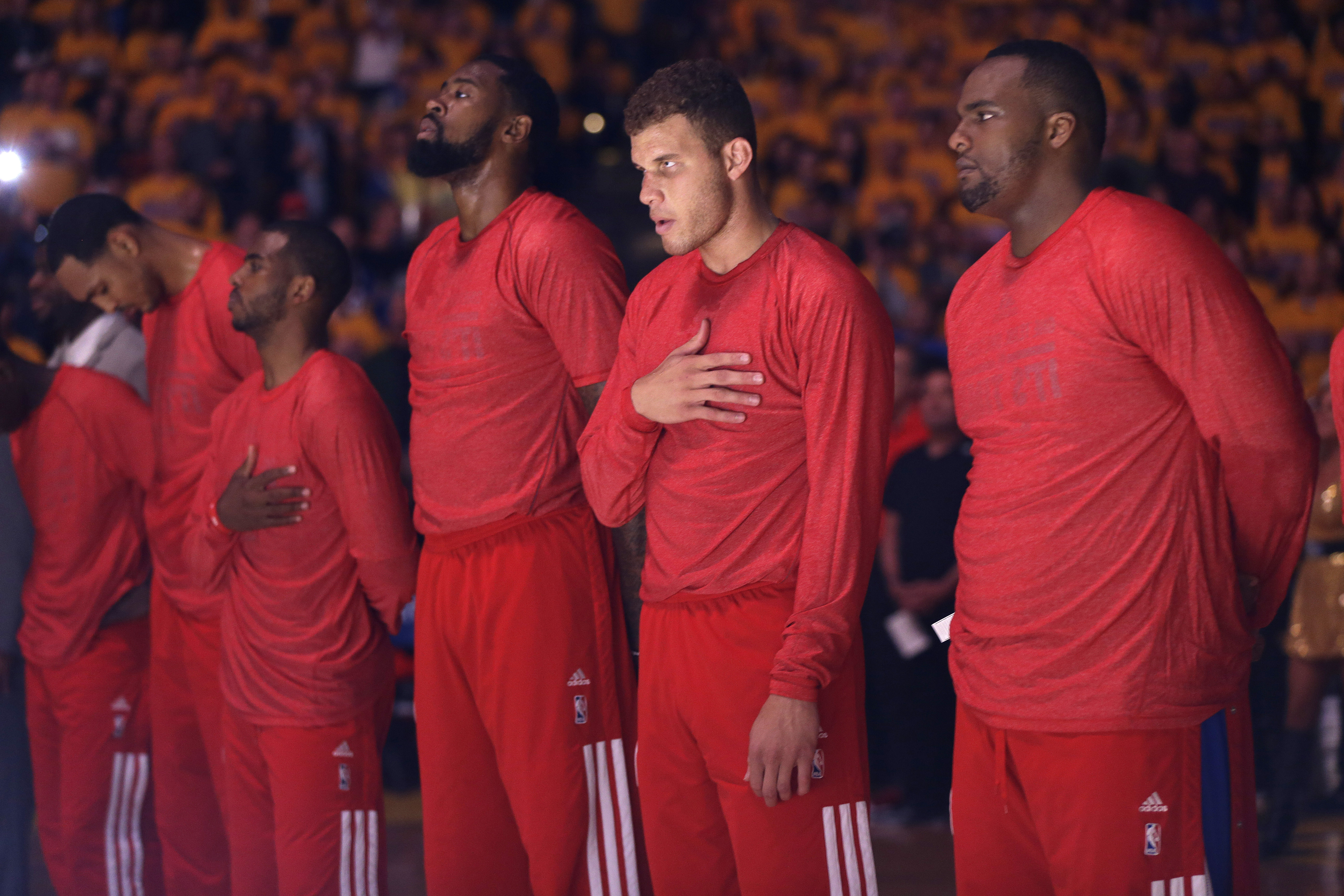 Notice in all three of these pictures, there are people with their hands across their heart during the National Anthem and there are some that don't have it across their hearts at all. And there was absolutely no one that said a thing to anyone that did not have their hands across their heart. Just because someone does not honor America the same as others does not mean that they are disrespecting the country. They just may have their own way of doing things, which is totally fine. And if many think this is wrong, then they would have hated the scene that I witnessed when attending the Nashville (Tennessee) Sounds AAA baseball game during the National Anthem. There were plenty of people that did not have their hands across their chest, but yet they observed the National Anthem and celebrated it in their own way. I did not see one person get mad or take to social media about plenty of fans not doing so. Many people need to get off their high horse and let Gabby live. She is a human being and last I checked, plenty human beings do things differently than the others. That is what makes us all individuals.

The amount of hate that Gabby Douglas has received has been frustrating and incredibly judgmental by many who are in the social media world. The talk of what she did not do has overshadowed all that she has done and that is a shame. Gabby, walk with your head high and your chest out. You are an incredible athlete and champion. Don't let any amount of foolishness steal your shine. Because those that are on your case are only doing so to try to bring you down because they cannot do the incredible things that you do. 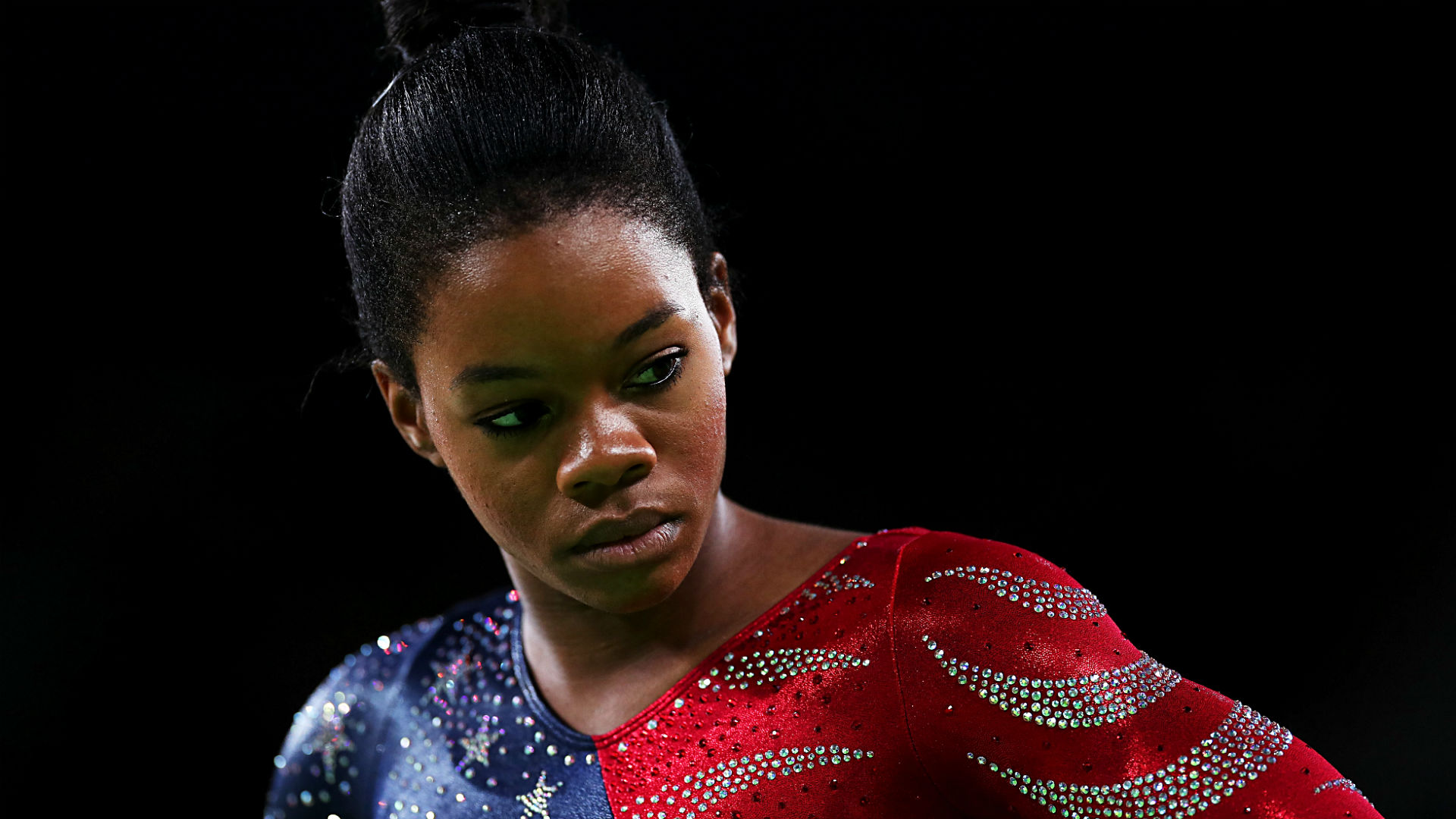