Why Is Dave Bliss Still Around?

Forgiveness is something that many are familiar with. There are plenty of people that ask for it, plenty that don't get it and others that refuse to forgive people for a litany of reasons. In sports, those same rules apply no matter what is going on. There are some that have been forgiven by the sport but not by the fans of the game still and there are others that have gotten the sympathy of tons of people when they maybe did not do much to earn it. Such is life and such is sports these days. But no matter what we think as individuals, life goes on and those people that fall into those boats when it comes to forgiveness have to go on everyday with their lives, trying to make themselves better and trying to survive in this world. Along with those these three categories, there are other cases where people have not offered apologies and yet they are forgiven. Crazily, there are people that continue to take up for them and there are others that continue to scratch their heads and figure out how those who don't offer an apology live with themselves. In sports, those same rules seem to apply.

Dave Bliss has been around the game of basketball a long time. He has coached at SMU and New Mexico with success and also with sanctions, but none of that compares to the stain that he left when he coached at Baylor University. Bliss became coach there in back in 1999 when he left New Mexico for the job with the Bears. Baylor was looking for success with Bliss as the head coach but instead they got a big mess. Bliss paid for parts of tuitions of players while he was there, which was bad in itself, but what he did when it came to players Patrick Dennehy and Carlton Dotson was even worse. Dennehy transferred to Baylor from New Mexico to play for in 2002. Dotson, like Dennehy, was a transfer at Baylor also. Well, both were apparently afraid for their safety for some reason there and purchased guns and were shooting them. Apparently, they were out shooting and got in an argument and Dotson shot Dennehy and killed him. After going on the run for a while, Dotson finally was found along with the body of Dennehy, which was a little decomposed at the time. The death was something that was horrifying to hear at that time, but what Bliss did was even worse. He actually came up with a story that Dennehy was a drug deal in order to cover up for his transgressions. Yes, you read that correctly. He tried to blame a dead young man for something he did on his own. If it were not for the taped conversations coming out, Bliss could have got away with it. Bliss received a 10 year show-cause penalty and that stain of trying to frame Dennehy posthumously was one that many thought would stick around forever.

Well, that forever did not last too long. Bliss has coached on the NAIA level (Southwest Christian), CBA level (Dakota Wizards) and the high school level (Allen Academy) since he was relieved of his duties at Baylor. Recently, he was named the head coach of Las Vegas' Calvary Chapel Christian boys basketball team. Along with being named the head coach, he is also going to be the school's athletic director. People can get second chances in life, but is giving Bliss a head coach and athletic director job something that you really want to do at this time? He may have acknowledge a bad decision in the Baylor situation, but did anyone ever hear him offer an apology? Another thing is we hear these coaches apologize for things they did in their pasts, but blaming a dead young man while creating a story about him being a drug dealer is something that takes the cake. How can any parent trust a coach that has done such things? It may have been over a decade since the incident, but I'm sure Dennehy's family still remembers what he has done. Yet still, he is afforded one opportunity after the other and the school has said they have done their extensive research on Bliss as well. Calvary Chapel is free to hire whoever they want and they chose Bliss for the gig, but when someone gets hired with this type of past, it makes you think on some things.

It's amazing that a man that created that first big black eye for Baylor in sports is still getting opportunities to be around young men after the things that he pulled. I wonder how some of the parents even feel about him being around their kids. Well, the moment is here now and Bliss is over their whole athletic program. I don't know what is crazier: the fact that he made up that crazy story to save his behind and is still coaching or that no one seemed to bring this matter up because it is a big deal. The fact that this can be swept under the rug without any flack is truly unbelievable. 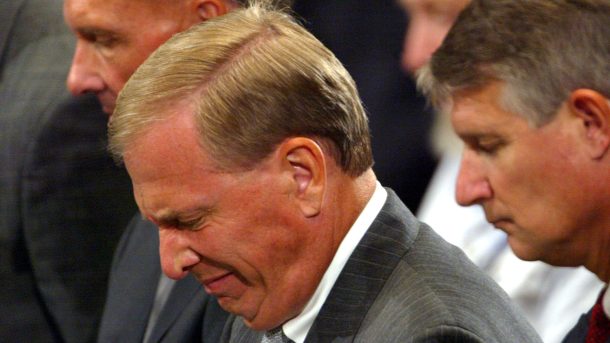