As we close the year, 2018 brought us all a lot of things. It brought us an Eagles championship that no one saw coming, especially with Nick Foles leading them. It also brought a predictable championship title defense by the Golden State Warriors. And it brought us the anticlimactic return of Paul George to the Oklahoma City Thunder. Just like 2018, 2019 has some moments that will surprise, disappoint and wow us all. The thing is we don't know what those moments will be. Well, while you try to wait on them, The Sports Awakening tries to predict them. Here are The Sports Awakening's 19 Predictions for 2019.

1)  The Alabama Crimson Tide will win the National Title 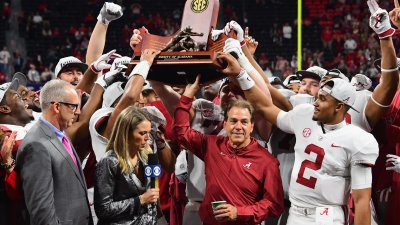 There's three guarantees in life. One is death, the other is taxes and the last of those is Alabama football winning titles. This year they have boatraced almost all of their opponents and done it with an air raid they have never really had offensively along with the running game, which is the staple of their program. Out of all the four teams left, only Clemson can beat them but can Trevor Lawrence figure out what Saban's defense is up to if they both get there? The survey says he will not as the Tide will be the king of college football yet again. 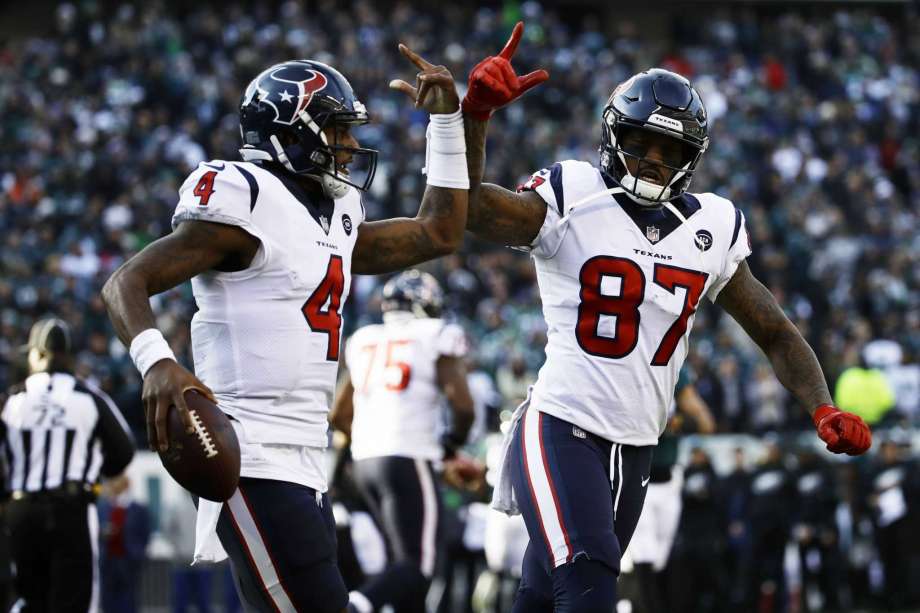 Plenty are going to look at me shocked when reading the opening line, but it is entirely possible. The Texans started the season rough, but have picked it up and will have a chance to win the AFC South division title this Sunday. Deshaun Watson is looking like the guy everyone thought he would be this season and the defense is ratcheting it up with the presence of defensive linemen JJ Watt and Jadeveon Clowney in there to mix things up. The Texans have all the components to represent the AFC and this year, they finally make that jump, bringing Watson back to his home state for a chance to win the Lombardi Trophy. 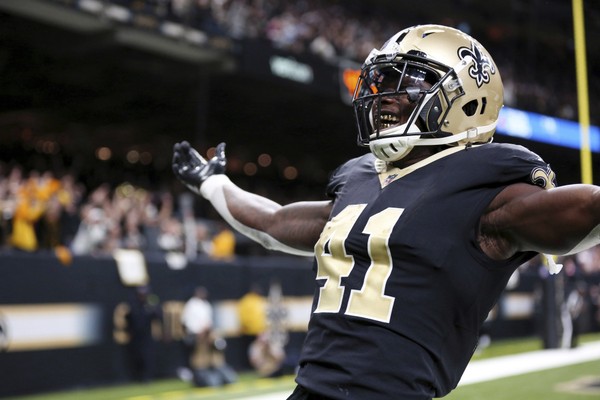 The Saints have homecourt advantage in the NFC for the playoffs and will make the Super Bowl this year in Atlanta. They will more than likely be favorites to win the title and when they do, you know what the narrative will be when it comes to some people wanting Drew Brees to be the MVP. Well, the ultimate mismatch on the Saints is Alvin Kamara and with one game to play, the Saints will pull out all the stops and unleash Kamara on Houston. The results will be ugly for Houston but good for Kamara as he throws up really impressive numbers on his way to Super Bowl MVP.

4) Tennessee will make the Final Four this season 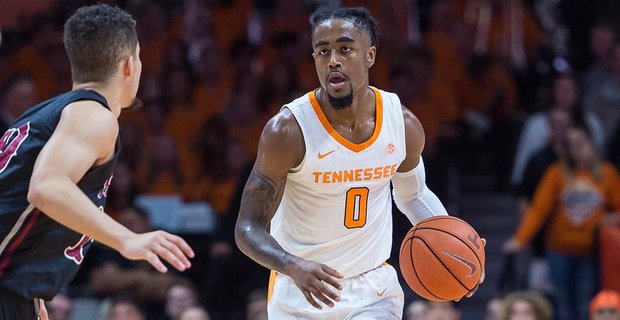 Tennessee has been known over the years for football and women's basketball, but now they are actually known for college basketball. Rick Barnes has revived the Vols' program and has made them a dangerous team not only in the SEC but in the nation. As the year goes on, they will only get stronger and more dangerous. With the combination of depth in the backcourt and two incredibly talented forwards in Grant Williams and Admiral Schofield, the end of the season will provide the Vols with the biggest highlight they have had in a long time on the basketball court: being a member of the Final Four.

5) Julio Jones will not be an Atlanta Falcon next season 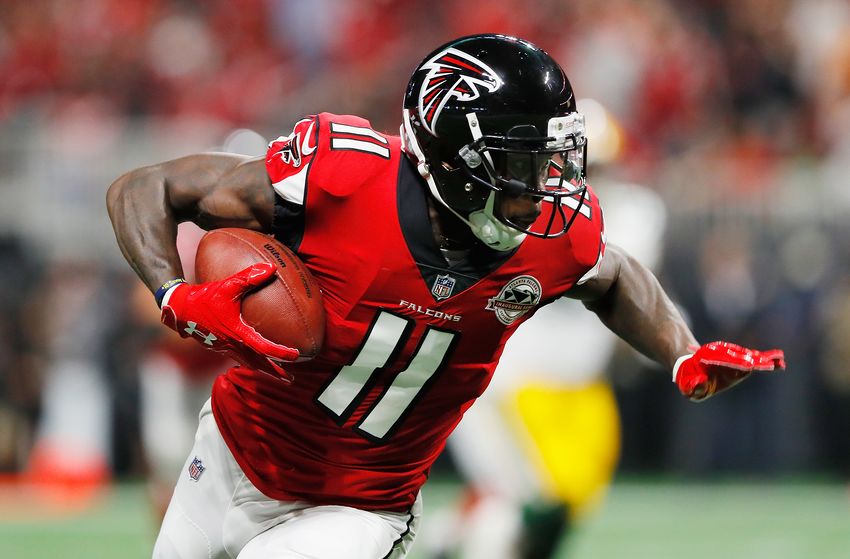 We saw the rumblings this offseason. He did not show up as early to camp because he wanted a new deal, but he did not get it. And again, he came out and put up numbers offensively while Atlanta did not make the playoffs. Julio wants to win but he wants to get paid as well and this offseason if Atlanta does not pay him, then you can expect him to want out. Don't be surprised if this happens and if it happens near the draft.

6) Someone other than Duke will win the National Championship 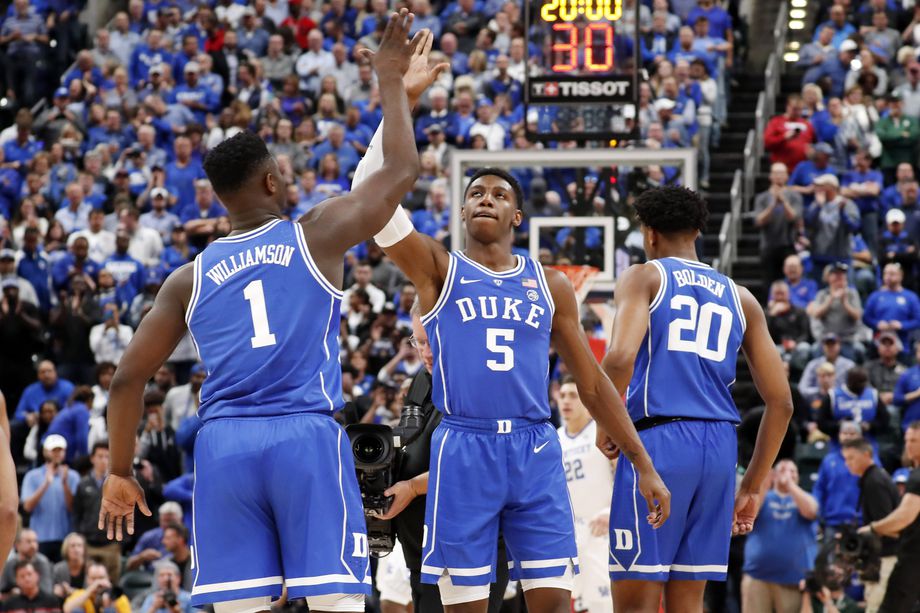 7) Kawhi Leonard will stay in Toronto this offseason 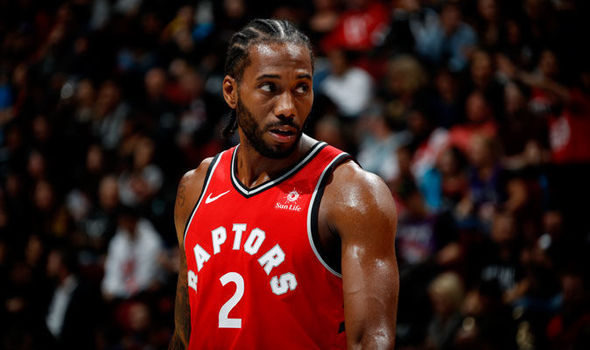 One of the biggest free agents this offseason will be Kawhi Leonard. Everyone has talked about how he wants to come home and the rumor is he wants to play for the Clippers more than the Lakers with LeBron James. While all that may or may not be true, the reality is it may never even happen as well. Look for Kawhi to actually stay Eastbound this offseason as the Raptors back up the Brinks truck to keep him North of the border after a successful season in Raptorland.

8) DeMarcus Cousins will be a New York Knick next season 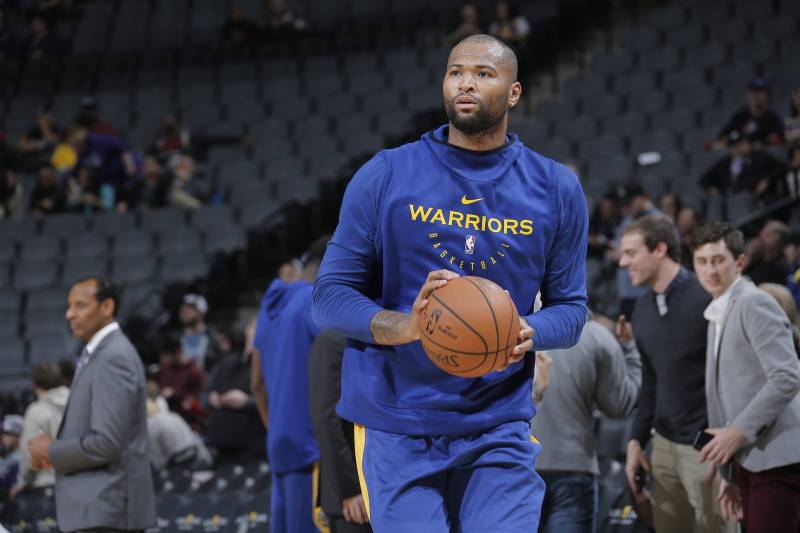 Think on this one: the Knicks will have the money available and have done better than anyone expected. One big piece could make them instantly better and even though they say they probably won't add a big piece this offseason, they cannot deny Cousins if he shows interest in them. Look for him to sign on and do damage with Kristaps Porzingis in the 2019-2020 season.

9) Larry Fitzgerald will officially retire after this season 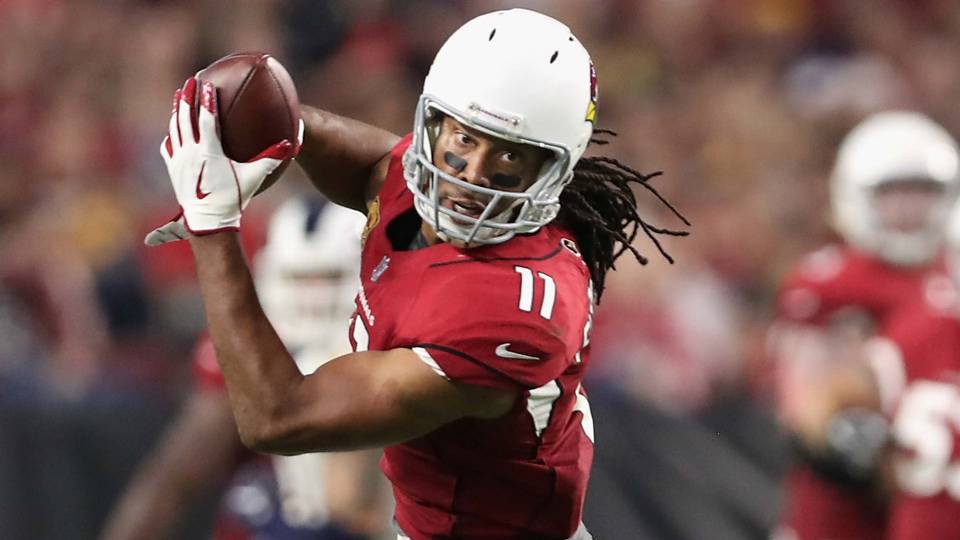 Fitzgerald has seemingly been around forever with Arizona. He's had plenty times where he could have left but decided to stay and not force a trade. There has been some good times and some bad times in his career there, but he never waivered on leaving the organization, at least in the public eye. With all good things though, they must come to an end. And with the Cardinals in the shape they are in and Fitzgerald's contract coming up for renewal, it would not surprise at all if he decided to retire. 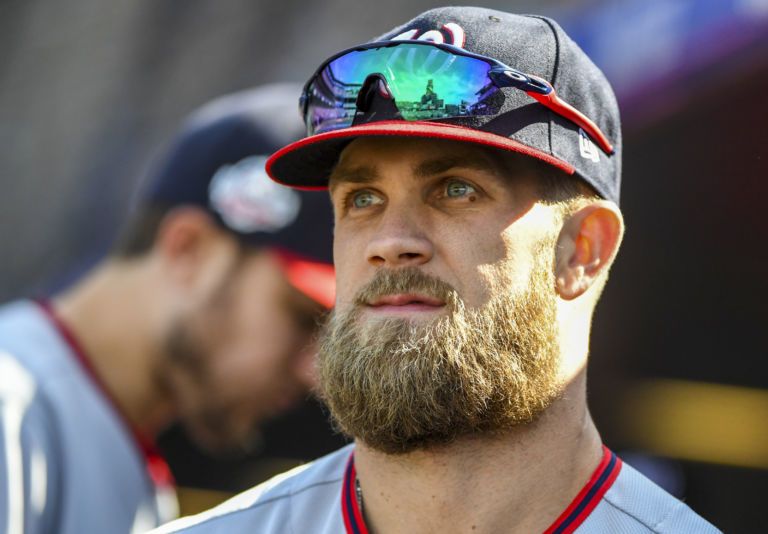 Bryce Harper is the biggest free agent in baseball right now and he and is agent, Scott Boras, are aiming for a $300 million deal. While some may think that's a crazy amount, someone will pay him and satisfy his demands. When that happens, get ready to see a guy that will never live up the contract he signs. More power to him for getting that check and getting a team to pay him, but there is very little chance he will do something to live up to that deal.

11) The Chicago Cubs will not make the postseason next year, causing Joe Maddon to be fired 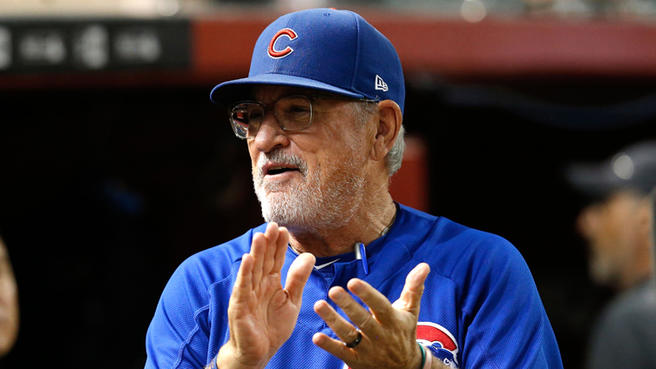 The Chicago Cubs have been in the postseason routinely under the watch of Joe Maddon as manager. Well, last year they made the playoffs but they did not meet the expectations of where they wanted to be, being eliminated before the World Series. With the pitching not getting upgraded and some questions about their lineup, it could be conceivable the Cubs miss the playoffs next season. And if that happens, the Cubs will sever ties with Maddon. 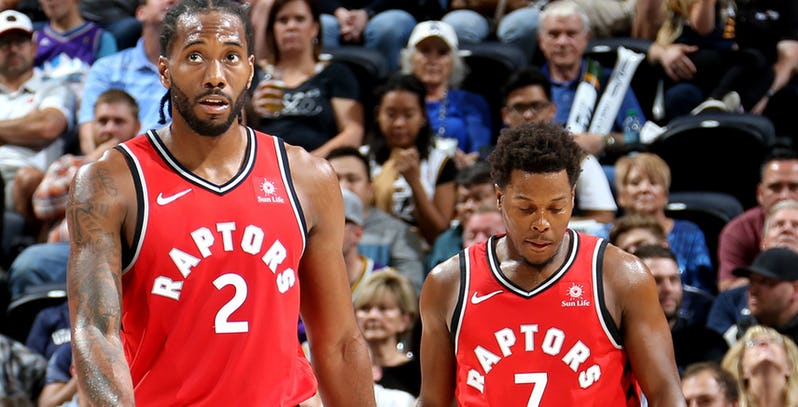 Everyone wasn't sure how the Raptors would come out this season since they traded longtime star DeMar DeRozan to the Spurs for Kawhi Leonard and Danny Green. Well, the early returns are Kawhi is back to be the star he was in San Antonio before the injury issue and Green is a key contributor to this Raptors team's success. And as good as they are playing with the new and old pieces, they are better than Boston and will be representing the East in the NBA Finals this year. With the Celtics, it's a case of anointing them too soon.

13) Justin Fields will land at Oklahoma 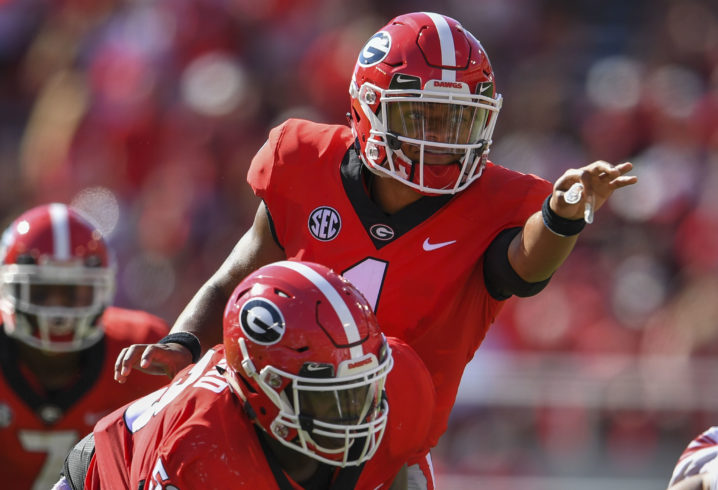 When Justin Fields, the best dual threat quarterback in the class of 2018, landed at the University of Georgia last season, some wondered what was going on. He was going to instantly be slotted behind sophomore Jake Fromm and more than likely was not going to play as much. Well, he got that realization and is now transferring. Teams like Ohio State and Florida State have been mentioned as landing spots for him, but in the end, he more than likely lands at Oklahoma. And if he gets a waiver to play next season, he could be the replacement for Kyler Murray there since it is assumed he will go play baseball next season. 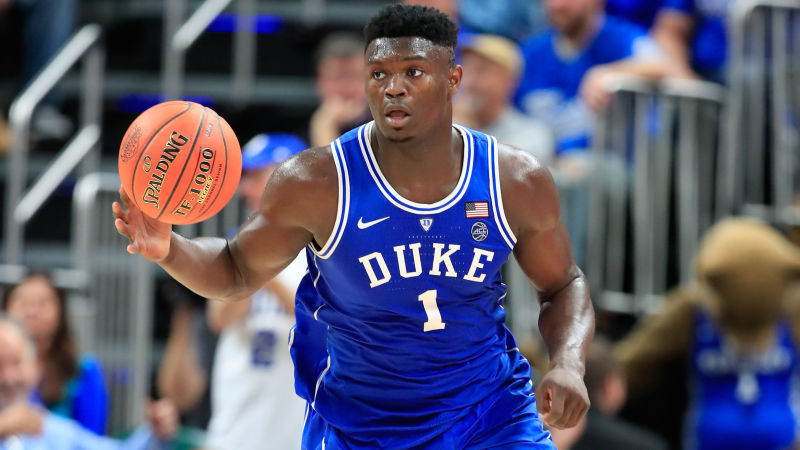 The hype has been real. Zion Williamson has been being talked about in the media for a while now because of his powerful dunks and his frequent high-flyer miles as he soars through the sky for bigtime finishes. That high-flying style along with the other things he does while playing have many thinking he could be the top overall pick. Well, contrary to popular demand, he will not be the top overall pick in the NBA Draft next season. The top-rated player in his class and Williamson's teammate, RJ Barrett, will have something to say about who is the top pick along with Oregon's Bol Bol. So as much as everyone wants Williamson to be the top pick, it probably will not happen. 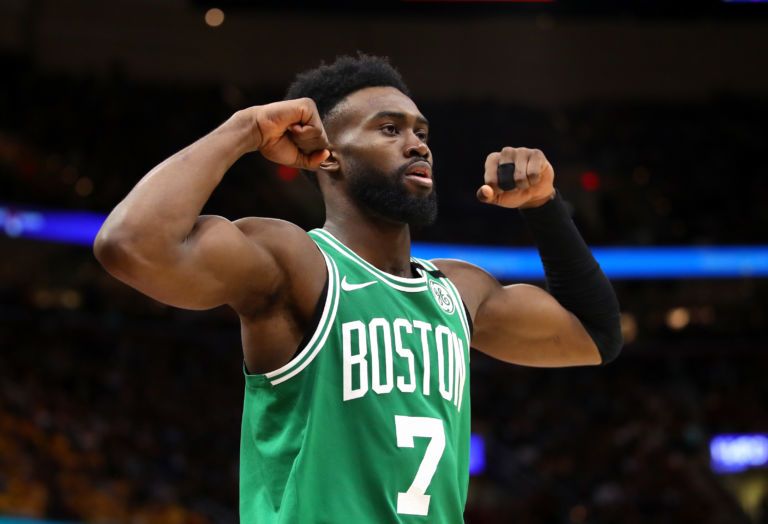 The Celtics have a logjam at the small forward position. Jaylen Brown, Gordon Hayward and Jayson Tatum all play the small forward position but the Celtics have been playing them at other positions to get them on the floor more together. Eventually, they have to make a choice though and the first domino to fall will be Brown. Hayward's contract along with his health will make it very hard to move his deal and the Celtics love Tatum and his complete offensive game. Brown isn't the shooter Tatum is not is he the facilitator Hayward can be, so it would be best for the Celtics to move him while they can get the most value for him. 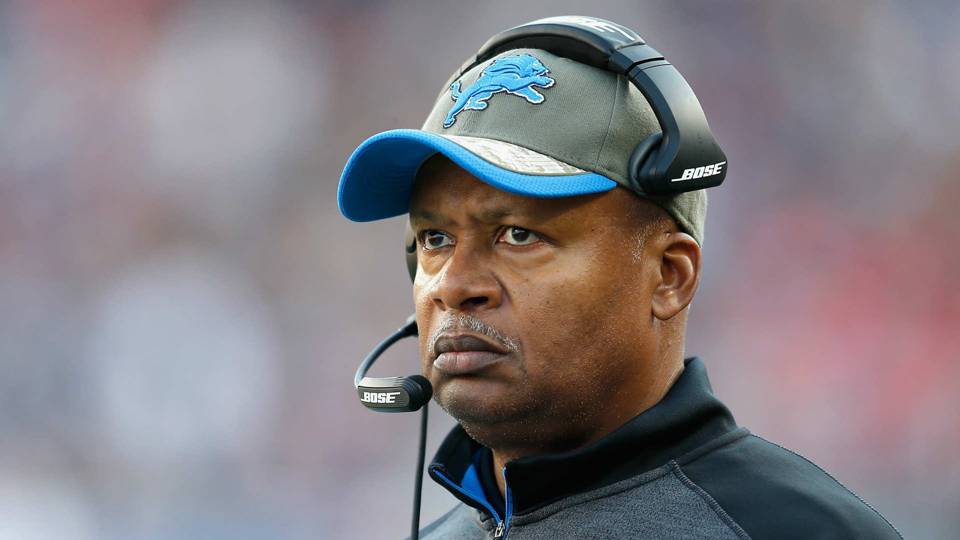 The Jim Caldwell era ended abruptly in Detroit last offseason and he has been looking for a job ever since. There are rumblings about him in Green Bay as the head coach as he interviewed for the position. He more than likely will not get that position, but he will be in the NFL somewhere next season. He has too good of a reputation as a coordinator to not be in the NFL next season and with the recycling bin that is NFL coaches, there will be someone interested and wanting to pay for his services.

17) Jimmy Butler will get paid by the 76ers this offseason 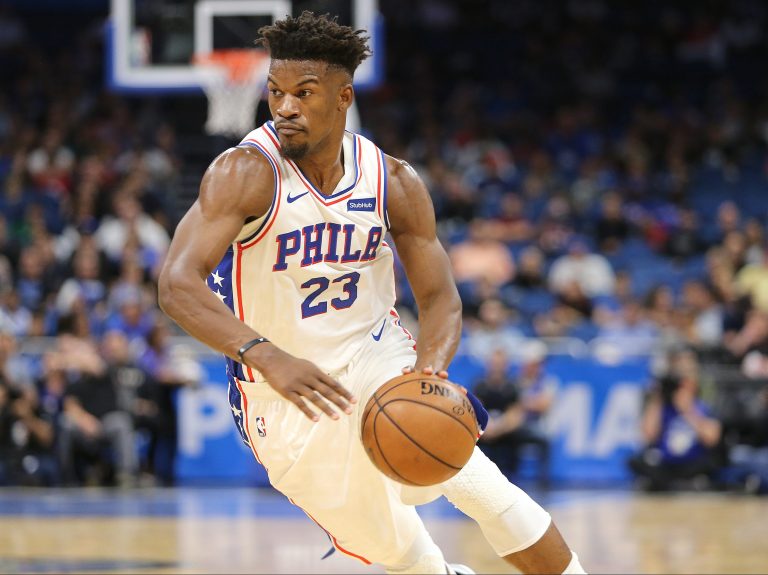 The Jimmy Butler question looms for the 76ers this offseason. They gave up some good core pieces to acquire him, sending Robert Covington and Dario Saric to the Timberwolves for the veteran star. Butler will be a free agent this offseason and the 76ers have the power to give him his best deal. The likelihood is he will stay a 76er going into next season. The only question is how many years will his new deal be and how many millions are the 76ers going to give him. 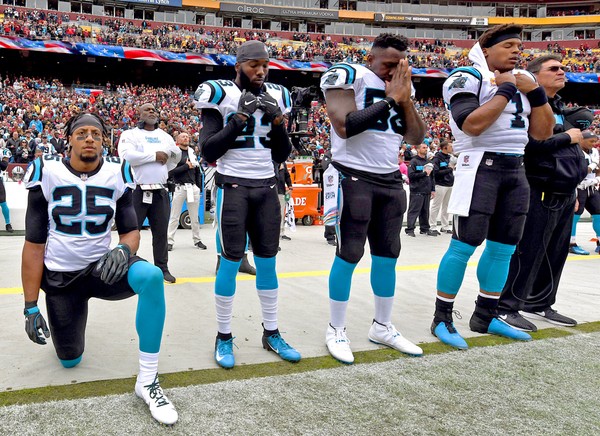 The Carolina Panthers were the team that finally ended Eric Reid's exile from the NFL by signing him to a deal for the rest of the 2018 season. While the Panthers have not done well record-wise, it hasn't been because of the play of Reid. And because of his solid play, he will be back in Carolina next season making things happen with that secondary. So to those that want him gone, he will be back. Get ready to see him out there making plays and continuing to fight for change in his words and actions.

19) The power of The Athletic will continue to grow

The Athletic wasn't something anyone was thinking about a couple of years ago, but now everyone is talking about it. They are getting high-end talent left and right and producing exclusive content while changing the business model in sports journalism. Look for that model to continue to grow in 2019 as more writers continue to make their way over to The Athletic. And while some are wondering if this business model is sustainable, it seems The Athletic continues to win each and every day.

There it is! Nineteen predictions for the 2019. It should be interesting to see how all these come out.