Will The Real Tennessee Vols Stand Up?

The Tennessee Volunteers had a bunch of hype coming into this season. They finished last year destroying Northwestern 45-6 in the Outback Bowl. And with everyone coming back, they were pegged as the team to watch this season in the SEC. And just like many believed this was the year for the Volunteers, the polls believed it as well. They put the Vols up as high as ninth to start the year and there were many that looked forward to the obliteration they thought was coming on college football's opening weekend. Well, things did not happen quite like many thought it would. Instead of blowing out Appalachian State, the Vols stumbled their way to a heartstopping victory. In fact, they actually needed overtime to beat Appalachian State 20-13. And just like that, the worries of many Vols fans kicked in. The team looked asleep at the wheel during the game and was very fortunate to pull off the victory. And some might say that if Appalachian State had a better kicker, then they would have won the game and Tennessee would be reeling still. But nevertheless, they won. But of course, the fall happened in the polls. The Vols fell from ninth to seventeenth in the polls as they head to the Battle Of Bristol this weekend against Virginia Tech in front of over 150,000 fans. The excitement will be there for Vols fans, but so will the worry they have for their team.

The expectations for Tennessee have not been this high in a long time and many were dismayed by the opening win. And there are many that believe the hype was too much to begin with. So for them to regain their stride and get back in the swing of things, a few things have to happen. First, the Vols have to get more physical up front. Appalachian State was supposed to be a warmup contest for the Vols. But instead, the guys they had up front were giving the Vols fits. To give you an example, the Vols and the Mountaineers both ran the football 43 times last Thursday. The Mountaineers averaged 4.3 yards per carry. The Vols, who were supposed to dominate there, only averaged three yards per carry. That right there is an indication as to which team was the more physical one. And it was evident in the game what was going on. The Vols just were whipped by the Mountaineers in the trenches. And if that happened against Appalachian State, then imagine what could happen if they play that way against the likes of Florida, Alabama and Georgia. If they show up the way they played against the Mountaineers, then that would end up being an embarrassing loss.

The line play definitely has to improve and that is without question. But along with that, the team as a whole has to step it up in the attitude department. It seemed like the Vols came out with the attitude that Appalachian State was supposed to lay down for them since they were the higher ranked team and were more talented. Apparently, Appalachian State missed the memo on that one and came out ready to knock the Vols out in the first week of the season. That, of course, caught the Vols a little off guard. And with that happening, it took some time for the Vols to adjust and get some energy about themselves. Eventually, they gained control and stormed back into the game. And although it took to overtime, the Vols looked better than they did in the first half. That game showed them right then and there that they cannot just show up and play the games. They have to be prepared for them as well. Or else, things like upsets can happen. Along with upsets, embarrassing scores can be posted on your team and cause some real frustration among the fanbase.

This was only one game and the Vols did pull out the victory. But that loss for them better serve as a wakeup call. If it does, then expect the Vols to come out fired up and ready to take down Virginia Tech this weekend in Bristol. But if they come out with the same lackadaisical attitude against the Hokies, then there will be serious issues and this season could come off the rails rather quickly. For Vols fans, they better hope this team shows up and shows out to the potential they have right now. 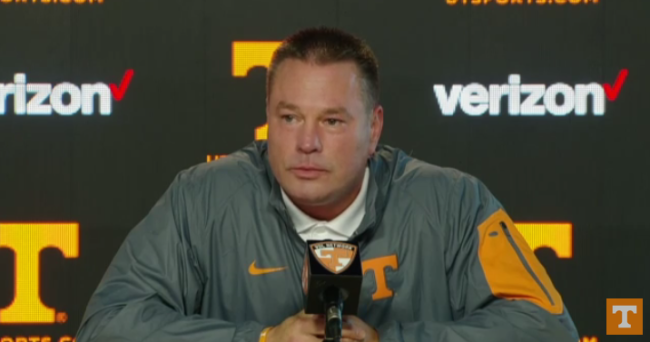