Mistakes Cost The Vols In Gainesville

The Tennessee Vols were 2-0 going into their game in the Swamp. The great thing was they were undefeated but the bad thing was that no one was sure what to make of the team so far. They still had questions at quarterback, the defense had a bad game in the first game and a good game in the second and there was some question as to how this team would do when challenged in the SEC. Well, there was some questions that were answered for the Vols and Vols fans as they went to Florida and lost 26-20 on a last-second heave from Florida redshirt freshman quarterback Felipe Franks to Tyrie Cleveland. The loss ends whatever dreams the Vols had of going undefeated (we know that wasn't going to happen anyways lol) along with starting them on the wrong side of the win/loss column in the SEC East. Some may love the resistance the Vols showed in this game, but along with that, there is some serious things the Vols need to address.

If there was ever any question who the main playmaker was in this offense, that question was answered Saturday with the play of John Kelly. Against a Florida defense that was supposedly tough against the run, Kelly ran through them for 141 yards and a touchdown on just 19 carries. He also led the Vols in receiving with 96 yards on six receptions. While that all might be good for the Vols offense, you notice that there was not really any other playmakers involved consistently throughout the game. Some of the issue of getting others involved is on the offensive coordinator, but part of the issue of getting other players consistently involved falls on the quarterback play. Quinten Dormady had his moments in the first two games, but he has not had a consistent game completely yet. He surely showed his resiliency leading the Vols back to tie the game late in the fourth quarter, but he also showed his inexperience as a starting quarterback in the SEC. Dormady was facing some pressure and that was to be expected, but instead of setting his feet and making throws, his footwork was off, leading to some bad throws which led to two of his interceptions in the game. Dormady is a solid quarterback, but he has to be better as the season goes on for the Vols to win games and to keep teams from focusing all their energy on John Kelly to shut the Vols offense down.

Offensive issues were evident, but the Vols defense is not void of their issues as well. The Florida offense had not looked very good at all versus Michigan in their first game out, only totaling 192 yards for the game. At that point, the Gators were feeling the offense was going to be the downfall of their team yet again. Well, they may have not put up points like they wanted, but they surely performed well in their second game of the year. Against the Vols, the Gators doubled their amount of total yardage and they also went 7-14 on third-down conversions (only 2/13 versus Michigan in the first game). The Vols defense proved to be the magic elixir Florida needed to get better. The biggest issues for the Vols defense has been discipline and tacking. Plenty of times, the Vols were in great position to make plays, but they were not able to, often missing tackles or watching a running back/receiver run right past them. The coach can only get the players in the position to make plays but he cannot make it for them. Along with missing tackles, discipline has been an issue. The alignment of the cornerbacks for Tennessee has been talked about by fans and announcers alike, but that is on the coach. What isn't on the coach, however, is playing your technique. The last play of the game is a brilliant example of why that is an issue. The Vols had battled back to tie the game and all they had to do was hold defensively to go to overtime with Florida. As a safety, your job is to stay deeper than the deepest at all times, but especially with the situation that was there. Instead of staying deep, the safety for Tennessee comes up to meet the wide receiver and the receiver runs right by him, catching the game-winning touchdown. That kind of undisciplined play has plagued the Vols for the last couple of years under the leadership of defensive coordinator Bob Shoop and it must be solved or they will not be very good there.

The loss by the Volunteers in the fashion that they loss has to be disheartening. What has to be eve n more disappointing for the Vols has to be some of the things they did to cost themselves the game. All in all, there was some good plays that happened. The chasedown strip from behind by Tennessee defensive back Justin Martin saved the Vols and kept them in the game. Unfortunately, the mistakes at critical times cost them a loss. The key to the next game is taking those mistakes and learning from them. Hopefully for Vols fans, that means more wins while they learn as a team instead of learning from losses. 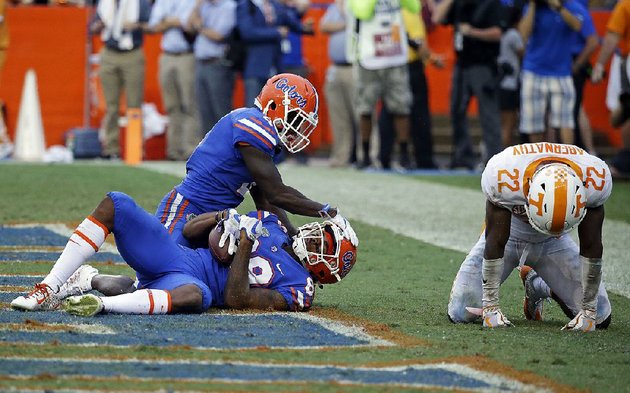