The Vols Lose Big In Alabama

The Tennessee/Alabama game is usually one that creates some excitement. Despite the recent dominance by the Crimson Tide of the series, there have been some exciting and clutch moments that have been shared on both sides of the equation. So going into this season, there should be some excitement right? Well, that was incorrect. The stench of losing three straight SEC games is all over the Vols at this point and heading into this game, there was not much of a feeling they would be competitive. They were an underdog of over 35 points against the number-one ranked Crimson Tide and they were playing in Alabama. Well, the good news was the Tennessee defense came out to play early. The bad news is the defense could not keep it up and the offense was non-existent. The result of the game was a 45-7 loss by the Vols and the Crimson Tide covering the spread the betting folks had for them. The Vols now have lost four straight games in the SEC and things are not looking any better. With the inevitability of Butch Jones getting fired, the team showed exactly why he would be out of there.

The Tennessee Vols defense was playing well to start the game, but as usual, the mistakes ended up costing them. One huge mistake cost them early in the game and it came courtesy of defensive lineman Jonathan Kongbo. The once highly-touted defensive lineman was getting pressure on Alabama Crimson Tide quarterback Jalen Hurts and while doing so, got his hands up in the face of Alabama's offensive tackle. While he was committing that penalty, Tennessee's defensive backs had made a great play. Alabama tight end Irv Smith was catching the football and had it punched out from behind, causing the football to roll out of the back of the endzone and give the Vols a touchback and possession of the ball. Tennessee would have had the football back and kept Alabama from scoring but it always seems like they commit a silly penalty that costs them. In this instance, Kongbo was the person who committed the silly penalty, but this has been their mode of operation all season unfortunately. And again, a bad penalty hurts them because the Crimson Tide would take that break and convert it to seven points.

While the defense was having a few penalties not go their way, the Vols offense had their own set of issues. The switch from Quinten Dormady to Jarett Guarantano was supposed to jump start the Vols offense. The good thing about the change in quarterback was the turnovers were decreasing, but the bad thing was the offensive line and wide receivers are still the same. The Vols entered the season having more confidence in their offensive line and they now sit as the team that has holes all in their offensive front five. Guarantano was under siege all game long and took some serious hits in the pocket. Although Guarantano is more mobile than Dormady, there is not way he can run from multiple guys coming at him from many different angles. The offensive line looked to be miscommunicating their protections along with just flatout getting beat. The result will end up being Guarantano getting hurt if the Vols offensive line keeps this up. Along with the offensive line having issues, so have the Vols wide receivers. It seems as if they have trouble getting separation from opposing defensive backs. Because of that, Guarantano has nowhere to throw the football at times and has to make things happen with his feet. Honestly, this is a lot to put on a young quarterback but the good news is you don't have a statue at quarterback there anymore. Bad news is this offense has not developed over the season.

The Vols take on the University of Kentucky next time they take the field. As it stands right now, the Vols are an underdog to even them (when is the last time that has happened?). Tennessee has definitely got some things to think on besides wondering about the status of their head coach. They are 0-4 in the SEC and the road does not look any easier for them considering how bad they are playing. 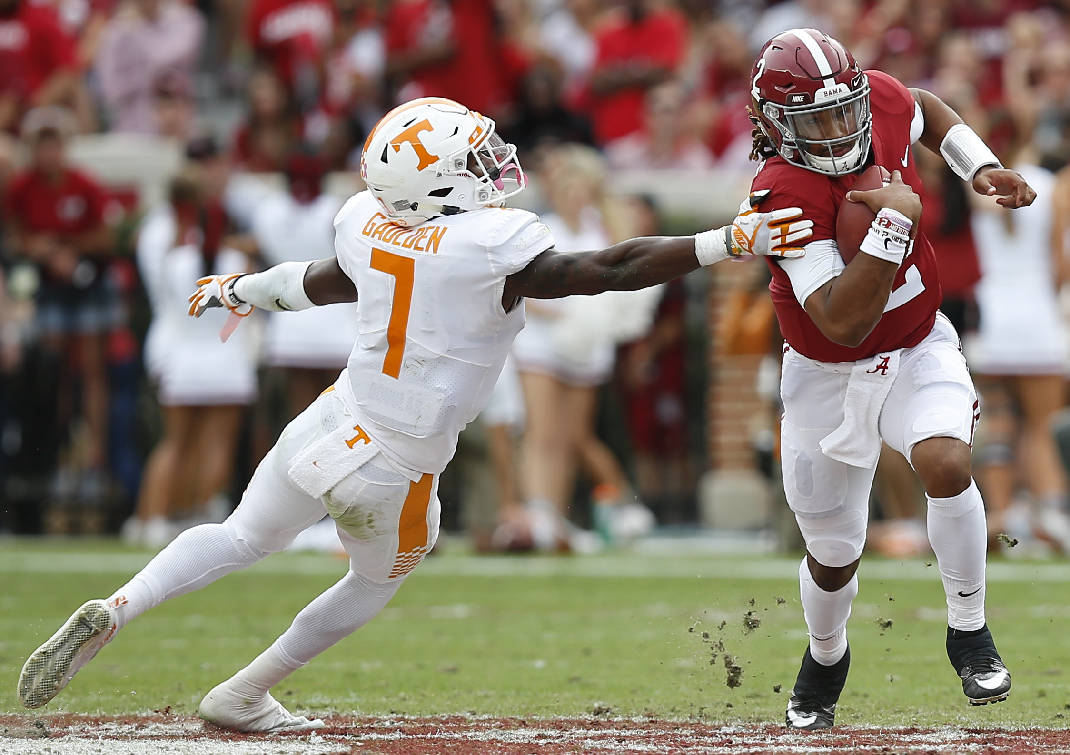