Vandy Makes A Statement In Game One

The Vanderbilt Commodores ended last season on a bit of a sour note. After two huge SEC wins versus Ole Miss and Tennessee to close the season, the Commodores ended up losing big in their bowl game versus NC State 41-17. Even with that ending, there was optimism heading into this season because the Commodores were bringing back some experience and skill. Of course, having that skill and actually using that skill and experience are two separate things and Vandy fans were wondering how they would come out to start the season. Vandy was taking on in-state rival Middle Tennessee State, which is a game that they were supposed to win. In the past, the Commodores have either lost or played close with teams that they were supposed to beat, but in this one they handled business without a doubt. The Commodores beat the Blue Raiders at MTSU's home stadium 28-6. The win was good for them, but what was even more impressive is how they got it done.

The identity of Vanderbilt's offense has always been centered around Ralph Webb. The talented senior running back has been the bellcow for the Commodores running game, achieving back-to-back 1,000 yard seasons. So going into this game versus Middle Tennessee State, the key for them was going to be stopping Webb and the running game. The Blue Raiders did just that, holding Webb to only 49 yards rushing and holding the Commodores to 71 rushing yards total. With those numbers and Vandy's prior dependence on the running game, you would think that Vandy would have lost the game. Fortunately for Vandy, quarterback Kyle Shurmur was up for the challenge against the Blue Raiders. The junior quarterback went 20/28 for 296 yards along with three touchdowns and zero interceptions. He took what the defense gave him and then made some plays in the passing game, including one short pass to Webb that he took 73 yards to the house. At this point, it seems like Shurmur is more confident than he was last season in the offense and his ability. At the start of last season, there was no one that was sure he would be their starting quarterback for years to come. As it stands now, Shurmur has performed well in three straight regular season games, piling up seven touchdowns to only one interception. It was only one game to start the 2017 season, but there is definitely more confidence in Shurmur and his weapons to take over when they need to.

The offense played well and Shurmur did great in the passing game. While the offense was very good, so was the defense. The Middle Tennessee State Blue Raiders have a spread style of offense that is used to putting up gaudy offensive numbers and points. That type of offense is a challenge for anyone to take on. Vandy was very solid defensively against teams that run the style of offense that MTSU runs last year and hoped to be even better against them this year with what they had coming back despite the loss of defensive lineman Adam Butler. If game one was any indication, this defense will be tough. The Commodores allowed the Blue Raiders to move the football in the first quarter, but then they put the clamps on their offense, not even allowing them 10 yards of total offense in three possessions. At that point, the Vandy defense fully took over minus one drive in the fourth quarter. Couple in the limiting of their offensive yardage and points with the fact that Vandy had five sacks and they basically took the life out of the Blue Raiders.  We know that Vandy will face more talented teams than Middle Tennessee State, but this was definitely an encouraging sign going into the rest of the season. Derek Mason, who made his name as a defensive coordinator for Stanford, definitely has his imprint on this defense and is they can continue to grow, then they could remind teams of dominating defenses of Vandy's past.

All in all, the Commodores and their fans have to be pleased with the outcome of the game. This win bodes well for them and is a win they were supposed to get and did. Along with the win, they showed that they have grown a little bit from last year on both sides of the ball. The offense showed they could win without a big running game from Ralph Webb and the defense got it done at all three levels and smothered the Blue Raiders offense. In Year 3 of the Derek Mason experience, the Commodores are looking as solid as they ever have and the scary thing is they can still improve this season. Only time will tell how much they improve. 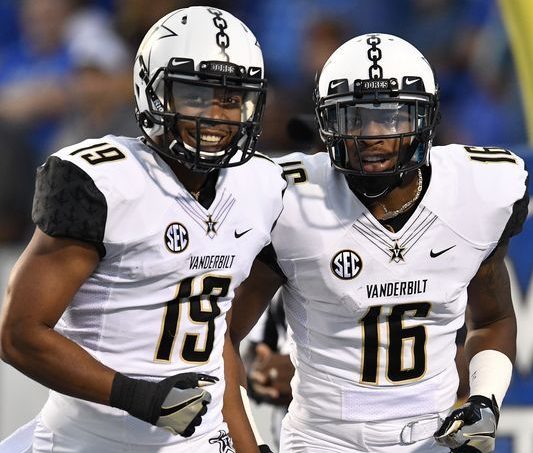