Vandy Gets It Done In A Huge Game

The Vanderbilt Commodores had been very impressive to start the season. They dominated Middle Tennessee State to start the season and the Commodores also dominated FCS team Alabama A&M as they should have. They did what they were supposed to do in the first two games, but there were still some questions about Vanderbilt. There were fans and analysts that  wondered was their quick 2-0 start because of the competition they faced or if it was because they were getting better. Saturday night they had the opportunity to prove to some of their doubters that they were for real. The Commodores were hosting  Kansas State, which was the eighteenth-ranked team in college football. The Wildcats were looked at as having one of their best teams in a while as well as being a very physical team. The challenge was laid before the Commodores and it was up to them to accept it. Well, Saturday night, Vandy not only met the challenge but they defeated the Wildcats at home in a low-scoring game 14-7. The feeling around the stadium was one of joy, as Mason's Vanderbilt football team was victorious over a top-notch opponent., At this point in the Derek Mason era, this is as excited as Vandy fans have been since he has been here. The win was good, but it was how the win was accomplished that had to be the most satisfying.

The Vanderbilt defense has been flying around all season long. They shut down the high-flying passing attack of Middle Tennessee State University. The Commodores defense also took all hope from the Alabama A&M offense with their physical play. The matchup against the Kansas State Wildcats was one that would be unique to them so far this season. The Wildcats are an atypical Big 12 team in the aspect that they are a physical team that likes to grind things out on the ground rather than air it out like everyone is accustom to seeing in the Big 12. Needless to say, this game was going to be one that was going to challenge how physical Vandy would be. The Commodores defense gave up some plays, most notably some runs to quarterback Jesse Ertz, but for the most part, they handled business. The Kansas State offense was only able to get the ball in the endzone one time, which was early in the second quarter of the game. Other than that, Kansas State was harassed by the Vandy defense all game, as the Commodores forced two turnovers and caused a missed field goal. The defense, which people have been impressed by all season, was led by linebacker Charles Wright, who just made big play after big play when Vandy needed it, as he collected 1.5 sacks and 2 tackles for loss. The Vandy defense is for real and has only given up 13 points in three games to start the year.

The Commodore defense was as advertised, but what was more impressive was the resolve of the Vanderbilt offense and more importantly quarterback Kyle Shurmur. The junior quarterback had been having a great season heading into the Kansas State game, throwing seven touchdowns while not throwing an interception at all and completing over 70% of his passes. Those numbers are excellent through two games, but the real test on Saturday would show if he truly had grown from the growing pains that he suffered through last season. In this game, he made some mistakes and was not able to get going in the passing game like he wanted, but Shurmur did show the maturity that people had been looking for. He made some big throws intermediate to deep down the field when given the opportunity and he showed his toughness as well. No series was more evident of his growth than the series in the fourth quarter when Vandy took the lead 14-7. After Vanderbilt's defense was able to get an interception, the Vandy offense immediately struck as Shurmur hit wide receiver Trent Sherfield with a pass that would total 32 yards with the catch and run and get the football down to the one-yard line. After two failed attempts to run the football in, Vandy spread the field and ran a pass play. The snap was bad and fumbled by Shurmur, but he still had the patience to gather the football, scan the field and run for the goal line. He was met right before the goal line, but he had enough wherewithal to stretch the ball over the goal line, giving Vandy the game-winning touchdown. That may not have happened last season with the lack of confidence Shurmur was playing with, but this year he has been playing with a high level of confidence and his goal line effort encapsulates it.

The Commodores head into next week versus Alabama with a ton of confidence. They are playing as dominant defensively as they have in a while and their offense is more explosive and finding ways to get it done consistently. Beating Alabama next week will be a tall task for Vanderbilt to try and accomplish, but the thoughts of them not having a chance have quickly changed at least for some people that view the Commodores. It will be interesting to see how they play when they take on the face of the SEC. 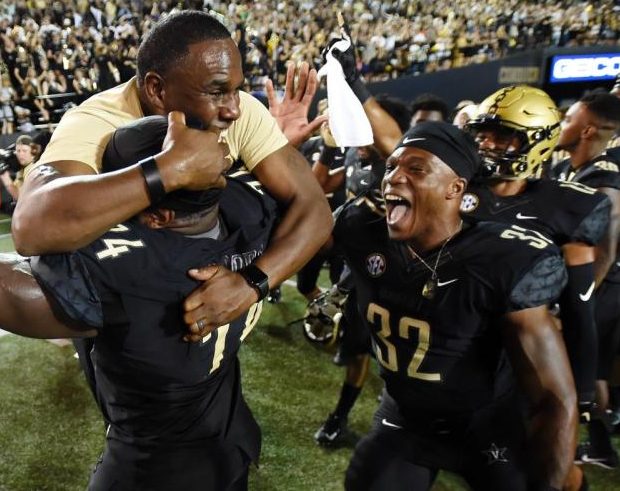