The Vanderbilt Commodores took care of things in a rather workmanlike way last week versus the Middle Tennessee State Blue Raiders. They shut down MTSU offense with ease and they were able to get things going on offense on their way to a 28-6 domination. After that win, there were some Vanderbilt fans that were happy with what they say. There were some that even said that Vandy was the best team in the SEC East. While that talk may have been premature, there was real optimism around the Vanderbilt football program heading into their home opener versus Alabama A&M. The matchup was thoroughly in favor of the Commodores on paper, but there have been times in the past that the matchup Vandy is supposed to win did not come as easy. Vandy, in the past, has had a propensity for allowing inferior teams to stick around and make games closer than they should be. So with the hype that some Vanderbilt fans had around this year's team after their first game, would Vandy let them down and play down to their competition? We got our answer to that question pretty quickly.

Vanderbilt's offense looked good against the Blue Raiders last weekend and this weekend, it seemed like they expanded their offense a little bit more. Quarterback Kyle Shurmur had a good game against the Blue Raiders and lead the offense while MTSU held down the Vandy running game. This week, the running game was better but so was Shurmur. The Commodore offense had their usual passing game with intermediate to short routes and passes to the tight ends, but they did something they really have not done effectively in a while on Saturday: throw the deep ball. In the past, his touch was not as good when it came to throwing deep passes, but it seems like he has been working on his mechanics because he dropped a few passes right on the money to his receivers while they were deep down the field. Of course one of those touchdown passes had a wide receiver so wide open that he could have walked into the endzone, but one other pass was a thing of beauty. Sophomore wide receiver Kalija Lipscomb ran a perfect post pattern and had the Alabama A&M defensive back right on his hip as he made the cut towards the middle. Shurmur noticed the positioning that Lipscomb had and he dropped it right in the bucket to him and Lipscomb did not even have to break stride. He broke a tackled and waltzed into the endzone for the score. There will be many that will point to the competition they were facing, but it is obvious that Shurmur has been working on his game and his mechanics. The offense did not take Alabama A&M lightly as they came out and dominated their defense.

The offense of the Commodores looked really good, but so did the Commodore defense. Last season, they may have slacked at times, but they still kept the team in games while the offense was trying to figure it out. Saturday they could have slacked off some, but they kept the pressure on the Bulldogs all game long. Alabama A&M quarterback Aqeel Glass could never get comfortable in the pocket or running around in their offense because the Vandy pass rush was on him every  time he looked up. The pass rush is something that is welcomed with Vandy but what also is welcomed is the playmaking ability in the front seven. A perfect example of that today is when Glass was getting pressure brought on him while he was trying to pass the football. The Vanderbilt defender saw him trying to pass and put his hands in the air, batting the ball and intercepting it as well. That type of playmaking was not always there for the Commodores last season in their front seven and it seems like there are multiple players up front that can make plays. As the season goes on, the different players Vandy can throw at you up front will make it hard on their opponents provided they can keep up this type of pace.

The Commodores did what they were supposed to do today on both sides of the football and as a result, they coasted to an easy win. The Commodores are flying high, but there is an even bigger test come next Saturday when the Kansas State Wildcats come to town. To those that think Vandy is for real and to those that think they are not, a win next week would go a long way. While that all seems like a good thing, the main thing is that Vandy continues to prepare like a team that no one really believes in but themselves. 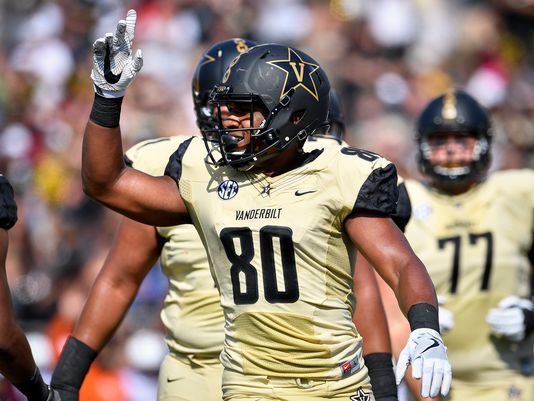