The Tennessee State Tigers were still flying high after last weekend. The Tigers were not supposed to beat the Georgia State Panthers in the eyes of many. The Panthers were opening up their new stadium and the Tigers were supposed to be the sacrificial lambs. Little did Georgia State know that Tennessee State came to play and came to win. The Tigers would upset the Panthers and ride into the Southern Heritage Classic on an emotional high. The opponent, as usual, in the Southern Heritage Classic was the Jackson State Tigers. After getting whalopped by the TCU Hornfrogs, Jackson State was looking to get on the board with a win and more importantly, were looking to avenge their 35-25 loss from last season's Southern Heritage Classic versus TSU. Well, the game was tight, but in the end, Tennessee State turned away Jackson State on a two-point conversion and TSU hung on to win 17-15. While it was not as impressive a win as TSU may have wanted, it still counts in the win column for them as they continue to surge strong out of the gates. Last game was about the defense and playmaking of quarterback Treon Harris but this one was about the defense and the play of senior wide receiver Patrick Smith.

Although Treon Harris has been a playmaker for TSU's offense, the offense has not put up a ton of points for the TSU defense. For any other team, that could be an issue, but for this TSU defense, it has not been a problem at all. Versus Georgia State, they held the Panthers to three points for majority of the game. That type of defensive performance was unheard of since they were a FBS school taking on a FCS school. Against the Jackson State offense, TSU showed that their performance was not a one-time thing. They essentially shut down Jackson State and if it were not for a late kickoff return for a touchdown, the game would not even have been as close as it was. The Tigers defense has been phenomenal and showed what they were made of. The discipline and the speed with which they play overwhelmed Jackson State and they were never able to get it together to even make things interesting. If their defense continues to play the way it has, the Tigers should have a good chance to be in every game they play.

The defense was the star of the game, but there was another star that showed up when Tennessee State needing him most. Wide receiver Patrick Smith seems like he has been at TSU forever. The redshirt senior wide receiver had big things expected from him this year, as he was named the OVC Preseason Offensive Player of the Year. The talented senior did well in the first game, catching six passes for 70 yards. Smith, while returning home to Memphis, got to leave one last mark there as a member of the TSU football team. TSU was up 10-9 late in the fourth quarter when Smith received a punt from Jackson State. The result of that punt Smith received was a 56 yard punt return that gave TSU an eight-point lead at the time. That special teams play by Smith had perfect timing for TSU, who was struggling offensively to close out the game.

TSU is tentatively scheduled to take on Florida A&M next (depending on the weather from hurricane damage in Florida). Like the previous games, this one will be on the road and will be the third of four straight road games to start the season. Some may wonder if they can get it done, but if you have watched the season they have had so far, the Tigers have shown grit, determination and have found ways to win games despite not putting up a ton of points. Don't count out the Tigers in any shape, form or fashion. 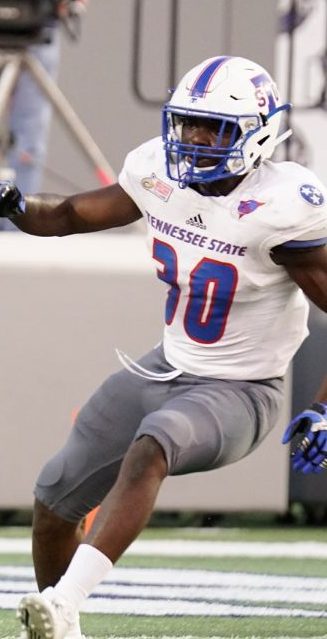