The Tennessee State Tigers entered Saturday undefeated. They opened up the season beating the Georgia State Panthers in their home stadium 17-10 and they followed up that unexpected win with a win against Jackson State in the Southern Heritage Classic. The Tigers continued their opening season road journey in Tampa, Florida against the Florida A&M Rattlers in yet another classic, the Tampa Classic. The Rattlers came in 1-1 on the season, with their lone win coming against Texas Southern to open the season. The Rattlers came out strong against the Tigers, taking a 6-3 lead in the second quarter. From there, the Tigers took over and scored three straight touchdowns as they seized control of the game. the Rattlers would score late to make the score more interesting, but the Tigers were just too much for the Rattlers as they won the game 24-13. The Tigers improved to 3-0 in the win and get ready to start Ohio Valley Conference play next week when they travel to Martin, Tn, in which will be their last road game of four-straight road games to start the season.

The defense of the Tigers, the strength of this team, was present yet again. Besides one drive in the first half, the Rattlers were pretty much stymied the entire game until the game was out of hand in the fourth quarter. The Rattlers were not able to establish anything on the ground, as they did not even reach 46 yards. As far as the passing game, the Rattlers starting quarterback, Ryan Stanley, ended the game with 216 yards passing and a touchdown. What wasn't told in those stats is that most of that yardage came when the game was already out of hand. The Tigers defense knew they had an advantage to come into this game. Their strength at all three levels defensively was more than overwhelming when it came to Florida A&M. Usually when that is the case, there can be a sense of a letdown from a team. Well, the Tigers essentially showed no mercy in handling business in a quick fashion and not allowing the Rattlers any hope when the game was still within reach for them. The only issue that came about in the entire game for the defense was an injury to their best defensive player. Senior Ebo Ogundeko injured his leg and was not able to return to the game. As of this point, there is no update on how long he could be gone or if he will be back this season.

The defense has been doing their thing, but there has been some issues with the offense. Last week versus Jackson State, the difference in the game was a punt return for a touchdown as the offense did not do as well. In this game, they took a little while to get going but they began to take control over an overmatched defense. The Tigers would score 21 straight points after being down 6-3 and essentially the game was over at that point. The offense showing some explosion was good, but what has to worry the Tigers a little is their starting quarterback. Junior Treon Harris left the game versus the Rattlers with an unspecified injury and there is not update as to how he is at this point in time. For the sake of Tennessee State, they better hope that Harris is ok. There was a reason they named him the starter this season and with his playmaking ability with his feet and his arm, the Tigers are more dangerous than they are with any other quarterback.

Head coach Rod Reed has done a great job keeping this team focused through being on the road every weekend so far and he has one more big road game to get them prepared for before they start their home slate. The Tennessee State Tigers head to Martin, Tennessee in a place that has not exactly been an easy place to play. The Skyhawks have been pesky each and every time these two have played, with the last few games going down to the wire. With the mental toughness the Tigers have shown so far, they should be ready to take on UT-Martin and handle business. But two things to watch during the week will be the health of Harris and Ogundeko. Losing both would be huge blows, especially going against a Skyhawks team that upset the fifteenth-ranked team in the FCS, Chattanooga. We shall see what happens and how their health is going into Saturday and the Ohio Valley Conference opener, but as for now, the Tigers are still handling business with a stingy defense and an offense led by an experience playmaker at quarterback. 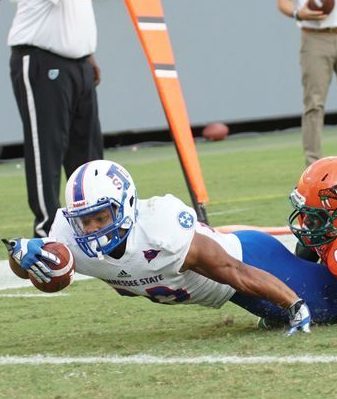