The Tennessee State Tigers had been rolling to start the season. They faced all three opening opponents on the road and for many teams, that would have been a daunting task. The Tigers handled it with ease as they won all three road games to start the season with airtight defense and just enough playmaking on special teams and with the offense. The Tigers had played so well that they fought their way into the FCS Top 25. Their reward for that: they had to head to their last of four straight road games to start the year versus another ranked team in the Ohio Valley Conference, the UT-Martin Skyhawks. The last time these two got together last season was for the Ohio Valley Conference opener for Tennessee State last season. The Skyhawks and Tigers met at Hale Stadium for a thiller last season and when the dust settled at the end of that one, the Tigers scored in the final seconds to win the game 34-30 . This year the Skyhawks got the Tigers on their home field and they definitely tried to make sure to leave less doubt. The Skyhawks got out to a 24-0 lead early in the game and survived a late Tennessee State rally to win the game 31-16.

The Tigers lost the game, but they most certainly have to be happy to come home. one other thing they have to be happy about is the play of their special teams in the last three games. Against the Jackson State Tigers in the Heritage Classic, the Tigers got a 56 yard punt return from senior Patrick Smith that would turn out to be the winning score. In the game against the Florida A&M Rattlers, field goal kicker Lane Clark made a 49 yard field goal and was 3/3 on extra-point attempts. And finally, in the game against UT-Martin, the Tigers got a 96 yard kickoff return from DeVon Johnson that would get them off the snide and into the scoring column after UT-Martin just went up 24-0. In three crucial phases, the Tigers have been solid. Going forward, they must continue to keep the emphasis on the special teams because you will never know when they come in handy. They can either help you win or they can cause you to lose and so far, the Tigers have been fortunate that they have helped them to a 3-1 start.

Special teams have been solid, but what happened to the Tigers defense Saturday versus UT-Martin was anything but solid. The Tigers allowed 24 points within the first 23 minutes of the game. At that point, their offense, which has been struggling to put up points, was behind the eight ball and the defense had put the Tigers offense in a position to have to come back to win a football game, which is what they have not done this season. The Tigers highest scoring game was 24 points and that was against a Florida A&M team that they were clearly better than. The problem the defense had was stopping the running game. Running back Ladarius Galloway had a good day, scoring two touchdowns while accumulating 90 yards on the ground. Early on, Galloway was gashing the Tigers right and left, doing whatever he wanted as the Skyhawks got out to a 24-0 lead. The Tigers would tighten up defensively as the game went on, but the damage had already been done. The Tigers made their run and got back to within eight at 24-16 in the fourth quarter, but a penalty-aided 49 yard drive all but finished the Tigers, as Galloway scored the last of his two touchdowns to ice away the game. The question now becomes was that performance of the defense something the Tigers are worried about or will it prove to be a blip on the radar screen? Only time and more games will tell as to which Tigers defense is the real one.

For the Tigers to come back home 3-1 after a four-game road trip to start the season is a good thing. The only bad thing about the one loss is it was a conference one to a very talented opponent. The Tigers get to play at Nissan Stadium this upcoming Saturday for the John Merritt Classic and that means familiar surroundings and lots of Tiger fans. Coming home is always a good feeling and it should be for the Tigers as they take on the Eastern Illinois Panthers. Should be a good game, but the corrections from last weekend definitely have to be made in order to stop the losing streak at one game. 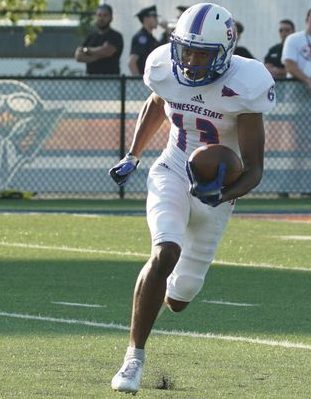