The Texan Longhorns were in need of a coach three years ago. The school and their boosters had decided that Mack Brown's time had passed. And despite leading them to a title while there, the school was plotting to get him out of there. That plan eventually worked and Brown was out as the Longhorns head coach. And with that, Texas was looking for their new head man. There were names mentioned like former LSU coach Les Miles and Alabama head coach Nick Saban. But in the end, there was one man that ended up getting the position. His name: Charlie Strong. At that point in time, Strong had the University of Louisville rolling and headed towards being a national power. And with what he had done at Louisville, that excited Texas enough to make him their head man. The thinking was that he would eventually get it turned around down there. But after three seasons and what Texas deems as no progress, it appears Texas is ready to move on. There are multiple reports that have been mentioned that say that Charlie Strong is out as the head coach in Texas. But there is one issue: no one has told Charlie.

According to reports, the Texas brass has been talking to everyone except Charlie Strong about him being fired. He has said that he has not been told so, but we all know that it is coming. And if we thought the firing then not-firing of LSU coach Les Miles last season was handled bad, then this one has been handled catastrophically bad. You would think that the Texas brass would respect the head coach enough that they would let him know he was not going to be returning. But the way they are going about firing him shows that they have no respect for him. And the question is had they ever had any respect for him at all? We know there were plenty that did not want him there to begin with and the poor performance of the team gives them ample reason to get Charlie out of there as soon as possible. This dismissal wreaks of the boosters making the decision to want to pay Strong his $10 million buyout instead of allowing him another season to coach the Longhorns. But this move was not only about Strong, but about another coach in the Lone Star state.

Tom Herman is currently the head coach of the University of Houston. And as soon as he got there in 2015, he has been putting up an impressive run in terms of winning. The Cougars have gone 22-3 under his leadership in two years and he is one of the big names across college football right now. So if Texas is going to get him, they are going to have some competition. Oregon and LSU are just two schools that they could be bidding against should he decide to leave Houston, which seems like everyone is waiting for him to do so. So let's just say that Texas swings and misses on getting Herman.. If that happens, then look for them to be in a little bit of scramble mode. Les Miles is still out there and they could make a run at him. Les is a national title-winning coach that has fielded teams that have been in the national title hunt year after year. The only problem with hiring Les is that they have to sell him to the boosters, which could be an issue. Those boosters may have seen the underachieving that some of Les' teams did at LSU and the offense isn't exactly one that has been aesthetically pleasing. Now if they whiff on both, then that is where Texas could really be in trouble. And at that point, they would be grasping to try and pull someone from where they currently are.

This whole scenario seems like one that could have been handled better than what it has been. And for Texas, it seems the boosters have more control than the actual school does itself. When that sort of thing starts happening, that is when a school has some problems unfortunately. And the reality is that some of the boosters still see Texas as a great job. The state is rich in talent and Texas should be better. But Texas is one of those jobs that seems like it controlled by the boosters who think Texas is a better job than what it currently is. Now they may end up getting someone that is worlds better than Charlie Strong. But Strong deserved better treatment than what he is currently getting from Texas. And for that, they should be ashamed of themselves. 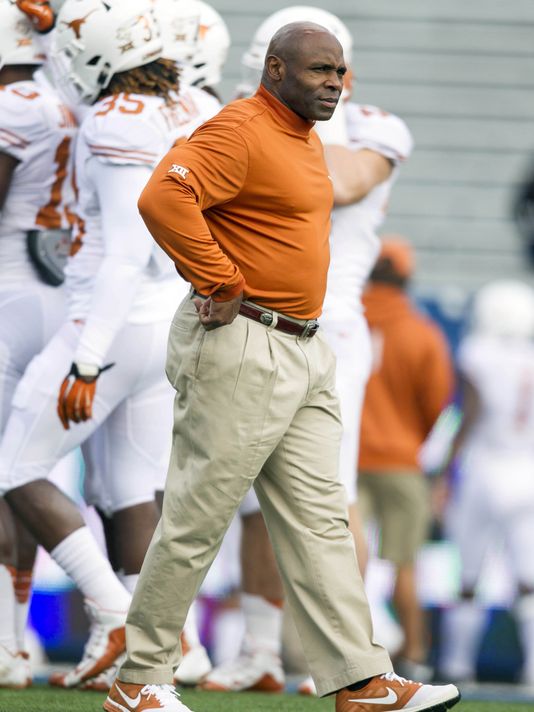