It Was A Tale Of Two Halves For Tennessee

The Tennessee Vols have been that team that no one can figure out. Before the season, everyone was speaking on the talent that they had and what they could potentially do. But after their first three games, they were considered a team that was overrated by some and underachieving by others. Well, heading into their game Saturday against the University Of Florida, questions were needing to be answered by them along with them exorcising their demons against the Gators. The last time they had won a game against Florida was 2004. And after the sting of snatching defeat from the jaws of victory last season, the Vols were especially motivated to make it happen this season. But of course, they could not do it the easy way. They were down as much as 21-0 in the first half and plenty thought they were done. But then the Vols rattled off thirty-eight straight points in route to their 38-28 comeback win. And just like that, all the doom in gloom that was present in the first half turned into tears of joy and shouts of exuberance. But what happened to make this improbable comeback happen for Tennessee?

The Vols offensively are powered by senior quarterback Joshua Dobbs. It always seems that if he is playing well, the Vols are very good offensively. And the opposite can be said if he is playing bad. Well, in the first half, many wondered what he was doing back there. He was not exactly the most comfortable throwing the football. And although some of the throws were on the money and dropped, there were other throws that were not anywhere near being on target. Along with his lackluster passing performance in the first half, the running game was not working for him either, as the Gators were all over him for the most part. And even to begin the second half, Dobbs left us all wondering when or if he would show up, especially after he threw his second interception of the game. But after that, it seemed like Dobbs sensed the desperation and decided to take over. Dobbs was running with purpose, breaking through tackles and eluding would-be tacklers on his way to nice gains. But with his passing game is where Dobbs really took off. He threw four touchdowns in the second half, including a 67 yard touchdown pass to wide receiver Jauan Jennings, which gave the Vols their first lead of the game. The Vols would go on to score 35 points in the second half and totally shock the Gators defense. If Dobbs is able to pass and run like that, then Tennessee will be a dangerous team. The only question is whether we can get any consistency from Dobbs and the rest of the offense.

But not only was the offense sleepwalking through the first half, so was the defense. In the first half, it seemed like Tennessee was playing a little passive. And as a result, the Gators looked like the more physical team, ripping off five-yard runs at will and having all day to throw the football. Not only were the Vols getting beat up front, but their starting defensive backs were getting torched. The Gators took and connected on a few deep shots, attacking cornerback Justin Martin (who started in place of injured star cornerback Cam Sutton) and Emmanuel Moseley. Antonio Callaway and the Gators owned them in the first half. But after halftime, the adjustments the Vols made showed. Instead of the Gators owning the line of scrimmage, it seemed like the Vols created a new line of scrimmage in the backfield of Florida. Plenty of running plays either went for no yards, little yardage or were losses. And along with the presence in stopping the run, the pass rush began to pick up. Vols defensive coordinator Bob Shoop began to bring different people from different angles along with having his front four play better. The result was Florida quarterback Austin Appleby not having a ton of time to get passes off. And with that pressure up front, the Tennessee secondary was able to settle in and just make plays without the threat of Appleby having time to beat them deep. The combination of the pressure and the assignment football spelled doom for the Gators in the second half, as they only were able to score seven points after intermission.

The Vols were able to prevail and end their eleven year losing streak to the Florida Gators. But in doing so, they made the fans of Tennessee ride an emotional wave of dejection and then joy. But eventually, the Vols have to get more consistent. This type of play is not something that they can continue to do over and over again. And hopefully for them, this is a stepping stone towards more consistency. But for one weekend, they can breathe a little easy. Up next for them is the University of Georgia and given what happened to them, the Bulldogs will be ready. So the Vols better be ready and prepared from the jump next week. 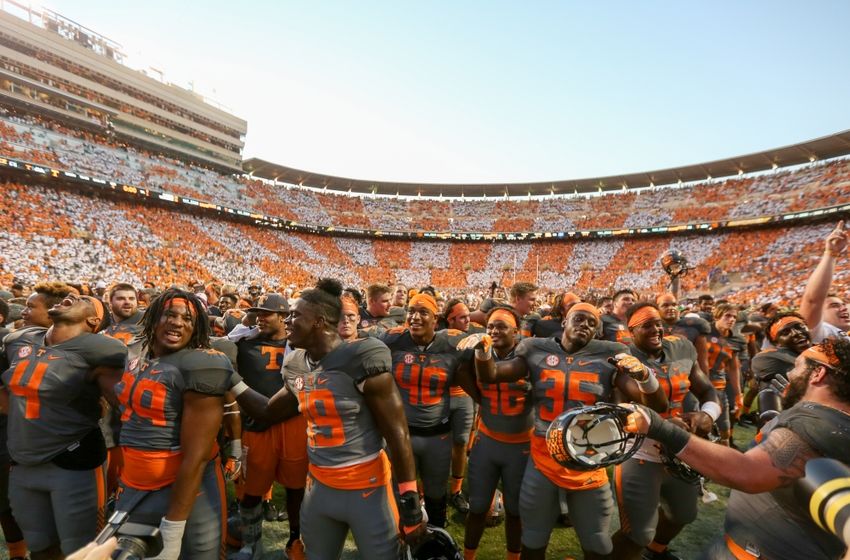