What Are The Tennessee Vols?

The University of Tennessee was undefeated heading into their matchup this past Saturday with the Georgia Bulldogs. They were riding the confidence of their comeback win against Florida and many thought they would go into the game and win with ease. But with this Tennessee team, there's nothing that gets done easy. They were down 17-0 before coming back and taking the lead 28-24 on a strip sack and recovery in the end zone by the defense and all they had to do was hold on to the lead at the end of the fourth quarter on a last-minute drive. But that did not happen as the Vols Malik Foreman was beaten deep by Georgia's Riley Ridley on a 47 yard touchdown pass with ten seconds left. And with that, all Tennessee fans thought the game was over. The undefeated season lost just like that or was it? Georgia received a 15 yard celebration penalty on the touchdown because Bulldogs defensive back Rico McGraw came on the field to celebrate without a helmet on. Then with the return of Evan Berry of the kickoff to near midfield, the Vols got even more field position. And with the Bulldogs being offsides, the Vols got an additional five yards that set them up at the 43 yard line. And from there, this magical play happened:

And with that, the Vols found a way to win and their Hail Mary was answered.

The win by the Vols in exciting fashion sets up a huge showdown with the Texas A&M Aggies next weekend. But in doing so, people now have gotten to see what team you will be seeing all year from Tennessee. The Vols, just like in all but one of their games, got behind early. For whatever reason, the Vols never come out to play early in games. The defense looks a little lethargic at first. Opposing offenses come out and are able to run and throw the ball without facing much resistance at all. And as far as the Vols' offense, they seem to be sleepwalking through first halves with regularity. The offensive line is shaky at best in the first halves and that permeates throughout the rest of the offense. The result of that lethargic play to start games usually is a deficit to come back from. And at that point, the Vols have many of their fans ready to lose their minds because they cannot grasp what is going on with their team. But when they get down, it seems like that's when they start to find their groove.

The Vols have been fortunate enough to come back from the deficits they have faced this year. It seems that their focus picks up when they are down and they become the team that everyone expected them to be when in tough situations. Whether it be the sense of urgency picking up or the speeches by the coaches, the team just seems to flip that switch that takes their intensity up to another level. But what happens when the Vols face a team where they cannot play sporadically on? That's a question Tennessee coaches may want to pose to their team this week as they prepare for a tough two-game stretch against Texas A&M and Alabama. If they come out the way they have started games, they could potentially get embarrassed on national television and be 5-2 in two weeks. But if they come out playing like they have when they are down, then the Vols could win one if not both of their games in the next two weeks.

The next two weeks will tell a lot about the Vols and where they plan to go this year. If they want to make the playoffs, then they need to show up like they have when down at all times. If not, then the buzz surrounding them could die down in a couple weeks. All of what happens is up to the Vols. Which team will show up next Saturday is still in question. For Tennessee fans, they better hope the one that shows up when they are facing a deficit comes out to play. That version of the Vols shows up with a sense of urgency and a passion to play the game. 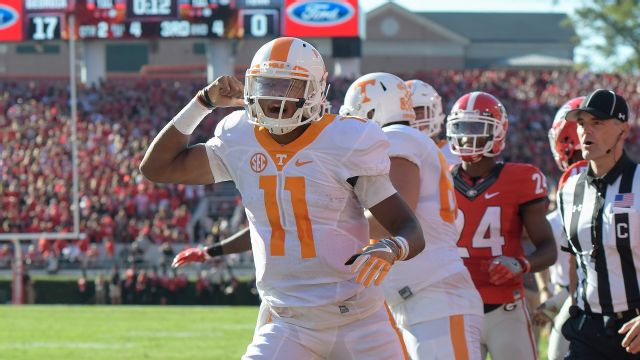