Questions The Vols Needs To Answer

No one knew what to make of the Tennessee Volunteers before their opener last week. There were tons of questions and not a lot of people that had any answers until Labor Day weekend. Well, after a rousing 42-41 double-overtime win versus the Georgia Tech Yellow Jackets, the Vols had a few more answers for those questions that were lingering around their team. Going into their second game versus Indiana State, the Vols were expected to coast to a win. In the first half, it looked like a rout was coming, as the Vols were up 28-0 at the half. Instead of that beatdown continuing in the second half, the Vols scored two touchdowns and allowed Indiana State to score a touchdown in the second half as they ended up winning but not as impressively as some might thought they would. The Vols got some clarity on some things while more questions arose as well.

One of the unquestioned things up to this point is who the quarterback of this team is. All spring long there was a battle as to who was going to be the starting quarterback. Was it going to be Quinten Dormady or would redshirt freshman Jarrett Guarantano? Well, Dormady ended up beating Guarantano out for the starting job although there were many that wanted Guarantano to get the position. Over the first two games of Dormady starting, the pattern that has been established is slow starts and then him heating up in games. While some may not like that, the team responds to it well so far. Along with the team's response to Dormady, the Vols finally let everyone see what Guarantano could do and his performance against Indiana State showed that he is not quite ready yet. So while some will want to question the decision, Dormady will be the starting quarterback at Tennessee unless he completely messes something up or if the team just decides to go in a different direction.

Defensively, the Vols were not as good as they hoped they would be versus the Georgia Tech Yellow Jackets. They were ran all over and in some down and distance situations, the Vols defenders were not as aware as some would think they would be. Despite some of the mistakes that happened, the Vols were able to pull off the win with big plays by key players Rashaan Gaulden and Darrell Taylor. Going into this next game, the Vols faithful were looking for a dominant performance from their defense to quell some of the concerns. Well, the Vols did come out and hold the Sycamores down in the game. Indiana State did not score until the second half and that was helped by a turnover by the Tennessee offense in the third quarter. Other than that one venture into the endzone, the Sycamores did not really threaten the Vols at all. The Vols needed this type of performance and now they have some confidence heading into their next game at the Swamp.

While offensively and defensively some questions got answered, there are still some things that are still needing to be figured out. One thing offensively that needs some answers is the offensive line. The Vols only gave up one tackle for loss against Georgia Tech and did not look that bad at all. With the issues that Tennessee has had up front in the last couple of seasons, it was a breath of fresh air to see that. Then came the Indiana State game Saturday and then we saw flashes of what Tennessee fans saw last season and the season before that. The Vols gave up seven tackles for loss in that game versus the Sycamores and there has to be some concern creeping in the minds of the coaches and the fans of the team. No one knows which offensive line will show up after watching the first two games. Will it be the one that was there against Georgia Tech or will it be the one that showed up against Indiana State? Well, if it is the one that showed up against the Sycamores, then the Vols will have problems versus the Florida Gators.

Defensively, the Vols had a better showing against Indiana State than they did against the Georgia Tech Yellow Jackets, but there is still some concern about the run defense. The Yellow Jackets were running it at will against the Vols in their Triple Option offense as they accumulated over 500 yards rushing. In this past game versus Indiana State, the Vols were able to bring that total down to 122 yards rushing that they gave up. The difference was stark and was good for the Vols, but let's dive a little bit deeper into the numbers. The Vols only gave up 76 yards to Lemonte Booker, but he averaged 5.1 yards a carry. For any running back to average that many yards per carry against a defense is very concerning. If the Vols think Booker was scary, then take a look at the Florida offensive line and the stable of running backs they have at their disposal. Sure, Florida's offense did not look very good against Michigan, but that does not mean they cannot get better over the two weeks they have been off. The challenge to get better in that aspect falls squarely on the front seven of the Vols and especially junior defensive tackle Kahlil McKenzie. The talented big man was coveted by everyone when he chose the Vols as his college destination and he has not lived up to the hype so far. He has been solid, but the Vols need that superstar guy that he has the potential to be.

Even with the questions that are there, the Vols are still 2-0 and looking to go 3-0 this Saturday. With that being said, it is about that time the questions get answered and this Saturday is the perfect time to see if the Vols are capable of answering the doubts people have in them or not. The University of Florida is the place and The Swamp is the scene. It will be interesting to see how this team responds to the big game atmosphere. 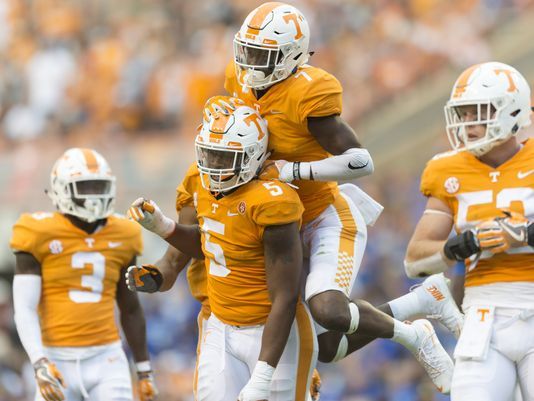