The Tennessee Vols were heading into another big matchup again this past weekend. They squeaked by a winless University Of Massachusetts team the previous week and after that concern was kicking in. When fans started to think on them facing the University of Georgia, then sirens started going off. The Bulldogs have been dominating defensively in all the matchups they have had and Tennessee was next on the list. Couple their good play with them wanting to revenge against Tennessee for the Hail Mary last year and you could see why the Bulldogs were fired up for this game. Tennessee never could get into the game as Georgia ending up running away from Vols 41-0. The loss was one of the worst losses in the Butch Jones era at Tennessee. Along with that loss being very embarrassing, it only fueled the talk of Butch Jones not being the man for the job at Tennessee. While that issue will be talked about more down the line, the issue at hand with this team has to do with the play on the field as well.

Offensively, the only weapon that has been consistent for the Vols has been running back John Kelly. The junior from Michigan has been explosive in the running game, running through and around players with his dazzling footwork and amazing balance. He has been the bright spot that has been there every single game. So far into junior quarterback Quinten Dormady's career as a starter at Tennessee, he has not been very impressive at all. You would think he would have been more polished at this point in his career since he has been in the offense for three seasons, but he has not so far. His inexperience has shown and at times when he is really needed, he has not shown up. Along with his inexperience as a starter, he is just limited as a player in that offense. When the Tennessee offense was clicking the last few seasons, the quarterback they had was mobile and could throw the football. Josh Dobbs was the perfect fit for that offense and helped others flourish because of the threat of him running the football. Now with Dormady there, the Vols are more predictable. They know Dormady is not running the football when they run their quarterback read and it makes things tougher for the offense to do anything. The suggestion here should be to do to the freshman Jarrett Guarantano. The redshirt freshman quarterback is a dual-threat quarterback that can open the offense up and make things easier for not only Kelly but the wide receivers. And to be honest, at this point a junior quarterback is going to be who he is going to be. The freshman has much more potential to grow into a star than he does.

Defensively, when Bob Shoop was hired by the University of Tennessee, he was supposed to take the defense to another level. He had all the pieces and despite injuries to players, the Vols still had enough to make some things happen. Well, last season they just did not look very solid the entire time he was coaching them. Those improvements did not lead them to look any better. Sure, there was Derek Barnett out there causing havoc with the team, but there was nothing else that you could say was consistent about them at all except for the knack for making plays in clutch times for the most part (who can forget that chasedown strip from Malik Foreman last season versus Texas A&M). Coming into this season, the Vols lost some key players defensively but still were expected to be better in Shoop's system this season. Well, so far the results are definitely inconclusive. The Vols have made some plays and were solid to start the game versus the University of Georgia. As the game wore on, the Bulldogs were doing any and everything they wanted during the game. Part of that is because the Vols defense had been on the field most of the game, but with the depth that they have, they still should have been able to make more things happen than they did. The change to Shoop as defensive coordinator has really amounted to nothing so far and counts once again as something against Butch Jones and his era at Tennessee.

The Vols don't look so good now and the heat is definitely on them right now. Things certainly will not calm down at this point as the Vols still have to see Alabama this season and that does not look promising at this point. The offense needs a jump start so why not go with the youngster and as far as defensively, the wizardry Shoop was supposed to bring has not been seen consistently. The Vols have some issues and unfortunately those issues don't look like they will get any better at this point in time. 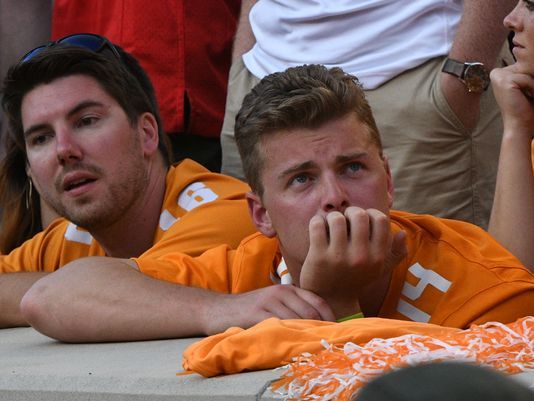