The Tennessee Vols entered this season as an unknown. They lost their top receiver, running back and quarterback from last season offensively. Defensively, they lost their leading defensive lineman, leading linebacker and their leading cornerback. The Vols had a lot of questions to answer going into their first game. To top it all off, they were facing a Georgia Tech team that runs the Triple Option, which is one of the hardest offenses to defend consistently for an entire game. Well, the Vols got down 14 points late in the fourth quarter, but found a way to come back and tie the game. And after leaving one overtime tied, the Vols were able to score and then stop the Yellow Jackets on their two-point conversion to win the game. The Vols reminded their fans that the rollercoaster ride from last year still existed in 2017 as they sent their fans through a gambit of emotions on the way to the win. This was definitely an interesting win for the Vols and many will criticize them for how they won the game. Even though there are some that can question the win in this game, you cannot question that Tennessee saw some new playmakers emerge in this game.

Offensively, no one knew what to expect from the Vols. Junior quarterback Quinten Dormady was making his first start as a Vol, replacing longtime starter Josh Dobbs. While he was under some pressure to perform, the bigger amount of pressure was on the playmakers that were supposed to be the wide receivers and the running backs. Well, one guy that showed up again was running back John Kelly. The talented junior showed what he could do last season and he picked up where he left off to start this game, running with reckless abandon and power when he was given the football. He would end the game with 19 carries for 128 yards and four touchdowns. That type of production will help any quarterback settle in and when the Vols decided to use him more in the second half, that is when Dormady began to play better.

Dormady began to turn it on in the second half, throwing for more than 200 yards. One guy that was expected to get a lot of those passes thrown his way this year was junior wide receiver Jauan Jennings. He was the leading returning player for the Vols at the wide receiver position and it was his group to lead from all accounts. Unfortunately he went out with an undisclosed injury in the second quarter and never came back. While that seemed bad for them at the time, the Vols ended up finding out about one of their unknown receivers, Marquez Callaway. The talented receiver stepped up and became a guy that Dormady could trust in the passing game, as evidenced by his huge catch when Dormady threw the football up for grabs and Callaway went up and caught it. Sure, it is only one game, but he showed the urgency and the desire to get it done in this game.

Offense definitely had it's bright spots, but so did the defense as well. Of course when you give up over 500 yards on the ground and make Georgia Tech quarterback TaQuon Marshall look like the second coming of Joe Hamilton, people are not going to have great thoughts on you. With that being said, there was a couple bright spots on the team on Monday night. One guy that leaped off the page to start this game was Daniel Bituli. Tennessee defensive coordinator John Shoop was on record for not being sure if Bituli was ready to play for Tennessee in the SEC. Well, he surely answered that question from his defensive coordinator, making 23 total tackles and flying all over the field all night long. He missed some tackles during the game and could have had 30 if he didn't, but he was definitely playing hard and playing to win. The smaller mistakes he made tonight does need to be cleaned up along with him being able to go longer in games.

Bituli was good, but he was not the only young player that we truly got a chance to see under the bright lights and the bigtime. Sophomore defensive end Darrell Taylor entered the University of Tennessee knowing that he would need to add some bulk to his slinder frame. After a little bit of time adding that weight, the Vols turned him loose on the Yellow Jackets to great results. Taylor ended the game with 12 tackles against the Yellow Jackets along with constant pressure and great effort plays. No play highlights his effort on Monday night than the last play to win the game. Taylor fought off two blocks to get to Marshall and tackle him, preserving a one-point win. Taylor was especially good for the Vols and became a guy that got many Vols fans excited over the future and what he can bring. Also, remember that he was doing all this with a cast on his left hand.

The Vols won the game in an unimpressive fashion to many, but in that, they discovered a few playmakers and potential leaders down the line. As the season goes on, it will be interesting to see if the Vols  have learned their lesson or if they will be the Heart Attack special they were last year for their fans. Right now, those questions may be premature, but what we do know if that these four gentlemen mentioned could have a huge hand in how the Vols do this season. 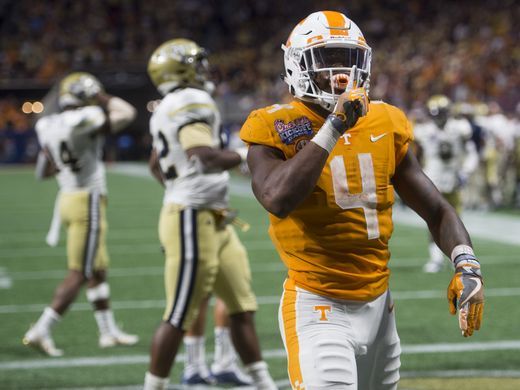