What Will People Remember Most About Joshua Dobbs?

The Tennessee Volunteers had their last home game this past weekend versus the Missouri Tigers. And while there were many seniors recognized, there was one that stood out the most. When quarterback Joshua Dobbs was coming out of high school, he was committed to Arizona State and seemed to be headed there for college. But when Butch Jones and his staff were hired at Tennessee, all that changed. And before National Signing Day, Jones was able to flip Dobbs from heading out to Arizona State to coming to Knoxville, Tennessee. And with that, Jones bolstered his first class at Tennessee. Now Dobbs did not come in as a guy with the highest acclaim in that class at that position. That title belonged to Riley Ferguson. But after some injuries and transfers at the quarterback position, Dobbs finally got his shot in his sophomore season to start for Tennessee. And from there, he has been holding down the position and leading the Volunteers on the field. Over his time being the starter, the team has gotten better and better. But unfortunately for him, he has not received the love for what he has done for the Tennessee program on the field. And going into his last regular season game at Tennessee, there are some mixed reviews out there for him. So what things will Dobbs be remembered for at Rocky Top?

The one thing that you can never really question about Dobbs is his athletic ability. Dobbs and his legs have made some excellent plays over his tenure at Tennessee. Just check out the athletic plays he has made:

The threat of him running the football has caused plenty of teams headaches and made him the perfect fit for Butch Jones' offense. And because you have to respect the threat of him running the football, he has helped make Tennessee a team that has to be respected in the running game. Over his time at Tennessee, that running game has been something the team has leaned on. And not only does his athletic ability help in the running game, but it has also helped him make plays when things break down. Time and time again, you can see him scrambling around and making defenders look silly. And even though teams knew this was possible, they still could not stop it consistently.

Dobbs' athletic ability helped make the Vols better offensively during his time there, but so did the way he handled himself. In a sport where players can get carried away emotionally on the field and lose their cool, Dobbs was as cool, calm and collected at all times. Whether Tennessee was down or up in a game, you could not tell by the demeanor of Dobbs on the field and on the sideline. That calm demeanor helped the Vols stay focused during some rough times during his time there. And along with keeping them calm during the rough times and stretches of play, he also was able to keep them settled during the best times. A perfect example of him keeping his demeanor in both aspects is the Florida game this season. The Vols were down huge at halftime and they were not playing as well as many thought they should be. But instead of getting frustrated, Dobbs stayed calm and stayed the course. And eventually the Vols woke up and came back to win the game. All the while, Dobbs stayed calm and led them back, never getting too high or too low on the field.

Dobbs will definitely be remembered for his athletic ability and demeanor on the field, but what he will be most criticized for is his inaccuracy in the passing game. Over his career at Tennessee, there has been some big throws that Dobbs has made. And he and wide receivers Jauan Jennings and Josh Malone have made some excellent plays in the passing game over his time at Tennessee. But while the deep ball has been something he has been successful on at times, it is the intermediate to short routes that he has been pretty bad at. Over his time, you would think that he would have developed that portion of his game. And because of that part not developing, there are some that think he never really reached his potential as a player. And lack of reaching his potential is something that some fans of Tennessee believe helped hold back this offense. The inaccuracy at times also had many calling for him to be benched at times as well. No matter how well he has done at Tennessee in terms of record and running the football, there will be some that will never forgive him for not improving throwing the intermediate to short routes better than he does.

Joshua Dobbs will go down as one of those quarterbacks at Tennessee that will never get the respect he deserves. While it is true that he did not win an SEC title or a national title, he did beat Florida, beat Georgia twice and helped lead the Volunteers back to respectability in the SEC East. But all that some will harp on is who he did not beat and what he did not do during his time. Dobbs came to Tennessee during a tough time in the program. And whether folks want to accept it or not, he has come in and left the program in better shape than when he arrived. 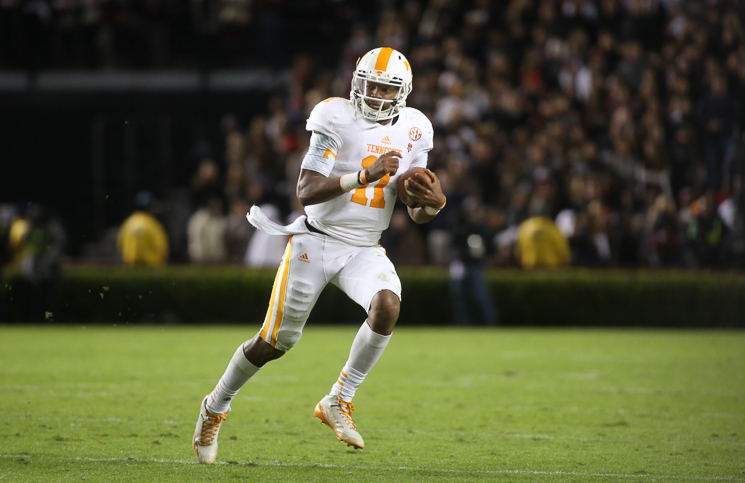