Tennessee State Has A Quarterback Issue

The Tennessee State Tigers opened the season 3-0 and winning ballgames with good defense and timely offensive or special teams plays. Well, all that good fortune was not enough when the Tigers headed to UT-Martin for their first OVC game of the year. The Tigers lost the game 31-16 and that halted their three-game season-opening winning streak. Coming into this past week, the Tigers were looking to bounce back as they hosted the John Merritt Classic, named after legendary Tennessee State coach John Merritt. The game usually opens the season, but it dipped to the fifth game of the season due to scheduling. Well, in a game that usually is one that they win, the Tigers had to take on Eastern Illinois, a team that is traditionally pretty tough in the OVC. Well, the Tigers battled but unfortunately were not able to win the game, losing in double-overtime 19-16 as the Panthers scored a touchdown in double overtime to win the game. The Tigers defense played well enough to win the game, holding the Panthers to 10 points through four quarters. While that was good, what was not good is the offense was not able to score more than 10 points in regulation. The Tigers may not want to realize right now, but they have a situation that needs to be worked out on the offensive side of the ball and it starts with the quarterback play.

Coming into the season, the Tigers had a quarterback battle going on with Florida transfer Treon Harris and O'Shay Ackerman-Carter, who was assumed to be the incumbent at quarterback since he was going to return from his season-ending knee injury last season. Well, things did not work out for Ackerman-Carter and Harris was named the starter. Bringing in that SEC pedigree at quarterback was looked to be something good for the Tigers and Harris has brought some good things to their offense. His scrambling on third downs has netted them some good things and his movement in general has gotten them some yardage that they otherwise may have not gotten. While all that may be good for their offense, what is not good for the Tigers offense is his effect on the offense in terms of the passing game. For example, the passing game Saturday versus the Panthers was out of rhythm under Harris. He would seem to pull the football down to soon instead of letting the play develop and let his receivers work for him. The result of that has been stalled offense at times and that is something that will not win you ballgames.

While Harris is a talented quarterback, the Tigers seem to be stagnant under his leadership. The other option at quarterback has a different feeling about him. Sophomore quarterback Michael Hughes certainly looks different than Harris. He is taller and not quite the runner that Harris is. He has not had much playing time this season unless Harris has been hurt or dinged up, but when he has gotten into the game, he has looked solid and has more importantly looked solid in the passing game. When he enters the game, the timing of the passing game seems to be better. The ball comes out on time and accurate for the most part(missed a couple deep throws against Eastern Illinois but he threw it where only his guy could catch it). Just to give you an example of Hughes and the way he can pass the football, let's check out the passing stats that he and Harris had. Harris accumulated 119 passing yards over the time that he played, which was roughly a little over three quarters of playing time. Hughes came in when Harris got dinged up and continued to play. He actually had 76 passing yards with less than a quarter worth of playing time. That right there should tell you something about the comfort level the Tigers have with him in the passing game. While those stats favor Hughes, what doesn't favor Hughes is he has the propensity to hold on to the football too long. That issue showed up when he was sacked while trying to get rid of the football late on a potential game-winning drive. If at that point he does not see anyone open, he has to get rid of that one. Instead, he got sacked and fumbled the football to the Panthers.

The Tigers fell to 0-2 but there is definitely not much you can put on the shoulders of the defense. The offense has produced over 20 points only once this season and for a team that was potent offensively last season, that is not a good sign. The defense has more than held up their part of the bargain and it is time for the offense to hold up theirs, whether that means a quarterback change or usage of both quarterbacks. We shall see what happens when the Tigers play Saturday at Eastern Kentucky. 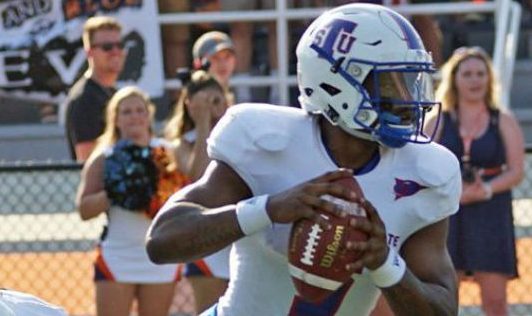