And Then There Were Four

The college football has been one of ups and downs. There were teams that many expected a bunch out of and others that no one saw coming. And finally, we are down to the College Football playoffs. To start the season, everyone had Alabama in the playoffs already. And true to form, the Crimson Tide handled everyone on their schedule with relative ease. But the other three teams, well, that was in doubt in the last few weeks. Washington, Michigan, Ohio State, Penn State and Clemson were among the teams that were jostling for those last three spots in the playoffs. As time went by, the other three teams made themselves evident. And on Sunday, the teams that made the four-team playoffs were announced. Those other three teams were Clemson, Ohio State and Washington, leaving Michigan and Penn State out of the party. Both will still be going to bigtime bowl games, but both surely wanted to be in the hunt for the national title. And with these teams being left out, of course there are some that are not happy. The biggest complain seems to be in regards to Penn State not making it in.

For those that are not familiar, Penn State just recently won the Big Ten Championship game versus Wisconsin. Notice that Ohio State and Michigan were not in that game at all. The reason that Penn State was in there was because they beat Ohio State at home this year while Michigan lost to Ohio State and Iowa. So with that being said, the Big Ten champion was left out and it made some wonder the validity of the teams in the Final Four. But even with winning that conference championship, there was very little chance the Buckeyes were not making the Final Four for Penn State to make it. But those that are wanting Penn State to make it and were upset that they did not may want to take the names off both teams and compare the schedules. Ohio State had one loss this season. They played tough all year long and lost to Penn State in Happy Valley on a blocked field goal that they took back for a touchdown. Other than that, the Buckeyes may have had a perfect season. Now that we have viewed Ohio State's record and their lone loss, let's take a look at Penn State. The Nittany Lions were a little rocky at one point this season, but they ended up righting the ship and only had one loss in the Big Ten and that was a beatdown to the hands of Michigan 49-10. But outside of the Big Ten, the Nittany Lions had one other loss that people seem to forget about. Anyone remember what happened on September 10, 2016? That was the day that Penn State played against Pittsburgh. And that was also the day that Penn State lost 42-39 to a team that would eventually go 8-4 on the season. Who really was going to take Penn State over Ohio State with that loss on the docket?

As far as Washington, they lost to USC and everyone was on their case about it. They talked about the schedule and some of the teams that they played. And to be fair, they did play one team that was not even supposed to be on the same field with them (Portland State). But it isn't like Penn State did not play a patsy as well in Kent State. The only difference in these two teams is that Kent State was on a different level then they were (Portland State is an FCS school compared to FBS school Kent State). And the other factor is they lost one game to a ranked team. There was essentially no way that Washington was going to be left out if they won out after their loss to the USC Trojans. And if they were going to be left out, then there would seriously be some questions as to what was going on with the committee. But either way it went, there was going to be some questions from teams that felt they should have made it. This decision may not fall in the favor of Penn State, but this is just the way things go. The body of work and those things are fine to go by, but we all knew that a two-loss Penn State team wasn't going to the playoffs with two losses over Washington and Ohio State. And that is exactly the way it played out.

In looking at all four of these teams that are there, it will be Alabama's championship to lose in the eyes of many. And quite honestly, it really might not even matter if Penn State made it or not. But in the end, Penn State only has themselves to blame for not making it. And at this point, they will be in for a good game against the USC Trojans in the Rose Bowl. But like Penn State head coach James Franklin said, whatever happens to them, they will accept and be happy with it. Penn State had a better season than many expected, but it was just not good enough to get them in the Final Four. 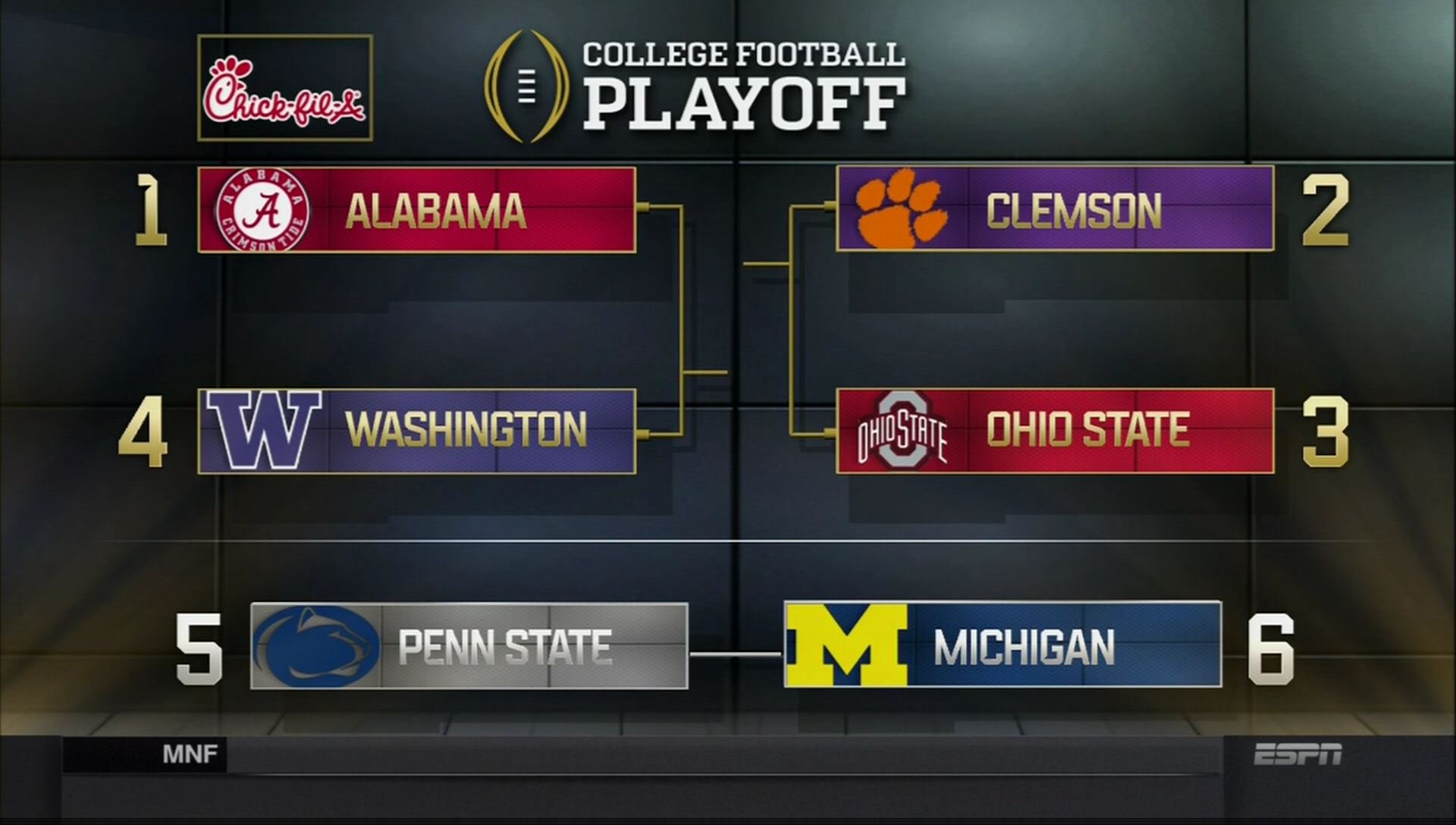