Deshaun Watson Is Easily The Best Quarterback In College Football

Coming into last season, the Clemson Tigers were thought to be a good team, but not a great team. They had a solid defense and they had a guy that many liked at quarterback in Deshaun Watson. Many expected them to have their usual season of ten wins and lose a game that no one expected them to. But to those that thought that, you were wrong. Clemson went undefeated in the regular season (of course they had a scare or two) and made it to the National semifinals. And from there, they won and entered the National Title game against Alabama. Some had Alabama boatracing Clemson while others believed Clemson would keep the game close or win the game. Well, Alabama was able to pull the game out, but they did so after surviving the onslaught of Watson. The redshirt sophomore may have lost the game, but he sure put on a show. He dazzled the Crimson Tide with his feet and he also showed them that he could make some throws in some tight spaces on his way to a setting a national championship record for total yards with 478. But that was not the only game that Watson had that was spectacular, as he pushed himself into the Heisman trophy race. He ultimately lost it, but he will definitely be in it again this season. And of course he has now positioned himself as the best quarterback in college football. And it is not even close.

Watson was coming off an injury heading into last season and many were not sure how he would be mentally and physically. Well, he showed that he was over the physical part quickly when he was running the football (ran for over 1,000 yards and scored 12 touchdowns on the ground). He runs with such ease and composure, getting out of bounds or getting on the ground when contract comes around. That type of ability is something that helps when the pocket breaks down. In the NFL, this skill will come in handy when a blitzer comes and there is no on there to pick him up. He is quick yet fast and has a good sense of where people are around him. But usually with quarterbacks that can run, there is the thought that they hold on to the football too long or miss open wide receivers in order to run the football. But that is not the case when it comes to Watson. He runs when he has to, but he trusts his wide receivers and always has his head up when outside the pocket, looking for wide receivers breaking down the field. And even when he is not scrambling to find anyone, he can sit in the pocket and make completions at all depths on the field (threw for 35 touchdowns and 4,104 yards with only 13 interceptions while having a completion percentage of 67.8%). His numbers last season were outstanding all the way across the board and that puts him up there as the number one quarterback in college football right now.

After Watson, there is a bunch of guys that have special talents but have something that makes pro scouts wonder. One of those guys is Miami's Brad Kaaya. Scouts love the cerebral game of Kaaya and the things he can do with the football. He also has command over his offense. But besides that, he also reduced his interceptions from twelve in his freshman year to five in his sophomore year. That seems good, but what is bad is that his touchdown passes reduced as well, from 26 to 16. Those skewed stats seem to tell me one thing: Kaaya was playing safe. In college you can get away with that a little bit more because of the difference between how people get open. But in the NFL, those windows are tighter to throw the football through. And if he can't let go of the ball at the collegiate level with bigger windows, then he could face trouble letting it go at the professional level. And in the NFL, it is a passing league now. With him holding on to the ball, that would make him more suited for a run-first team, which there are not very many of those in the NFL.

Another quarterback garnering some attention before the 2016 college football season is Ole Miss quarterback Chad Kelly. At one point, Kelly was at Clemson with Watson. But he got in trouble and got kicked out of the university. And after one year at a junior college, Kelly landed at Ole Miss with head coach Hugh Freeze. He got a second chance to play the game he loved and the nephew of former Bills star quarterback Jim Kelly took advantage of it. Kelly threw for over 4,000 yards, completed 65% of his passes and threw for 31 touchdowns while only having 13 interceptions. He was excellent for the Rebels as they were pretty solid last year with their 10-3 record. But with all the excellent things he did last season, he also had some moments where he can become a loose cannon at quarterback. And when he becomes that guy, there is no telling what he can do. Luckily for him it worked out for him more than it did not last season. But in the NFL, he cannot take those type of chances and honestly think he is going to get away with them. Even Willie Beamen had to learn to use his teammates more.

Kelly and Kaaya are two very talented quarterbacks, but they both have some questions marks that they have to answer this year. When it comes to Watson, he has less holes than either of them. As it stands, he is head and shoulders above any of them. And going into next season, he should be able to continue to build his case as the top quarterback in college football. It should be fun to see him dazzle the college football world once again as he prepares to get his millions in 2017. 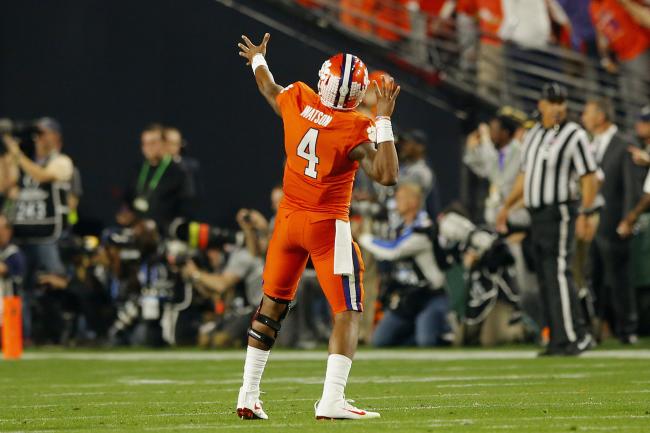