The kicker of a football team is someone that everyone knows when things go back like a missed kick or field goal that costs the team the game. Those same kickers can also be well-known for a game-winning kick or field goals as well. Donald De La Haye  has not kicked a game-winner nor has he missed a big kick, but he is known to a lot of people for what he does off the field and in front of the camera. Yes, De La Haye  is a star on YouTube and has been running his own YouTube page for a while. Along with running his page, De La Haye has also monetized his channel, making money to send back to his family in his home country. All of that seems like good things De La Haye is doing for himself and his family, but then the NCAA got involved. The governing body of college sports said that he must shut down his channel because he is making money off the channel he runs and they were supposedly concerned about amateurism. Well, De La Haye refused and not only did he refuse, but he talked about the situation on his YouTube page. Needless to say, he is not a member of the Knights football program anymore because he refused to do what was asked of him and the NCAA made him ineligible. While the rules are understood in what the NCAA says and wants, was this statement really needed by them?

Anyone who watches college sports notices the advertising that goes along with it. Commercial after commercial after commercial means more dollar flowing through the hands of the NCAA each and every year. Couple that with the exposure of all the events that happen in every single sport under the NCAA and you can only imagine the money that is made. With that being said, you have to wonder if the rules were the real reason the NCAA took De La Haye off the field. While everyone is still hung up on the fact that he made money and the NCAA wanted him to stop, let's take a look at what reasoning it really could be as to why the NCAA pulled the plug on De La Haye. We all know that the NCAA is making money hand over fist at this point. But the thing is, they are not really making any money off De La Haye and what he is doing with his YouTube page. If the NCAA was making money off of him, then I think things would go a little differently in his situation. He may not have been ruled ineligible for college football this season and the NCAA would be getting their cut. On the flipside, he would not be able to send as much money as he is back to his parents with the NCAA all in his pockets. So in light of that, De La Haye may have still had to make a decision in his football-playing future because of the NCAA and their actions to get some of his profit.

This, like other things, shows you just how petty the NCAA can be. They can make money off players as much as they want to but the players cannot capitalize on what they do and what they provide the NCAA. This ruling may be within the NCAA rules, but it shows that the NCAA is not willing to share. They are making millions and billions of dollars each and every single year. Even with those millions and billions they are making, the NCAA is still not giving the product they use and abuse any cut of the funds. The NCAA comes out looking like the bad guy yet again on this matter and with that being said, the NCAA needs to revamp it's rules. Maybe De La Haye would have thought differently about his situation if he got a stipend or a cut of the money the NCAA is making off his hard work. But again, the NCAA shows how behind the times they are with the archaic things that they have going on in their rules and De La Haye now sits without a university to go in and maybe thinking of a new plan for his life. What an uncomfortable place to be in for a young man trying to maneuver his way through college.

De La Haye's case is more than likely not the first about a player getting money and more than likely is not the last. But what is amazing about this is he is essentially working a job and getting paid and not getting illegal money from boosters like some schools get punished for. Yet, he is getting treated just as bad as a kid that took money from a booster by the NCAA. Something does not smell right here and there is no way that De La Haye should not be kicking for the Knights right now. The NCAA had rules that applied and worked a while ago for them, but times are passing them by more and more by the day. Hopefully some day they realize that they need to adjust with the times instead of trying to fight the changes and differences in the time. Let the kid get his money, after all, nothing he is doing is harming the NCAA at all nor affecting their money. 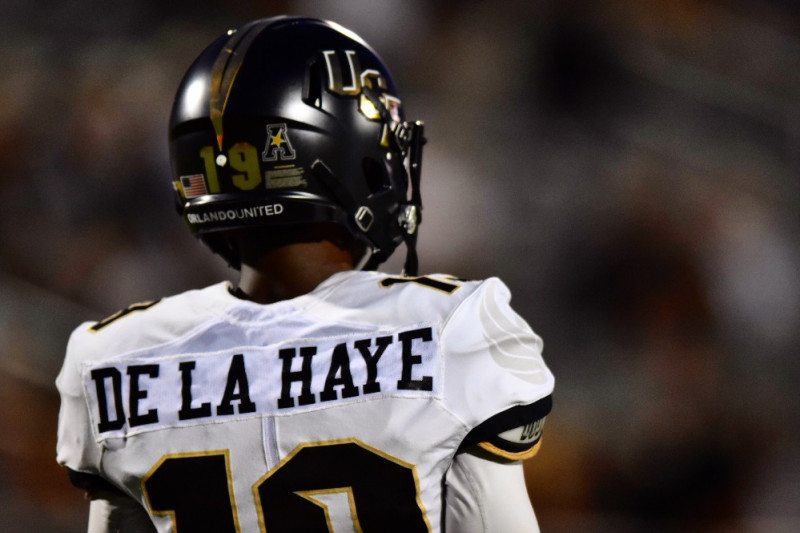