College football season is almost upon us again. Just like every season, many teams have high hopes on how they are going to do. The usual suspect on that list of teams expected to be very good is Alabama. Nick Saban and crew have another loaded team with stars at every position and they will be tough to handle. Florida State is another team that has to be looked out for and they could send a message in Week One with a win over the Crimson Tide. Those teams will be very talented,  but another team that people are talking about is out on the West Coast. It has been a while since the USC Trojans were peaking and in the title hunt. Remember the days with Matt Leinart, Reggie Bush and the fellas? Well, the NCAA would say they never existed and that we saw an optical illusion. This season though, the Trojans do bring some of that glory back to the Men Of Troy. Leading that charge is supposed to be redshirt sophomore Sam Darnold. The talented quarterback was not starting at first last season, but after a 1-2 start, he replaced Max Browne as the starter and led the Trojans to a 9-1 record the rest of the season, including a win over then number four Washington Huskies at their home stadium. Darnold would complete his redshirt freshman season with 31 touchdowns and only nine interceptions. Along with those lofty numbers, many began to throw his name around as the frontrunner for the Heisman in the 2017 and to many he became the potential first overall pick in the 2018 NFL Draft. That all sounds good and plenty want him and all the physical tools that he possesses, but let's pump the brakes on Darnold for just a second.

Darnold is a very talented quarterback and he very well could have a great season this year like he did last year, but with great expectations comes pressure. Darnold is expected to come out and be the best quarterback in college football this year. There are some that can live up to that pressure that is put on them and Darnold could very well do so. On the flipside of that, he could crack under the pressure. With him trying to show that he is the top quarterback in America, he could try to fit passes in tight spaces or make almost incredible passes work. Those passes could work out and be a good thing for the Trojans, but it also could be something that is bad and leads to him having more interceptions than he did in his first year. The results in his passing and accuracy could definitely have some affect on his draft status should he decide to leave after this, his third season on campus. Along with that his results on the field could affect how well USC does. Of course this would not be the first time a USC program has been picked to do well and done way worse during the season in which they were picked to be a darkhorse in the National Title hunt.

Speaking of hunting, let's take a look at the USC starters at quarterback since Carson Palmer entered the NFL back in 2003. That list of quarterback includes the following: Matt Leinart, John David Booty, Mark Sanchez, Aaron Corp, Matt Barkley, Mitch Mustain, Max Wittek, Cody Kessler and Max Browne. Out of all these guys, there has been one quarterback that has even been a consistent starter in the NFL and Sanchez was just another quarterback when he started for the Jets. Some of the guys on this list are probably people USC fans and college football fans in general may want to forget. If you throw in Matt Cassel, who was a career college backup USC, then you have two guys that started for a while in the NFL. What is most common on this list of players is that none of them were able to stay in the NFL a long time except for Cassel, Sanchez aznd Barkley. Heck, some of them never even got picked up in the free agency pool. So based on that information in the last fourteen years, the chances of someone picking a USC quarterback to have success in the NFL are not very good at all. Sam Darnold could be different and stand out, but then again, many thought that Matt Leinart would be special for the Arizona Cardinals when they drafted him with the tenth overall pick in the 2006 NFL Draft.

The hoopla in college football is in California and the talk of Darnold wining the Heisman Trophy and becoming the first overall pick in the 2018 Draft have pretty much been everywhere this offseason. But with the history of USC quarterbacks in the NFL and the big amount of pressure he will be under, it will be interesting how Darnold responds to the pressures of being the USC quarterback. They say pressure busts pipes or make diamonds. Which one will it be Darnold in 2018? Well, we will definitely see. 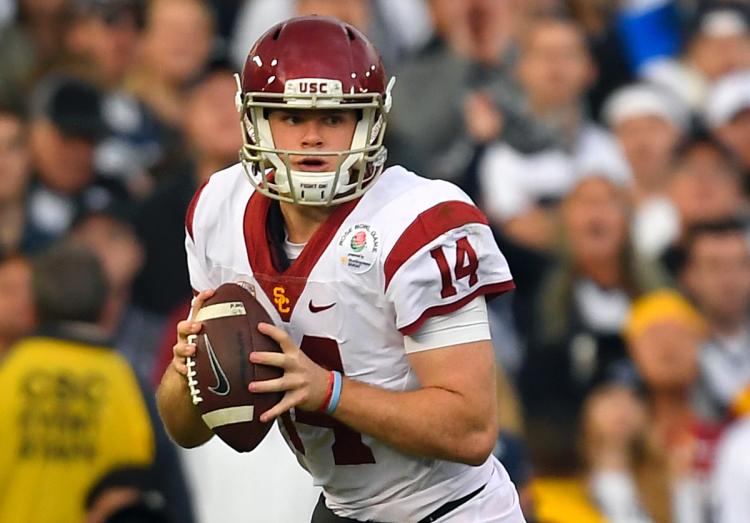