Clemson’s Title Was Only The Beginning

The Clemson Tigers have been building under head coach Dabo Swinney for a while now. Swinney took over the Tigers program midway through the 2008 season when then head coach Tommy Bowden resigned. Clemson was always talented, but they just seemed to never get over the hump and show up on a national level all because of one unexpected slipup ever season. Under Swinney, that was supposed to change. For the few years, Clemson was the same Clemson that we were used to seeing. They would win big games only to fall to lesser opponents that no one expected them to lose to. Then came Deshaun Watson to Clemson back in 2014. The talented quarterback was looked at as a special quarterback that could lead Clemson to a level they had not been to before. After all, the Tigers had all the other pieces in place around him with all the talent that Swinney had brought to town. In his first season, the results did not go the way Swinney and Watson wanted, but Watson's second season, Clemson started to turn that corner. The team that everyone thought was talented enough over all those years finally lived up to their expectations as they ended up making it to the 2016 National Title game versus Alabama. They would lose that game against Alabama but they would get their rematch the next season, building on the success of the 2015-2016 season. The loss in the title game motivated the Tigers and they were able to come down and score in the closing seconds to avenge their title loss to Alabama the previous year and win a national title. At that point, everyone though Clemson had reached its zenith and that maybe they would fall back down a bit. After all, there was no way Watson was coming back and they were losing their top receivers and some tough defensive players also. Well, someone forgot to tell the Clemson Tigers they were not supposed to be as good as they have been this year.

Coming into this season, the Tigers had to replace their top receiver, running back and quarterback along with some defensive talent. That is a tall task for a team that finally reached the mountaintop and wanted to stay there and many did not believe they would be as good. Through three games so far this year, they are not only proving they are that good this year but they are dominating opponents. The latest victim for the Tigers was the University of Louisville. The Cardinals thought they were going to avenge their loss from last season only to get dominated at home by the Tigers 47-21 in front of a stunned crowd. The Tigers have started all over again and yet they are as talented as they were before. While that is amazing, what is even more amazing is they are doing this with a guy at quarterback that has never started a college football game before this season. Junior quarterback Kelly Bryant has been patiently waiting for his time to shine at Clemson. The former 2015 South Carolina Mr. Football finalist came into Clemson as the number 8 ranked dual-threat quarterback as ranked by Rivals.com. But instead of playing when he first entered Clemson, he sat and watched the artistry of Watson and how he matured as the star quarterback for the Tigers. While Bryant watched, he definitely must have been taking notes. He is completing 68.7% of his passes, has accounted for seven total touchdowns and has only thrown one interception. Through three games, that is not bad at all for a guy that has never really played meaningful minutes in college football. He isn't at Watson's level for what he did his first three games, but he sure is playing some terrific football.

The quarterback play has been a huge plus for Clemson but so has the play of their wide receivers and running backs. Wide receivers Artavis Scott and Mike Williams along with running back Wayne Gallman left school early for the NFL draft and tight end Jordan Leggett graduated, leaving voids to fill at all those positions. Instead of Clemson suffering at that position, guys have stepped in and played well. Leading the running back crew this season is freshman Travis Etienne with 179 yards and two touchdowns on 14 carries along with sophomore Tavien Feaster with 176 yards and one touchdown. This combination of running backs along with the running ability of Bryant has made Clemson just as versatile as they were last year. And at the receiver position, Ray-Ray McCloud, Hunter Renfrow and Deon Cain have been more than able to make up for the loss of their receiving crew brethren. This combination of weapons has helped Clemson stay at a great level and not have any drop off so far on that side of the football.

Offense wasn't the only place where Clemson had to retool for this year. The Clemson defense was ferocious and they made big plays for them time and time again. Going into this season, there were questions about who would be making plays for the defense along with would the defense be able to play at the same level. So far this season, they don't seem to be missing players like linebacker Ben Boulware, defensive end Carlos Watkins and Cordrea Tankersley and Jadar Johnson in the secondary. The Tigers have only allowed 10 points a game so far this season and were able to keep the Louisville offense from exploding on them despite the good game by Lamar Jackson overall. The Tigers defense does not have a ton of takeways nor do they have a ton of proven depth, but what they do have is smarts along with the athletic ability to run with the quickest and fastest offenses in America. As the season goes on, it will be interesting to see how well they are able to keep up the pace they are on, but as of right now, they are definitely doing very well for themselves.

The Clemson culmination to a title under the leadership of quarterback Deshaun Watson was told to us as a story with an ending being the title. In all actuality, the title may have been just the beginning for Clemson. They have recruited very well as evidenced by this year's start and they continue to pound the recruiting trail. The Tigers currently have the 15th ranked recruiting class but could easily slide higher with a few recruits. The level that Clemson can be solely attributed to Dabo Swinney and his tireless recruiting and now he is about to reap all the benefits of what he has done. 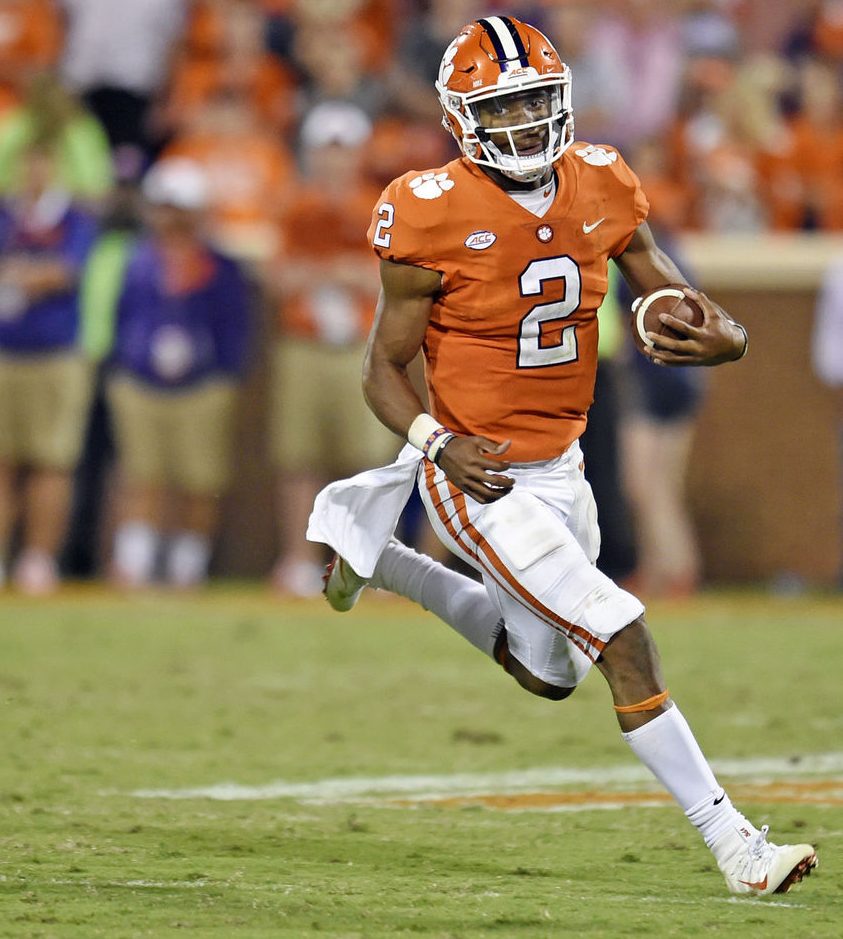