Time To Move Past Butch Jones

The Tennessee Vols stepped back on the field for the first time since they faced the University of Georgia. In that game, the Vols were completely obliterated in each phase of the game. At the end of that 41-0 drubbing, there were plenty Tennessee fans that were calling for Butch Jones' job. While he did not get fired after that appearance, the writing may be on the wall after this latest game. The Vols lost 15-9 to the South Carolina Gamecocks in front of a packed house in Knoxville. The mood after the game was one of anger from Tennessee fans and one that was ready to move on. The Butch Jones era had went from hope to frustration and anger in two years and it seems like no more will be tolerated by the fans of the team. So with that being said, it is safe to say that Butch Jones will more than likely be moving this offseason and not because he wants to. With that news all but a certainty, the next question goes from when will Butch be fired to who will replace Butch Jones at Tennessee. At this point, everyone has mentioned a name (no UT fans. John Gruden is not coming back to coach college football), but in my opinion, there are only two names that would be perfect fits there next season.

Who remembers the last time Tennessee was on top of the college football mountain? If you have any sense of Volunteers history, then you remember that team that had Peerless Price at wide receiver, Al Wilson at linebacker and Tee Martin at quarterback. No one expected them to win the National Title the year after Peyton Manning left but they did and they were led offensively by Martin. He made big plays and did all that was necessary to bring home the hardware. Well, some years have passed and Martin is now the offensive coordinator of the University of Southern California. He has been offensive coordinator for the Trojans for a while now and has helped their offense surge back to where it wants to be. So when it comes to the University of Tennessee, Martin would be the perfect fit because he currently coaches college football and he definitely has ties to the school. And although it would be his first head-coaching job, it would be an easier transition for him because of his ties to the program.

Martin is a good option for Tennessee, but he isn't the only coach that will be mentioned that has serious consideration written all over him. Jim Bob Cooter once was on Rocky Top. Cooter was a backup quarterback for Tennessee in the 2000's and never really played much at all. Although he never played, he definitely learned a few things. He started as a graduate assistant at the University of Tennessee and he has grown to now be the offensive coordinator of the Detroit Lions. His expertise has shown in some of the things he has done with the Detroit Lions offense and Matt Stafford and that kind of quarterback expertise is something that could be useful at Tennessee. Cooter, like Martin, has Tennessee pedigree and the fate of the program will mean more to him and Tee than any other person that will get looked at for the head coaching position. While Cooter does not have the level of experience as a player, he certainly has the leg up on Martin as a coach in terms of his level of experience. Cooter coming to Tennessee may not have the same buzz as a National Title-winning quarterback, but it would still be something that Tennessee fans would love.

Other than these two former Tennessee quarterbacks, it is totally wide-open as to who Tennessee will select as their new head coach. And while it has not been officially announced, we all know that Butch Jones is as good as gone as the head coach of the Tennessee Vols. While there will be other names mentioned as the season goes on for the Vols, these two candidates seem like the perfect fit for the Vols next head coach and should be the first coaches approached about taking over the program. If not these two, then Vols fans may not like the other candidates because the reality is the money may not be there to bring in a high-profile coach. 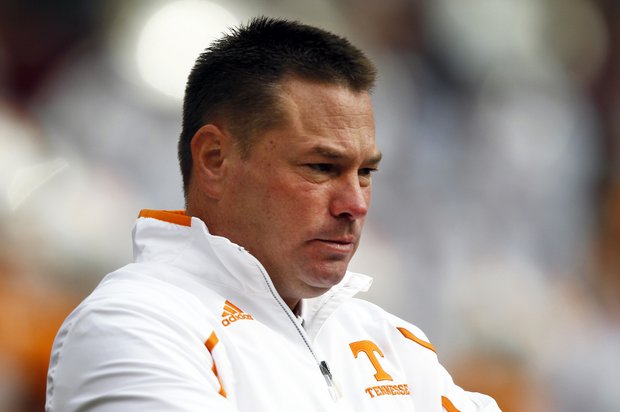