There’s Some Issues With Baker Mayfield

After the year Baker Mayfield had last season, many thought he was a lock to leave for the NFL. Instead of leaving though, he made the decision to come back to school for his senior season and he has done nothing but benefit from that. First, he was able to lead the Sooners to the College Football Final Four this season, which is somewhere that evaded them the previous season. As far as personal accomplishments, Mayfield could not have written a better script for his season. He became an All-American this season and he also won the prestigious Heisman trophy, joining an elite fraternity of great football players. Nothing seemed to go wrong for Mayfield this season. And as a benefit for him staying in school, there are some that think he should be mentioned as one of the first quarterbacks taken in the 2018 NFL Draft. While some may disagree and lean more towards guys like Josh Rosen from UCLA or Josh Allen from Wyoming, you cannot deny that what Baker Mayfield has accomplished this season has put him in the conversation. While what he has done has been great on the field, there is definitely a bit of concern when it comes to thinking he is your franchise quarterback.

One of those concerns has to be the success, or lack thereof, of Oklahoma quarterbacks in the NFL. If you take a look at the last five starting quarterbacks since 1999, the only one that has had any success in the NFL is Sam Bradford. The former number one overall pick from the 2010 NFL Draft was solid when he was on the field, but he can never seem to stay healthy. As a result, he has never really been able to string together three or four years of solid play. Other than Bradford, it's like a who's who of quarterbacks as to what they have or have not done in the NFL. Josh Huepel is now the head coach at the University of Central Florida, Jason White ended up winning the Heisman and had a cup of coffee in the NFL, Landry Jones is a backup in Pittsburgh, Blake Bell changed positions and went to the NFL as a tight end and Trevor Knight transferred. That is just a few former Oklahoma quarterbacks and the storylines on all of them is not good. Baker may be talented as a college quarterback, but so were all these guys and they ended up nowhere. The one good thing he can say he has going for himself that is different than the others is that he is more athletic than most of them and has a solid arm. Even with that though, the curse of Oklahoma quarterbacks in the NFL is something that he could potentially not escape.

Along with the long line of bad quarterbacking from former Oklahoma quarterbacks in the NFL, Baker also has an issue with attitude. Now by all means, I know college kids are going to be feisty and play with passion. That is what they are supposed to do at that age being at that level of play that they probably dreamed of as kids. While all the excitement is good, what isn't good is some of the antics of Mayfield. For example, let's take a look at the Kansas game. True enough, the Kansas players did not shake his hand and there were some cheap shots, but in no way was what he did acceptable. An obscene gesture and curse words hurled at Kansas may have been something he wanted to do, but he should not have done it. It shows a little bit of immaturity that is still within him and could scare off some NFL teams. Some will say that it was an isolated incident and that he is just a passionate guy, but those were some of the same things that were said about Johnny Manziel and we see how that turned out. Mayfield is a talented quarterback and there is no doubt about it, but you have to wonder what happens if someone gets in his head and by the looks of it, it seems that it isn't as hard to get in his head. Keep in mind, this has not been the only incident he has been involved in as well.

Mayfield is a talent and there is no doubt that he has skills that could make him very valuable in the NFL. He can run, he can pass and he can lead. While all those skills may be there, some concerns have to be there about his mental framework along with the quarterback curse that seems to be attached to Oklahoma quarterbacks. We shall see what happens when it comes to Mayfield, but it will surely be interesting to see how things come out as he gets ready to enter the professional level of football. 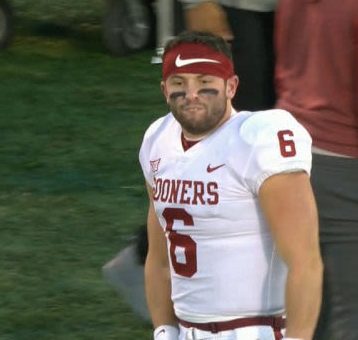