Art Briles Gets Fired From Baylor

The Baylor Bears used to be a program that no one thought about. They were bad and no one thought they would even be a program to be reckoned with. Then came the hire of Arti Briles in 2008. The veteran coach, who grew up in Texas and played college football at the University of Houston, was charged with taking over the head coaching position and turning around the Bears football program. In his first two years, Briles had back-to-back seasons of four wins and eight losses. But in 2010, the pendulum started to swing towards success. The Bears went 7-6 and made it to a bowl game that year. Since that breakthrough year, the Bears have gotten better and better.  And in the last five years, the Bears have put up four seasons of ten wins or more and become one of the programs to watch across the country. But also during that time, the Bears ignored some important things about some of their players. There are reports out that there were women that were discouraged from reporting sexual assaults because they were accusing football players. And in two of those cases, there were players that were convicted of sexual assault. There was an investigation into the matters and the conclusion was that Briles had something to do with the situation and he had to be removed. So there goes Briles, one of the best coaches in the country, out the door. And more than likely his career as a college coach is over.

Briles was successful on the field. And his teams brought in lots of money for the university. But while he was helping the team succeed off the field, he was not teaching the life lessons he should have been teaching off of it. When someone messes up, there have to be held accountable. And in Briles' case, he was not very good towards people that threatened his football program. He wanted to win so bad that he ignored anyone that was going to potentially take away from it. And he wanted to win so bad that he even allowed a guy to transfer to his school despite reports he was told about his abusive nature towards women (that player was eventually convicted and had to do 180 days in jail, was put on 10 years felony probation and has to register as a sex offender for the rest of his life). Now that takes "winning at all costs" to a new level. And although Briles denies knowing that the player in question was involved in violence towards women, there are others that say he knew the whole time. So what you can eventually gather from his personality is that he was loyal to his football players and wanted to win more than anything, including the welfare of human beings that were hurt by players on his team.

Briles was wrong in this instance and he will be paying the price for it. But he is not the only one that was guilty of wrong. Apparently school president Ken Starr has to take some blame. He has reportedly apologized to each victim and will not be the school chancellor instead of the president. Starr actually is very lucky that he was not fired and quite honestly, he should be. But Briles and Starr are probably not the only people within Baylor's program that were involved. And honestly, the school and the firm they used to do the investigation ought to clean house. Any and everyone involved should be getting the pink slip because they created an environment of fear for students and women on campus. But the unfortunate part for all of this is there will be some innocent people that have to catch the brunt of this punishment. Those people are the football players that did nothing wrong. Unfortunately for them, the team has to be punished for the horrible actions of a few involved with the team and on the team. Those punishments could include reduction of scholarships and loss of bowl game eligibility. It may not seem fair for those players, but they can blame their coaches and their university for failing them. If these punishments are levied on the university, then those players should be able to transfer without having to sit out any years. It is only fair to them since they were not involved in the matters.

Briles and Baylor started off as a beautiful marriage. And now this marriage has ended in an ugly divorce. And the even uglier part is now some are talking about him being a coach at the NFL level. While his spread offense would not be NFL-friendly, his issues here at Baylor should be something that can keep him out of the NFL. And especially with the NFL having issues with their perception when it comes to domestic violence, the NFL may want to distance themselves from Briles as well. Many wondered why Briles' name was even in the running for a NFL job in the past, well this all helps it make perfect sense. He knew what was going on at Baylor and wanted to escape it before it caught up to him. But unfortunately for him, he did not. And now his career will pay for it as it should. Football is a sport, but life is precious. Trading wins for lives ruined is never a fair trade nor should it ever be attempted. 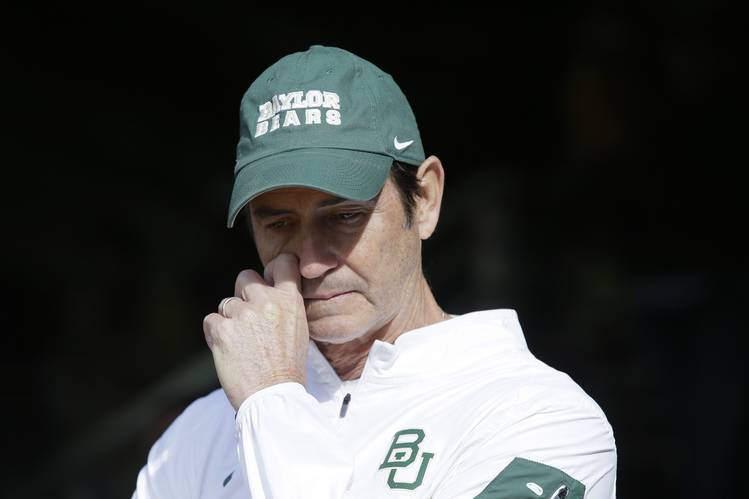