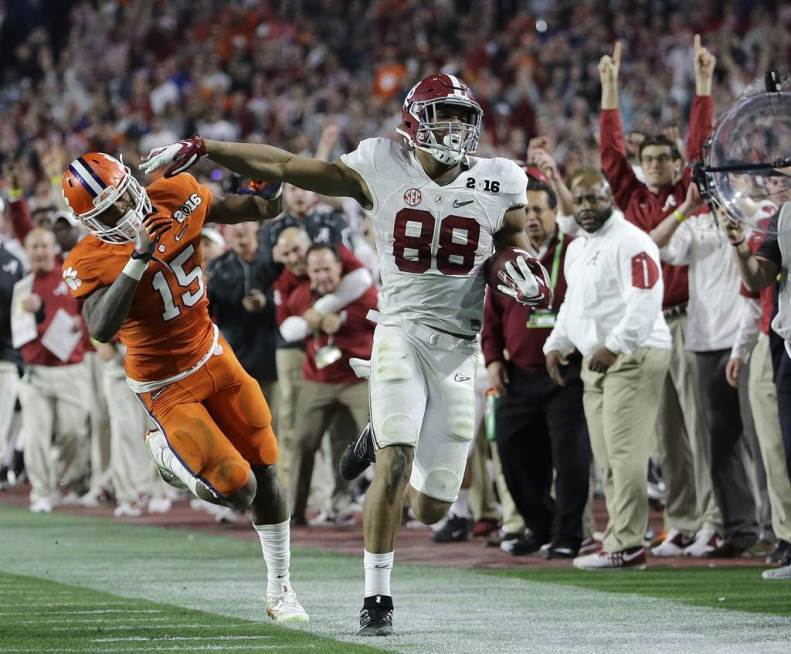 It all came down to one game. The Alabama Crimson Tide, led by Heisman Trophy winner Derrick Henry, faced off against superstar quarterback Deshaun Watson and the Clemson Tigers. The two best teams in the country meeting up in the Title game. Could Clemson topple one of the most powerful programs of the last decade or would Alabama add to their legendary status in college football. Well, the game was an epic battle of two good teams. There were momentum swings and great plays. But in the end, the Crimson Tide made more things happen to win the game. And the Crimson Tide are back on top where they have been so often after beating Clemson 45-40. The game was something that many will remember because of the excitement that was around it. And it lived up to every bit of the billing. But Alabama won the game with some things you would normally not think about: special teams and the passing game.

The special teams was spectacular for Alabama all game long. Their effect on the game began at the end of the first half. Alabama had to punt to Clemson and the Tigers were driving to get a score before half. The Crimson Tide defense was able to stop them, but they took it to another level when the Tigers attempted a field goal. Facing a potential deficit at halftime with Clemson getting the ball after the half, Alabama surged up front and got a piece of the Clemson field goal attempt. The result was a missed field goal and a tie score at the half. But that was not it for the great special teams play for the Crimson Tide. Alabama tied the game at 24 on a field goal and were appearing to line up to kick the ball to Clemson. But little did we know that Alabama and Nick Saban had something up their sleeves. Kicker Adam Griffith popped up a short kick that Clemson was not prepared for and Alabama’s Marlon Humphrey caught it out of the air 12 yards down the field. That play was huge because it led to a two-play drive for a touchdown that put the Crimson Tide up 31-24. Clemson would come back and kick a field goal to get within four points, but then Alabama struck again on special teams. This time, Alabama’s Kenyon Drake received the ensuing kickoff and returned it 95 yards for a touchdown while extending Alabama’s lead in the game. Those three plays right there led to 14 points for Alabama and kept three points off the board for Clemson. And in looking at that 45-40 score to finish the game, the Crimson Tide needed every point they could get.

But the special teams play was not the only standout of this one. On the game’s second drive, the Crimson Tide scored on a 50 yard touchdown run. At that point, some were thinking the Crimson Tide would run right at the Tigers and wear them down. Henry would go on to have at least 158 yards rushing, but it was the passing game that made it happen for the Tide. Tight end OJ Howard was the guy who was tabbed to exploit the Clemson secondary. With cornerback Mackensie Alexander out, it seemed the Tide went after the cornerback’s replacement. Howard’s first score was on a miscue of the Tigers secondary where he was wide open. And his second touchdown was an incredibly easy one where they flooded the area where Alexander’s replacement was playing. The only person that could have tackled Howard was the lines on the field. Those two touchdowns were huge, but his biggest catch was not even a touchdown. On second and 12 late in the fourth quarter while holding a five-point lead (38-33), Alabama quarterback Jake Coker hit OJ Howard with a pass in the flat. And when he hit him with that pass, Howard made one guy miss and took off racing down the sideline for 63 yards. That play put Alabama in position to score again. Six plays later, Henry scored his third touchdown for Alabama in this one. Plenty can talk about the running game and their effect on this game, but if it were not for OJ Howard and Jake Coker and the plays they made, then Alabama could have been looking at losing this game.

Clemson gave the Crimson Tide the best shot they had. Deshaun Watson was special in this game. But in the end, it was just not enough as Alabama just made more game-winning plays than Clemson did in all phases of the game. And as a result, they are now celebrating another title for Saban and the Crimson Tide. With this title, expect the ghosts of Paul “Bear” Bryant to be awakened and for some to question whether or not Saban is the best Alabama coach of all-time.