The Redhawks Power Back To Beat Tennessee State

In a game of swings that went back and forth, the Tennessee State/ Southeast Missouri (SEMO) game was a thriller. But in the end, the Redhawks were able to pull it out 78-75 in overtime.

Jamal Calvin came out how for the Redhawks, hitting his first two threes of the game and getting SEMO out to a 6-4 lead. Jordan Reed and Wayne Martin were the TSU offense early on, as both scored four points apiece to keep the Tigers in the game.

From there, the Redhawks went on a 12-5 run in seven minutes to take a 16-8 lead with 11:59 in the first half. The Tigers responded to the Redhawks run by going on their own run 5-0 run, capped off by a three-pointer by Armani Chaney, that pulled the Tigers within three at 16-13.  The Redhawks got another set of free throws, but Chaney nailed another three to bring TSU within two points. Ken'Darrius Hamilton nailed another nailed a three-pointer to pull the Tigers within two points at 21-19 with under nine minutes left.

Redhawks freshman Denzel Mahoney kept Southeast Missouri in the game with his hot shooting. And with his third three-point of the game, he got the Redhawks tied with the Tigers. But four straight points by the Tigers gave them a four point lead, 30-26, at the 3:52 mark of the half.

Tennessee State came out after the half and picked up where they left off, pounding the Redhawks inside. The Tigers started the half on a 10-2 run, capped off by a Christian Mekowulu bucket while being fouled. His free throw gave the Tigers a 44-30 lead with 17:01 to start the second half.

Antonius Cleveland of SEMO hit a three-pointer to bring SEMO within 11 at 44-33 as the Tigers took a timeout with 13:12 to go in the game. After TSU scored four points to put go up 48-33, SEMO began to wake up. The Redhawks went on an 14-1 run  to bring them within nine points at 49-47 which led to a timeout by Tennessee State with 8:36 remaining in the game.

The Tigers stopped the bleeding temporarily with Tajhere McCall getting four of Tennessee State's points in an 8-3 run to take a seven point lead. But the Redhawks would respond, getting some more scoring from Mahoney as he hit two free throws to bring his total at this point in the game to 25 points. The Tigers would hit one more free throw as the Redhawks would hit another basket to bringing keep the Redhawks within striking distance at 58-54 with 3:20 left in the game.

Two Wayne Martin free throws out of the timeout extended the lead of Tennessee State to 60-54 as the game came down the stretch. But Tahj Eddy hit a huge three with under three minutes left to bring the Redhawks within three points. And with a Mahoney driving finish, the Redhawks got within one with a little over two minutes remaining. Wayne Martin would score another layup for TSU, but Mahoney would come down and score again, keeping Southeast Missouri within one point.

With a one point lead and 53.2 seconds left in the game, Armani Chaney turned the ball over, leading to a layup for Antonius Cleveland and McCall's fifth foul. The Redhawks would take their first lead in a long time on two free throws. But TSU would come right back and get two free throws from Armani Chaney to tie the game with 27.6 seconds left. And after a last-second shot by the Redhawks would not go in and the teams would head to overtime.

In overtime, Trey Kellum opened up the scoring with two free throws and Mahoney would pick up where he left off, scoring another two points in overtime to bring his total to 33 points for the game. Mahoney would split a set of free throws to give the Redhawks a five point lead. The Tigers would finally respond to the blow dealt early in overtime by SEMO, getting a Ken'Darrius Hamilton basket off an assist from Armani Chaney. Wayne Martin would hit one of two free throws to bring TSU within two points at 69-67.  But Antonius Cleveland would stop the quick TSU run by hitting a midrange jumper, pushing the lead back to four points. Cleveland would hit one of two free throws after being fouled on a dunk attempt to push the lead to 72-67.

Off a screen and roll, Ken'Darrius Hamilton would drill a three to tie the game at 75 for the Tigers. But the Redhawks would come right back, this time with a Tahj Eddy three-point with 2.2 seconds left as the Redhawks crowd erupted. After a Tennessee State timeout, the Tigers had to go fullcourt to tie the game with 2.2 seconds left. Tennessee State would fumble away the ball and not get a last-second shot to win the game.

The Tigers were led in scoring by Wayne Martin with 19 points and Armani Chaney with 14 points. The Redhawks led by Denzel Mahoney, who scored a career-high 34 points, and was followed by Antonius Cleveland with 16 points.

"It felt great because I struggled offensively today," said Eddy on the game-winning shot.

McCall, who had to watch his Tigers finish the game without him, had this to say on watching his team play without him, "I don not know how to explain it. I want to help the team so much and I felt like it is my job to be out there and I kind of let them down. They fought hard. It is not much I could do after that point. I just put it in my brother's hands that I went to war with and I felt they did a great job."

The Tennessee State Tigers' season is over, but after being asked if it was a disappointment, Tigers coach Dana Ford had this to say, "I would not say this is a disappointing season. This is back-to-back years wit winning seasons. We have won 37 games the last couple of years. We have had some disappointing losses. I do not think the whole season was disappointing."

Coach Ray, who saw his team fight back from huge deficits all game, was very proud of his team. "I thought it was a gutsy performance by our team. Really proud of the way those guys battled. " 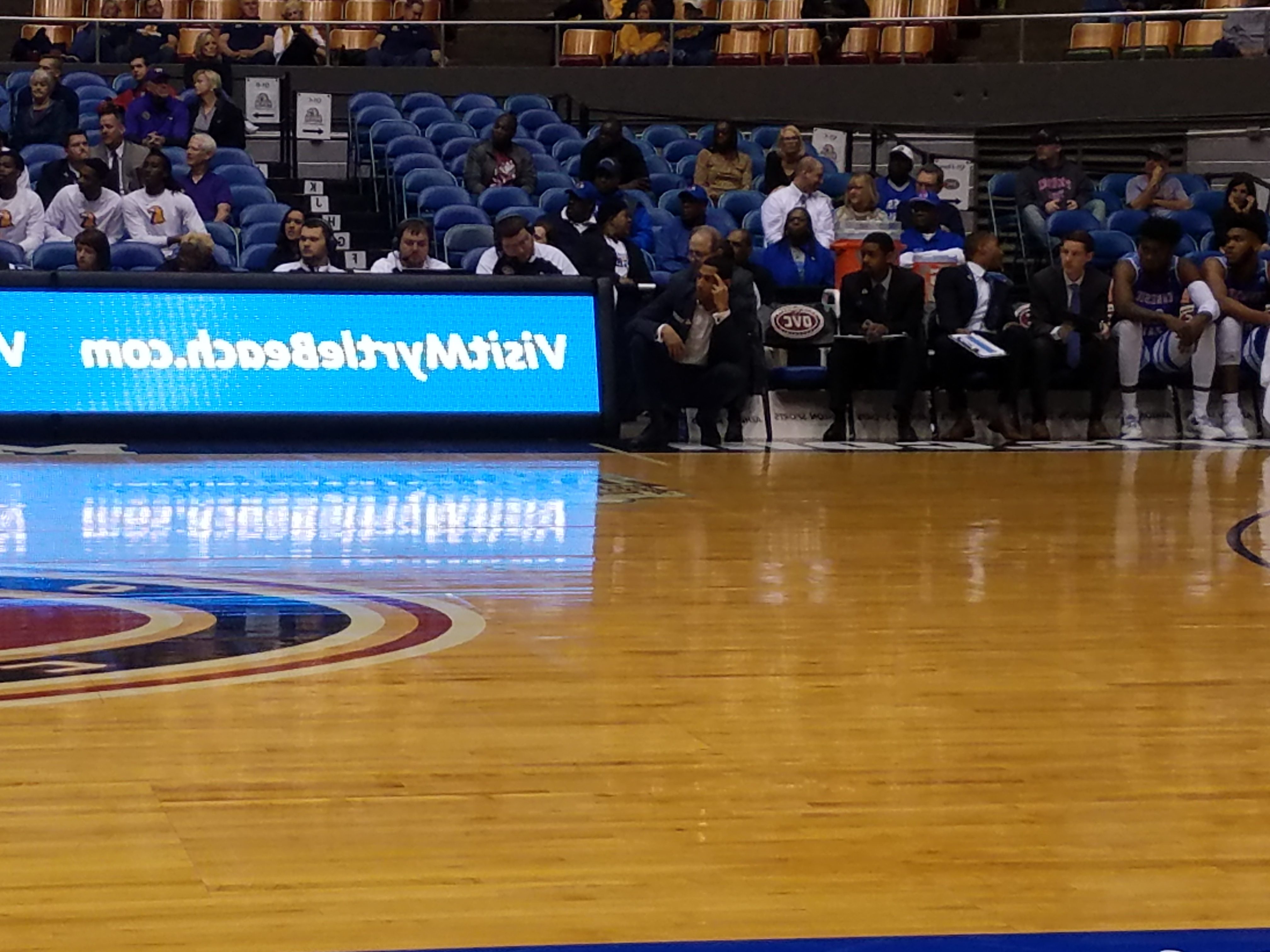