The Skyhawks Return To The OVC Championship Game

The second-seeded Skyhawks took on the Murray State Racers in the second matchup of the night. And in this rematch of a thrilling regular season finale, the Skyhawks were able to prevail again 73-67, returning to the OVC Championship game.

The Racers opened up the scoring with a layup by Jalen Dupree. From there, UT-Martin would go on a 7-0 run. That run was stopped, however, by a Jonathan Stark three-pointer, bringing the Racers within two points. But Kedar Edwards answered that three-pointer with his second one of the game, putting the Racers up five before Jonathan Stark scored one again, bring the game to a 10-7 score. The two teams would trade buckets and go to the first media break with the Skyhawks leading 12-9.

The Skyhawks would get a couple layups from Javier Martinez and a three from Bryce Jones that would set the score at 14-12. From there, the Skyhawks would score five straight points before Stark would drain his second three-pointer of the game, bringing the score to 19-15.  Grace would score in the paint for the Racers to bring Murray State to within two points with 11:46 remaining.

Out of the media timeout, Murray State took the lead off a Terrell Miller three-pointer, their first lead since 2-0 early in the game. And the Racers would extend that lead with a layup by Jerami Grace that would put them up three, 22-19. A Kedar Edwards layup would put him at ten points for the half and bring them within one point with 8:32 left in the game. And the Skyhawks would take the lead back after a Javier Martinez layup.  The lead would not last long though, as Gee McGhee would hit a three-pointer as the shot clock expired on the following possession for Murray State. Chandler Rowe of UT-Martin would answer thought hitting a three-pointer from the corner and putting the Skyhawks back up 26-25 with 6:38 left in the half.

After another media timeout, Bryce Jones would knock down two free throws to put Murray State back ahead, 27-26. A Gee McGhee layup would put the Racers up by three as the Skyhawks would call timeout to stem the tide. Out of the timeout, the Skyhawks regrouped as Matthew Butler would hit a deep three-pointer from the top of the key, tying the game at 29.

With the game tied coming out of a media timeout, the Skyhawks would draw up a play for one of their athletic bigs, Malik London. The result was him throwing down a dunk off a lob pass and putting the Skyhawks up two points. But Bryce Jones quickly erased that lead for the Racers with a three-pointer to put them up one and a Gee McGhee layup put the Racers up three with 2:30 left in the half.  All seemed to be going against the Skyhawks in the next possession, but Kedar Edwards came through again for them, nailing a desperation three while being contested. The shot would tie the ballgame at 34.  The game would stay tied at 34 until the final minute of the first half, when Stark drove the lane and dished to Miller for the layup and a two point lead for the Racers. The Skyhawks would miss a layup to tie the game before the half and go in trailing 36-34.

Both teams would swap three-pointers as the game began to seesaw back and forth. Butler would come down on back-to-back possessions and hit tough jump shots, extending the Skyhawks lead to six points, 53-47, with 10:23 left in the game. Jalen Dupree would stop the min-Skyhawks run with a layup, bringing the Racers within four points. And after a rebound, Bryce Jones would push the basketball up the floor and hit a reverse layup to bring Murray State to within two points. But as soon as they got within two points, Fatodd Lewis hit another huge three to put the Skyhawks up by five points with a little 7:23 left.

Out of the media timeout, Butler attacked the rim and got fouled. His two free throws gave the Skyhawks their biggest lead of the game at that time, seven points. Stark, however, would go to the basket and get fouled for the Racers, hitting both free throws and pulling the Racers to within five points. But whenever the Racers would get close, the Skyhawks would hit a big three. This time it came from Jacolby Mobley, who had been battling sickness all game long. He would hit a three-pointer from the corner and put the Skyhawks up eight. A Fatodd Lewis layup then pushed the UT-Martin lead to ten when they called a timeout at 5:16 left in the half.

With Murray needing something and down ten, Terrell Miller would come through for them. The junior hit a corner three-pointer to trim the Skyhawks lead to seven. Jacolby Mobley would strike again with a layup this time, putting the lead a nine with 3:43 left in the half.  McGhee would get fouled and hit one of two free throws to bring the Racers within eight points. Terrell Miller would hit a layup to bring the Racers to within six points and Jalen Dupree would hit another layup, trimming the Skyhawks lead to four points. But all the momentum the Racers built would be taken away when Chandler Rowe would hit a layup to put the Skyhawks up six points with 1:24 remaining.

Both teams would trade missing layups for a few minutes which left the Racers with the basketball with 1:07 left. Murray State's Bryce Jones would drive to the basket with ease and finish with 58.2 seconds left and the Racers would immediately call a timeout, trailing by four points. The Racers would foul Chandler Rowe, sending him to the free throw line. He would hit one of two, putting the Skyhawks up five with a little under fifty seconds left. The Racers would take a couple cracks at it, but eventually get a three-pointer from Bryce Jones in the corner to climb within two points with 38.7 seconds left. Murray State would foul Mobley and he would hit both free throws in a one-and-one situation. Bryce Jones of Murray State would come down and turn the ball over on the ensuing possession. Rowe would come down and hit one of two free throws for the Skyhawks and UT-Martin would force a miss from Murray State. Butler would hit one of two free throws, bring the Skyhawks lead to 72-66.

Murray State would not quit fighting, as Stark would come down and get fouled. He would hit one free throw and then get called for a free throw violation on the second. An ensuing foul on the Racers sent Javier Martinez to the line where he hit one of two free throws as the Skyhawks closed the game and advanced to the OVC Championship game.

The Racers finish the season at 16-17, with their first losing season in 30 years. The Skyhawks march on to the OVC Championship game to face the Jacksonville State Gamecocks. 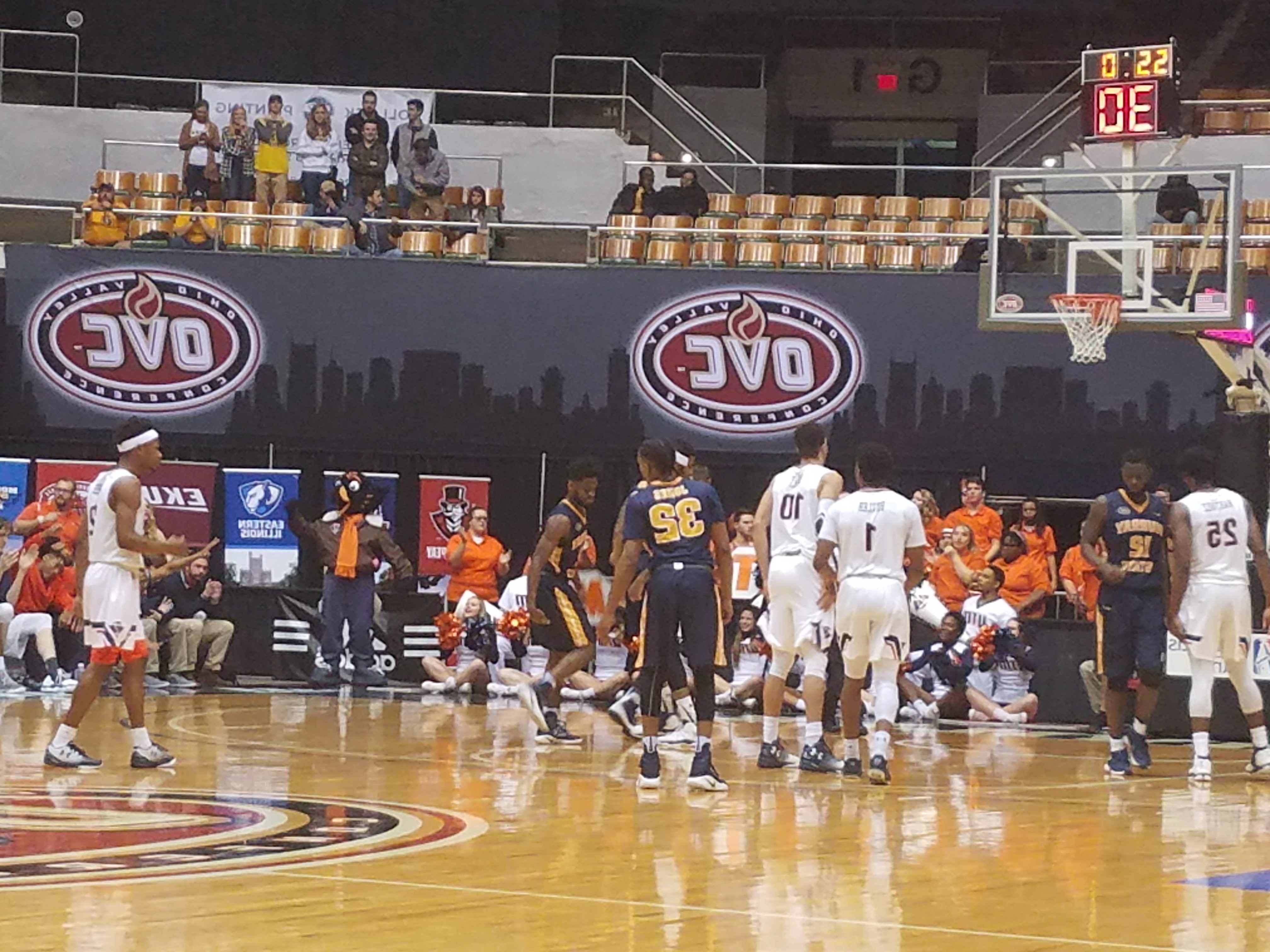