Jacksonville State was an unlikely competitor in the OVC Championship Game. For the Skyhawks, this was expected. The two teams met on Saturday night in the Music City for what was an entertaining game. But in the end, the Gamecocks had what it took to win the Ohio Valley Conference crown, beating UT-Martin 66-55.

UT-Martin opened up the scoring, with Jacolby Mobley hitting three from the top of the key. Eric Durham of Jacksonville State matched his three with one of his own to tie the game.  Javier Martinez would get a layup on the next possession, giving UT-Martin the lead back, 5-3. Malcolm Drumwright continued the trend of three-pointers for Jacksonville State, nailing a three-pointer to put the Gamecocks up one, 6-5.

From there, Jacksonville State would hold that one-point lead for four minutes until UT-Martin's Matthew Butler hit a jump shot with 13:39 left in the first half. But Greg Tucker would come down and match Butler's jump shot with one of his own, putting Jacksonville State back up by one point. After a couple more possessions, Tucker would hit another shot, this time a three-pointer, to put the Gamecocks up 11-7 going into the 11:26 media timeout.

Jacksonville State would continue to build on their lead after the timeout, getting two free throws from Christian Cunningham to extend their lead to six. Fatodd Lewis would stop another early drought for the Skyhawks, as he rebounded a Kedar Edwards miss and put it back in. Malcolm Drumwright would answer that two by Lewis with a contested jump shot, pushing the lead back out to six, 15-9. Matthew Butler finally struck again to keep the Skyhawks close, hitting a midrange jumper from the top of the key and pulling the Skyhawks within four. But Malcolm Drumwright continued his hot hand, hitting a three-pointer and putting the Gamecocks up 18-11. A turnover by the Skyhawks followed by a layup by Erik Durham gave Jacksonville State a 20-11 lead and forced a Skyhawks timeout.

The Skyhawks would get two back-to-back layups from Javier Martinez and a Matthew Butler jump shot to bring them within three points out of the timeout. The 6-0 run by the Skyhawks would force Jacksonville State to take a timeout with 5:42 remaining in the half. The Gamecocks would come out of the timeout and get a Greg Tucker jump shot to go in as he was fouled. The free throw was good as the Gamecocks would extend their lead again to six at 23-17. The Skyhawks would throw the basketball away on the other end of the court and Tucker would attack the rim and get a layup this time with the foul. Another three-point play gave the Gamecocks a nine-point lead once again. The leading scorer of the Skyhawks, Jacolby Mobley, had been quiet since the opening basket of the game. But he found a way to get himself involved in the game, stealing a pass and taking it the length of the floor for a layup and the foul. Mobley would hit the free throw, closing the gap to six points.

The Skyhawks would get a defensive strip on the other end of the court and Fatodd Lewis would hit a layup, bringing the Skyhawks within four points. But the Gamecocks would get another three-pointer from Durham and that would put the lead for Jacksonville State back at seven points. Greg Tucker would come down and hit another three-pointer after another UT-Martin turnover and that would give the Gamecocks a ten-point lead with 1:35 left in the half.  Two more free throws from Jacara Cross would take the lead out to 12 points with 1:17 left, completing an 8-0 run before Javier Martinez would hit a free throw for the Skyhawks, putting the score at 34-23. Tyrik Edwards would hit a layup as time was going out in the first half and the Skyhawks faced a 13 point deficit, 36-23, at the half.

The big difference in the first half was the three-point line. The Gamecocks went 6-15 from the three-point line in the first half to UT-Martin's 1-5 from the great beyond. Along with that huge difference, the Gamecocks were hitting the same tough shots that they were hitting as they took down the Belmont Bruins in the semifinals. For the Skyhawks, it seemed like they were a little tense in the opening period and that resulted in fumbled passes, missed layups and lapses on defense that would hurt them.

Out of the timeout, Jacolby Mobley would hit a driving layup, cutting the Gamecocks lead to eight points. A traveling call on Christian Cunningham would give the Skyhawks the ball back and they would take advantage, getting a basket from Kahari Beaufort to bring the Skyhawks within six points. The score would stay at 37-31 for a couple minutes before Erik Durham would nail a three-pointer, giving the Gamecocks a little more breathing room at 40-31. A Norbertas Giga dunk would extend the lead to 42-33 before Javier Martinez would hit a layup and the Skyhawks would immediately call a timeout to settle things down.

The Skyhawks would set up some pressure defense out of the timeout, trying to get the Gamecocks out of rhythm. But instead of getting them out of rhythm, the Skyhawks gave up a layup to Durham to extend the lead to eleven points going into a media timeout at 9:46 to play.

The Skyhawks would get a layup out of the timeout to bring the Skyhawks again to a nine-point deficit. But Tyrik Edwards would hit an acrobatic layup to extend the lead right back to eleven. Matthew Butler would answer that layup with a contested fadeaway jump shot, bringing the Skyhawks to within nine points again. Two free throws from Jacara Cross would push the lead again to eleven points. And Cross would again make the Skyhawks pay with a layup off a rebound to take the lead back to thirteen points. At that point in time, Mobley began to get more aggressive, taking the basketball to the basket. He would get fouled on his drive and hit two free throws, taking the lead back down to eleven. Matthew Butler would come down and get fouled on a three-pointer and hit two of three free throws to cut the Gamecocks lead to nine points. But Malcolm Drumwright would drill a huge three-pointer to take the lead back to twelve points with 3:53 to play.

Out of the timeout, Mobley would hit two free throws to bring the lead down to 10. But a dunk by Nobertas Giga and a free throw would take the lead to thirteen points again. The Skyhawks would get the lead down to eleven with 2:09 left. A steal by the Skyhawks and two free throws by Javier Martinez would knock the lead down to nine with 1:46 to play. Another Gamecocks turnover would give UT-Martin the ball back, but they would miss a three-pointer. Tyrik Edwards would take the ball down the court and finish with a finger roll, taking the lead back to eleven points and an Erik Durham layup while getting fouled would essentially ice the game, as the Skyhawks were down 62-49 with 54.2 seconds left.

Jacolby Mobley would hit a three-pointer to bring the Skyhawks within ten at 62-52 with 44.3 seconds left. The Gamecocks hit two free throws and then Matthew Butler came down and hit a three-pointer, bringing the Skyhawks within nine points with 33.6 seconds left. Durham would hit two more free throws, putting the Gamecocks down 11 with 22 seconds left. Mobley would fumble the ball out of bounds and the Gamecocks would dribble the clock out and explode in jubilation, as they did the improbable and won the Ohio Valley Conference Tournament.

The Skyhawks were led by Jacolby Mobley in scoring with 18 points followed by All-Tournament team member Matthew Butler with 17 points and Javier Martinez with 13 points and 11 rebounds. Butler had this to say about the sting of this loss: "As much as it hurts me to lose, I am even more sad for the seniors. I saw all the hard work they put in the last two years. To come up short the last two years I do not know how they feel. If it was me, I would be devastated. "

For the Gamecocks, Erik Durham led them in scoring with 17 points, followed by All-Tournament team selection Greg Tucker with 14 and OVC Tournament MVP Malcolm Drumwright with 13.  Tucker, a senior, spoke on how it felt to make the NCAA Tournament: "It's just a great feeling to be honest. I mean I really can't explain it. We're just all happy we got the job done."

UT-Martin head coach Anthony Stewart said that the Skyhawks would be playing in the postseason, but they were just not sure what tournament at this point. The Gamecocks, however, will be watching and waiting a week from today to find out where they will be playing, as they make their first trip in school history to the Big Dance. 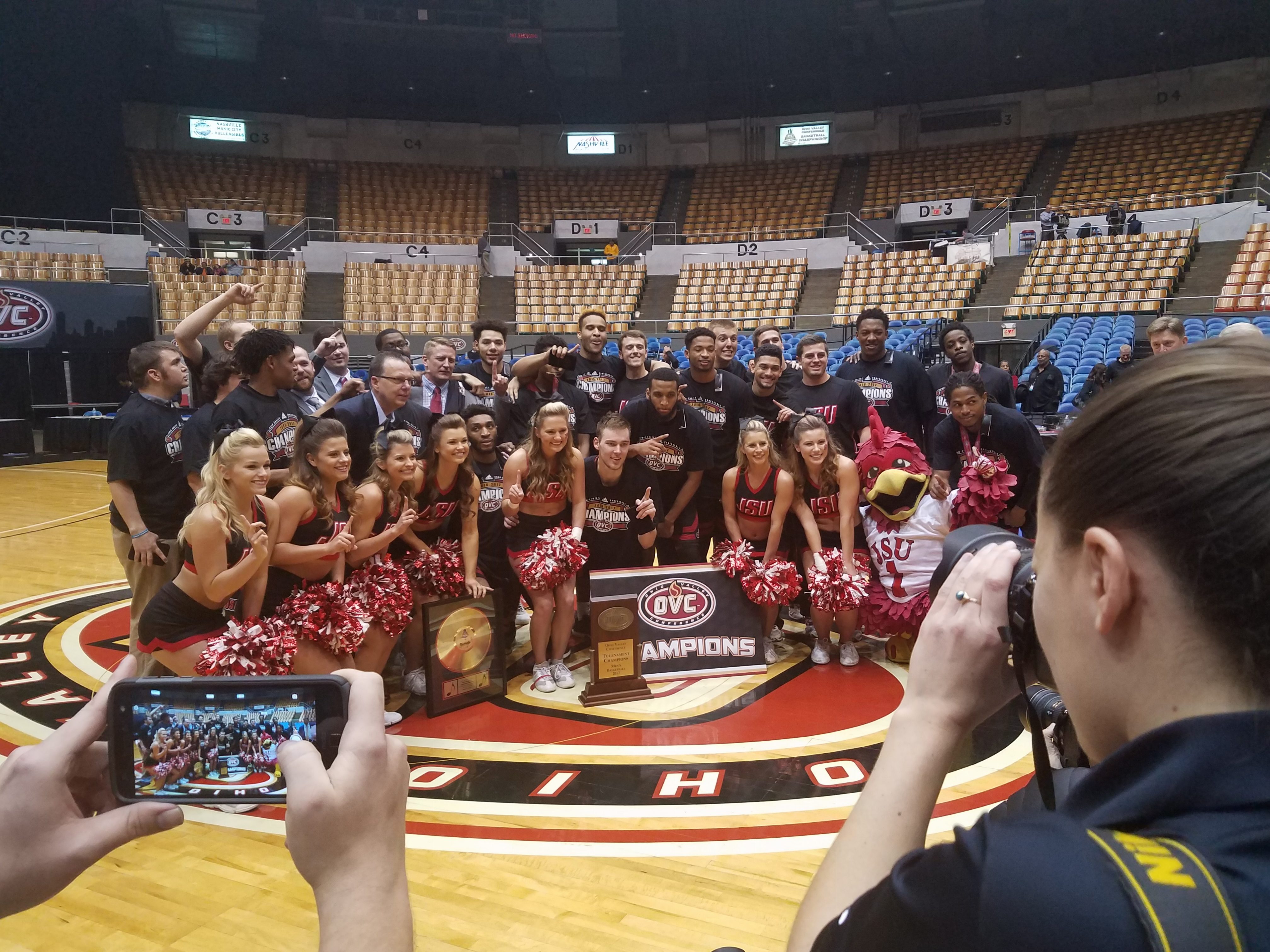