The Racers Outlast The Golden Eagles

The Golden Eagles got off to a 10-6 lead with 14 minutes in the half, as Mason Ramsey got off to a quick start to the game. The Golden Eagles would extend that lead to seven points after a couple free throws by Aleska Jugovic. The Racers just could not find the range early in the game as they were missing from close and long range early on and were stuck on six points for over five minutes until Jonathan Stark hit a three-pointer to bring them within four points. Until his hit from deep, the Racers had not hit a three and were shooting 11% for the game. Bryce Jones followed Stark's three with another and brought the Racers within one point at 13-12.

But then Mason Ramsey went back to work. The big man hit a layup, got fouled and hit the free throw to put the Golden Eagles back up four points. The Racers would hit a free throw and that would bring them within three points at the 7:41 mark of the game.

Terrell Miller would score four straight points to put Murray State up one point. But a layup by Curtis Phillips would gather the lead back again for the Golden Eagles, 18-17, with a little over six minutes left in the game and Jugovic would nail a three-pointer to extend the Golden Eagles' lead back up 21-17.

But the Racers would answer, as Jonathan Stark would nail a three-pointer to bring the Racers back to within one point. At that point, Curtis Phillips would again drive again to extend the lead back to three points. But Jonathan Stark and Gee McGhee would hit back-to-back buckets and give the Racers the lead again with 3:39 left in the half.

Starks had 14 of the Racers 29 points at the half and without that, the Racers would have been dead and buried. As for the Golden Eagles, they seemed to ease up and that allowed the Racers to close the gap in the second half of the first stanza.

The Racers would come out strong from the halftime break, going on a 8-2 run to begin the half, with Stark having six of those points in that run and running his total to 20 points as the Racers got out to a 37-32 lead.

The Golden Eagles would charge back to get closer in the game, but the Racers would go on another streak that would give them a 45-38 lead. Hakeem Rogers would make a dent in that lead, hitting a three and bringing the score to 45-41. But Murray State would answer in the form of Bryce Jones, who would hit a layup, get fouled and hit the free throw to put the Murray State lead back to seven points.

Hakeem Rogers would take it upon himself to bring the Golden Eagles closer, hitting a free throw and a three-pointer to bring them within three points. But Stark would strike again, hitting a contested layup while getting fouled and hitting the free throw, giving him 23 points for the game with 9:06 left.

Kajon Mack would answer Stark's three-point play with a three pointer to bring the Golden Eagles within three points. And with a layup from Hakeem Rogers, the Eagles would pull within one point with a little under eight minutes left in the game.

Rodgers would split free throws with 3:35 left in the half to give the Golden Eagles a one point lead and Ramsey would do the same with 2:25 left in the game. But Jonathan Stark would go to work once again, hitting a floater in the lane to knot the game at 60. Following a missed Tennessee Tech basket, Stark would strike again, this time rebounding his own miss and putting it back in, giving Murray State a 62-60 lead with 1:27 left in the game.

Tennessee Tech would come down and miss a shot that could have tied the game. Murray would come down and miss a shot as well. But after a fight for the basketball and a review of who knocked it out, the ball was given to the Racers with 38.8 seconds left in the game. The Eagles would get a steal and race it down the court, with Kajon Mack soaring through the lane for a game-tying dunk. A desperation heave by Stark would clank off the glass, as the game would head into overtime.

Both teams went empty on their first two possessions in overtime, as they could not convert around the rim. But the scoreless overtime was over when Gee McGhee hit two free throws to give the Racers the lead. However, they did not hold the lead long, as Kajon Mack came down and nailed a three-pointer to give Tennessee Tech a one point lead, 65-64, with three minutes left in the game. Miller of Murray State would answer the score by Mack with a layup and Mack would come right back and score again, putting the Eagles back up by one at 67-66. From there, Mack and Stark, both former Tulane University guards, would go back and forth for the rest of the overtime period.  Stark would hit a fadeaway jumper, giving the Racers the lead.  Mack then took it upon himself to keep it going, as he hit another three-pointer to give the Eagles a two-point lead in overtime as the Eagles took a timeout.

Stark, sensing his team needed him again, would answer that three of Mack's with a three of his own, giving Murray State a one-point lead with 1:26 to go in overtime. Mack would hit one of two free throws to tie the game again at 71. Stark would come down and miss a jumper and there would be a mad scramble for the basketball that would result in the basketball going to Tennessee Tech with 31 second left in overtime. Mack would miss a three to take the lead and give Murray State had a chance to win the game. But with the game on the line, Stark would miss a fadeaway jumper, sending the game into double-overtime.

In the first double overtime game in the OVC since the 2009 OVC Championship game, Bryce Jones got the scoring started with a layup off the tip for the Racers. He would get fouled and finish the three-point play to put the Murray State up 74-71. From there, the Racers would get two offensive rebounds, milking the clock more with their lead. The Racers would eventually turn it over, however, as Hakeem Rogers would steal the basketball and race down for a layup to bring the Eagles within one point.

On the ensuing possession, Bryce Jones would get fouled and go to the free throw line to hit two free throws, putting the lead for Murray State back at three points. And off a Tennessee Tech miss, Murray's Jonathan Stark would hesitate and then drive to the rim to give the Racers a five-point lead. The Eagles were not done though, as Jugovic would come down and hit a three-pointer with 2:08 seconds left, bringing the Eagles within two points. And after a steal on the defensive end and a Racers foul, Ramsey would come down and hit two free throws to tie the game. The Racers would not give up the lead for long, as Stark would come down and hit a jumper to give them the lead again. But with one minute left, Curtis Phillips would hit a layup and get fouled. The three-point play would give the Eagles a one-point lead. Jonathan Stark would drive to the rim and get fouled on the ensuing possession, sending him to the free throw line where he would hit two free throws and put Murray State ahead.

Tennessee Tech's Curtis Phillips would answer again, hitting a layup and giving the Eagles a one point lead. Starks would come down and miss a jump shot this time and after a jump ball situation, Tech would have the ball with 15.5 seconds left. Murray State would foul Curtis Phillips, who would hit one of two free throws and give Tennessee Tech a two-point lead with 13.7 seconds left. But Jonathan Stark still had some magic left, as he came down and calmly drained a three-pointer with 6.1 seconds left in overtime, giving Murray State a one-point lead. A last-second three by Rogers would fall short for the Golden Eagles, as Murray State would outlast the Eagles in this one.

Jonathan Stark would lead the Racers with 41 points, including his game-winning three-pointer. Behind Stark, Terrell Miller had 14 points along with 12 rebounds. Rogers would lead the Golden  Eagles with 20 points for the night followed by 17 from Kajon Mack.

Murray State head coach Matt McMahon had this to say about his star guard Stark and his shots (40 of them): "I was glad he shot the 40th one because that was a big one."

As far as the Golden Eagles, Kayjon Mack was definitely ready to admit that this game will be motivation for next year, "This one is definitely going to add fuel to the fire for everyone that is coming back."

The Eagles run is over while the Murray State Racers move on to play Morehead State on Thursday night. 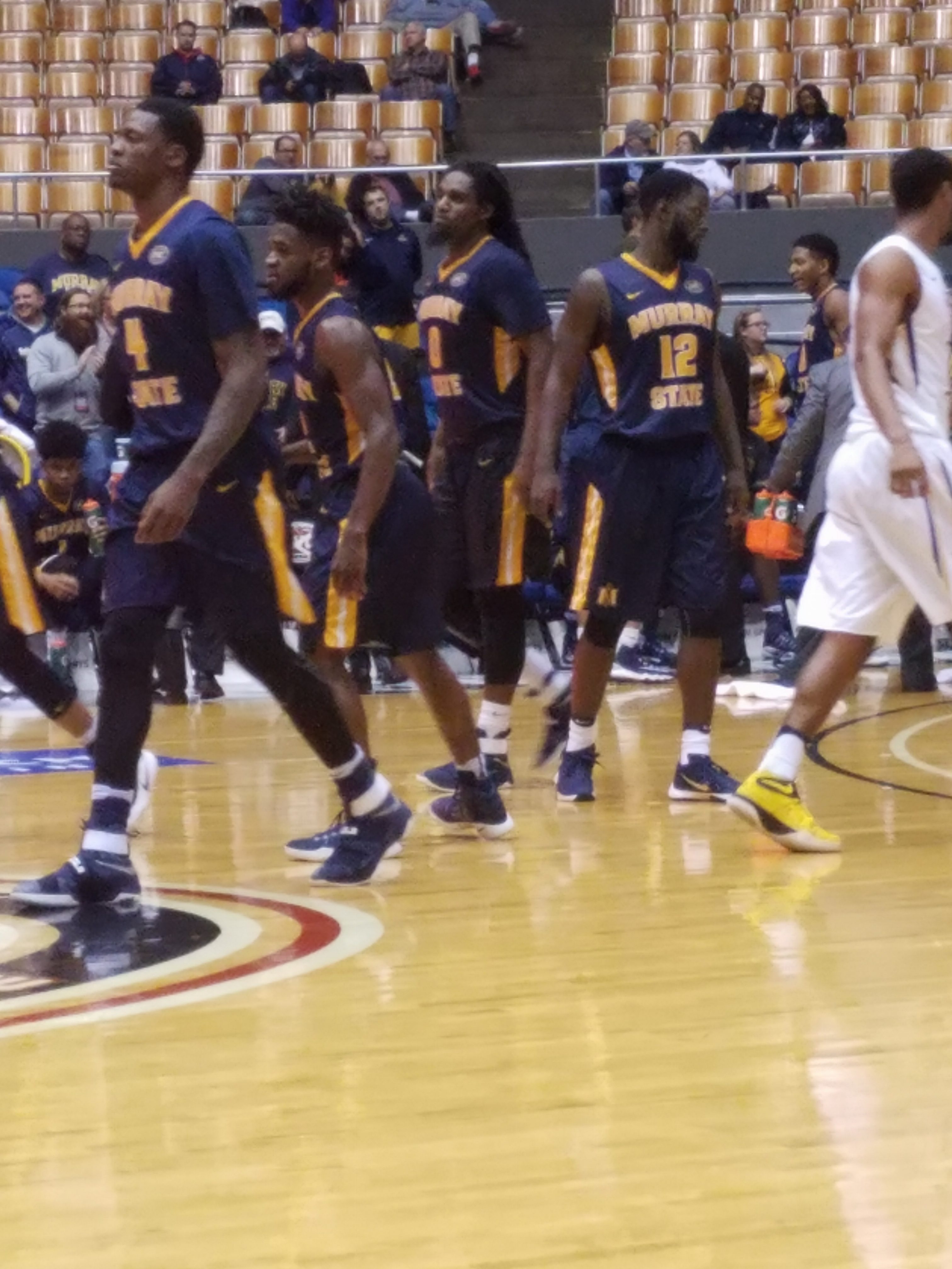